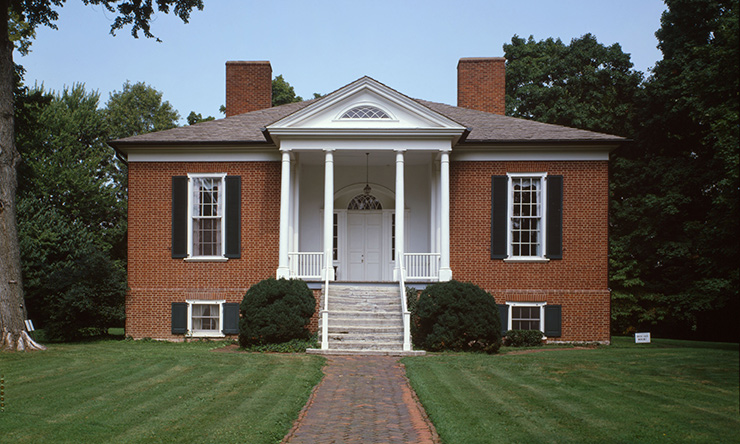 Farmington Home was built from a plan by Thomas Jefferson and completed in 1816 for John and Lucy Speed, wealthy hemp plantation owners. Their magnificent house and furnishings are representative of the period between 1815 and 1840. To be a guest here was a cherished event. In fact, Farmington’s most famous guest was Abraham Lincoln, who visited the Speed family in 1841.

Farmington was typical of its time in farm management and slave life. Every part of the enterprise was made profitable by the labor of slaves who were also frequently hired out to neighboring plantations. Births, deaths, purchases, slaves and occasional runaways contributed to the flux of the slave population. The fertile land and bustled with the labor of slaves and enriched the Speed family business.

One slave named Morocco was so trusted by John Speed that he traveled as his business courier. At John Speed’s death in 1840, fifty-seven slaves were listed as inventory. Daughter Susan Speed, who later established The Home for Friendless Women, received five slaves. Although “willing” enslaved people was common practice, it contributed to the devastating break-up of slave families. Another daughter, Peachy Speed, took over plantation management in 1845. Prior to that time, she had received slaves upon her marriage to Austin L. Peay in 1832.

Some Speed family members abhorred the practice and freed their slaves. According to court documents in 1845, Lucy G. Speed, John’s widow, and their daughter Lucy F. Breckinridge emancipated three slaves — Rose, Sally and her son Harrod. Other Speed family members, such as sons J. Smith, Joshua, Phillip and daughters Mary and Eliza freed their slaves between 1863 and 1865. Peachy Speed Peay, whose husband Austin had died during the 1849 cholera epidemic, sold Farmington in 1865. With slavery illegal after the Civil War, she probably had little choice.