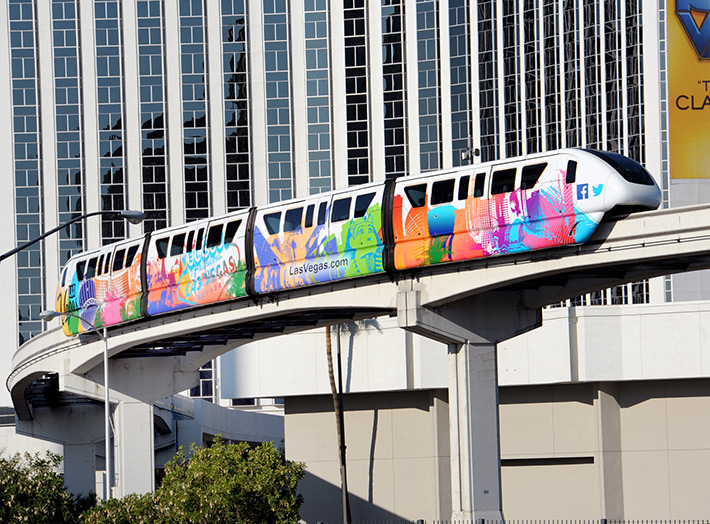 Las Vegas Transportation is anchored by McCarran International Airport (LAS) is America’s 7th busiest passenger airport. Within its two over-sized terminals, you will notice plant of art, WiFi and the distinction of having over 1200 slot machines. Though LAS has pelnty of lounges, dining options are somewhat limited for an airport of this scale, since the powers that be prefer that you dine on The Strip or Downtown. Surprisingly, LAS airport includes an Aviation Museum that chronicles when aviation first arrived in Las Vegas. The shops at LAS will eagerly tempt you with luxurious gift items before you leave town. LAS AIRPORT TERMINAL MAP.

Car Rentals: Alamo, Avis, Budget, Rent-A-Vette, Hertz and Thrifty. Tip: From the airport, I-15 Freeway is a good option when headed north of Caesar’s Palace or to Downtown. Otherwise take Paradise Road.

Taxis are plentiful, but there are long lines to board when big trade shows like Comdex, NAB and Consumer Electronics Show are in town. Taxis cost $15 per person to the Strip and $20 to downtown. Uber & Lyft cost slightly less. If going on the east side of The Strip, ask the driver to take Paradise Road. If going the west side of the Strip when its not commute hour, ask the driver to take I-15 Freeway north, then exit at the first Sinatra Drive exit. If going downtown, take I-15 Freeway north during non-commute hours, otherwise take Paradise Road, northbound. Shuttles to the Strip cost $10. Limousines to The Strip cost about $30. If you are headed Downtown, add $10.

There is no passenger train service to Las Vegas. But, the good news is Virgin Trains USA plans Los Angeles-Las Vegas High Speed Rail Corridor service in the not to distant future. See this important article about Interstate High Speed Rail.

Las Vegas Monorail provides relief to many visitors stuck driving or walking Las Vegas Strip during hot or cold weather. the 4-mile long monorail runs up to 50 mph to these 7 stations on the east side of Las Vegas Strip:

If you plan to visit a lot of casino-resorts on the east side of Las Vegas Strip, its best to purchase a 1-day pass or a 3-day pass. Otherwise, it costs $5 per ride. Service is every 3-5 minutes from daily, 8a–2a. Now if only the casino-resort owners would fund monorail extension south from MGM Grand Resort to LAS Airport, instead of bowing to pressure from taxi and limo operators.

Casino-Resort owners on the west side of Las Vegas Strip don’t want their patrons exhausted either, so they built 3 disconnected but, nonetheless Free trams that run every 3-7 minutes:

Downtown Transportation Center is located at 300 North Casino Center and hosts extensive Bus Rapid Transit service. You can catch a bus next to a casino resort on Fremont Street that travels frequently to the shopper’s bonanza called Las Vegas Premium Outlets.

The Deuce is a series of double-decker, air-conditioned buses that run from the Strip to Downtown. Seats are stiff, but views from the upper deck are great. If your feet can’t take it any more or you’ve had a few drinks, its a good option for 1-2 people. For 3 in a group, the taxi is a better value, but you don’t get upper deck views in a taxi. Board The Deuce at large resorts on the Strip. The cost is $5 for 2-hours or $7 all day.
PHONE: Toll Free: 800-228-3911

Las Vegas Freeway Network is oriented to The Strip, Downtown and a few east-west residential areas, is severely challenged by population growth. Fortunately, County Route 215 is being upgraded to I-215 Freeway status to encircle the metro area. This is important to travelers because it allows more residents to get across town without funneling all north-south traffic to I-15 Freeway next to The Strip and Downtown. Allow extra time on the freeways during commute hours.

For driver orientation, The Strip is a landscaped boulevard whose northern part begins at Sahara Blvd and southern part ends at Russell Road, just below Mandalay Bay Resort.