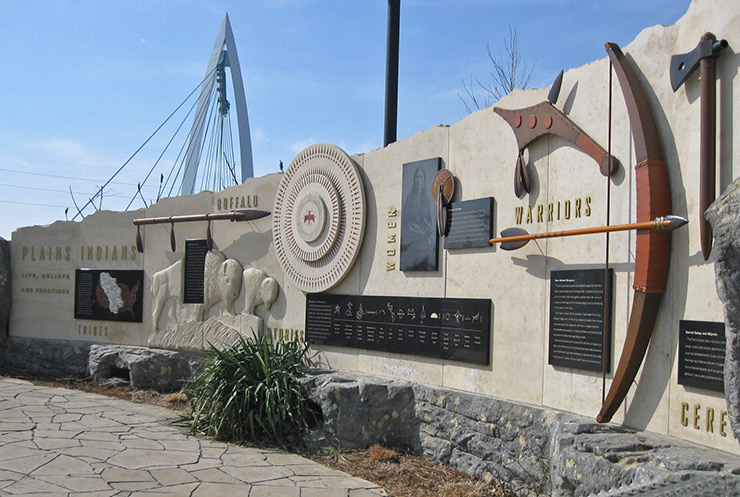 Keeper of the Plains monument, Wichita; (c) Soul Of America

Situated near Interstates 35 and 135, and only 162 miles from Oklahoma City, 176 miles from Tulsa and 199 miles from Kansas City, Wichita possesses a great deal of history. The city is named after the Wichita Indians who originally inhabited the area before it became a trading post at the confluence of the Big and Little Arkansas Rivers in the 1850s. They eventually established the Chisholm Trail, named after pioneer Jesse Chisholm.

Around 1872, the city began to flourish with the arrival of a branch of the Santa Fe Railroad, followed by a huge influx of cattle drives from Texas–some 350,000 head–that initially moved through. The cowboys stayed and established cattle farms here and a true “Cowtown” was born. Crops followed in the 1890s and within two decades oil surfaced, again significantly altering the direction of the economic landscape. Then there was the aircraft industry in the 1920s that eventually earned Wichita the moniker, “Air Capital of America.”

Hamburger fans will be interested to learn that Wichita is the home of White Castle. The first of its kind for its small square hamburgers, the chain was founded here in the early 1920s by Walter Anderson and has been an Americana staple in many cities for decades. Now the largest city in Kansas, Wichita has a population of approximately 500,000 people in the metropolitan—Sedgwick County—area, and hosts 3.5 million visitors each year.

There are many African American forefathers and foremothers who have left an indelible mark on the city’s history – both past and present. That history includes the story of The Wichita Monrovians, an all-Black professional baseball team here in 1922, named for Monrovia, Liberia in Western Africa. These ballplayers were so skilled that they defeated both black and white teams, raised funds for a local African American children’s home, had their own ballpark and at one time, defeated the Wichita (Ku Klux) Klan baseball team.

Wichita is the location of what is believed by many to be one of the first lunch counter sit-ins in the country at Dockum Drug Store, a now defunct Kansas chain that had locations downtown and at what would be considered Wichita suburbs. It occurred in summer 1958, following Martin Luther King, Jr. and Mahatma Gandhi’s example of non-violent protests. Many notable African Americans have roots in Wichita. These folks include Football great Barry Sanders, Broadway actress and singer Karla Burns, Hattie McDaniel and Gwendolyn Brooks.

African American Museum
DESCRIPTION: Located downtown in the Old Calvary Baptist Church built in 1917; at that time, it was the heart of Wichita’s black community; in the mid-1990s, it was placed on the National Register of Historic Places; its collection encompasses a wide variety of books, artifacts, paintings, quilts, textiles, sculptures, metal works, works on paper and other items pertaining to Wichita’s role in the Civil Rights Movement, jazz and blues musicians, entrepreneurs, athletes, luminaries and more reflective of African American culture.
ADMISSION: Under $10, Age 4 and under enter Free
DAYS & HOURS: Mon-Fri 10a-5p
ADDRESS: 601 North Water Street, Wichita, KS MAP
PHONE: 316-262-7651
WEBSITE: http://tkaamuseum.org

Barry Sanders Football Field
DESCRIPTION: Located in McAdams Park, the field is named after this football great who was born and raised here. The park is also the site for both the annual Juneteenth Festival and Wichita Black Arts Festival over Labor Day Weekend.
ADDRESS: 1329 East 13th Street North, Wichita, KS MAP

Chester Lewis Reflection Park
DESCRIPTION: Located downtown and named after this state and national Civil Rights leader born and raised in Hutchinson, Kansas, the park contains several bronze sculptures by artist Georgia Gerber, one of which is The Lunch Counter, a symbol of the struggle for equal rights by African Americans at lunch counters across the country.
ADDRESS: 205 East Douglas Street, Wichita, KS MAP

Kansas Aviation Museum
DESCRIPTION: Provides a great overview of the city’s early aviation history which has positioned Wichita to producer of 42% of the world’s general aviation aircraft; located in the original Wichita Municipal Airport Terminal Building, the facility—built in the grand art-deco style—once served as a primary postal delivery site for aviator Charles Lindberg, as the origination point for custom-built jets for the rich and famous and occupation by the U.S. Air Force beginning in the 1950s as a staging point for their military operations; the museum collection encompasses a wealth of aviation related artifacts, historic photographs, aircraft–both inside and out on the tarmac—and themed exhibits. Among the latter is an exhibit detailing the life and work of the many African American men and women aviators who left an indelible mark on the landscape here, within and outside of the aviation community.
ADMISSION: Adults $8, Age 65+ $7, Age 4-12 $6, Age 3 and under enter Free
DAYS & HOURS: Mon-Sat 10a-5p, Sun Noon-5p
ADDRESS: 3350 South George Washington Blvd, Wichita, KS MAP
PHONE: 316-683-9242
WEBSITE: http://www.kansasaviationmuseum.org

Kansas Sports Hall of Fame
DESCRIPTION: Located in the historic Wichita Boathouse downtown and founded in 1961, it honors those whose involvement in sports brought pride to Kansas and inspires future generations of Kansans to achieve athletic greatness and as leaders with integrity off the field; multifarious exhibits detail the athletes, teams, coaches and others that made indelible marks in their respective sports.
ADMISSION: Free, donation suggested
DAYS & HOURS: Mon-Fri 10a-4p
ADDRESS: 515 South Wichita Street, Wichita, KS MAP
PHONE: 316-262-2038
WEBSITE: http://www.kshof.org

Museum of World Treasures
DESCRIPTION: Located in Old Cowtown and founded in 2001, the museum began as a collection of “stuff” in a local entrepreneur’s basement, where he had amassed interesting and unusual items during his many global adventures; since that time, the collection has grown in size, reputation and popularity to become one of the most popular attractions in the country; collections include Tuskegee Airman uniforms, photographs and artifacts, extensive militaria from the Revolutionary War through the Vietnam War, American Pop Culture, Egyptian mummies, a presidential gallery, deep sea exploration, and an incredible collection of dinosaur fossil exhibits.
ADMISSION: Adult $9, Senior $8, Youth $7, Age 3 and under enter Free
DAYS & HOURS: Mon-Sat 10a-5p, Sun Noon-5p
ADDRESS: 835 East 1st Street, Wichita, KS MAP
PHONE: 316-263-1311
WEBSITE: http://www.worldtreasures.org

Sedgwick County Zoo
DESCRIPTION: One of those is also one of the largest attractions in the state of Kansas, the exhibits here detail animal life in Asia, Africa, North and South America and Australia, with concentrated exhibits about tigers, reptiles and amphibians, domestic farm animals and penguins, among others.
ADMISSION: Age 12-61 $14, Age 62+ $12, Age 3-11 $9, Age 2 and under enter Free
DAYS & HOURS: daily 9a-5p
ADDRESS: 5555 Zoo Boulevard, Wichita, KS MAP
PHONE: 316-660-9453
WEBSITE: http://www.scz.org

The Keeper of the Plains
DESCRIPTION: One of the most remarkable landmarks in the entire country, the Keeper, situated at the confluence of the Little and Big Arkansas Rivers, is a five-ton, 44-foot sculpture soaring more than 30 feet in the air; designed by Blackbear Bosin, a Kiowa-Comanche Indian and internationally recognized artist, muralist and designer, the statue is surrounded by the Keeper of Plains Plaza that incorporates the four elements of life–earth, air, fire and water–in four “Rings of Fire,” set ablaze every evening (weather permitting) with educational signage, Native American music and quiet places for reflection; it is also flanked by two stunning pedestrian bridges suspended from uprights fashioned to resemble giant arrows, and on either side of the river shorelines visitors enjoy pedestrian and bike paths with verdant riverbank landscaping that extend into the heart of downtown.
ADDRESS: 650 North Seneca, Wichita, KS MAP
PHONE: 316-350-3340

Mid-America All-Indian Center
DESCRIPTION: Located adjacent to the Keeper of the Plains and dedicated to educating people about and preserving the heritage of the American Indian, the center is a multipurpose facility with a museum, Gallery of Nations, and gift shop.
ADMISSION: Adults $7, Age 55+, Students and Military $5, Age 6-12 $3, Age 5 and under enter Free
DAYS & HOURS: 10a-4p
ADDRESS: 650 North Seneca, Wichita, KS MAP
PHONE: 316-350-3340
WEBSITE: http://www.theindiancenter.org