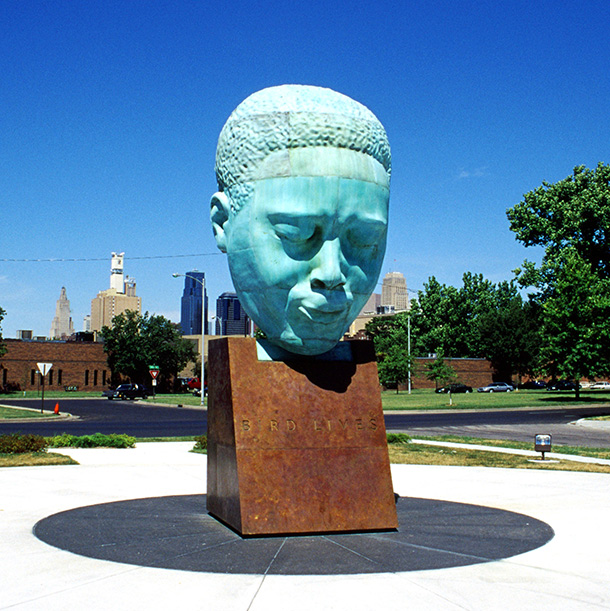 To Black Jazz and Blues musicians, “Wide Open” Kansas City Jazz meant steady work in the 1920s and through the 1930s Great Depression. Steady work attracted artists with Blues and Jazz backgrounds from Omaha, Tulsa, Oklahoma City, St. Louis, Memphis, Chicago, and New Orleans. Such a confluence enabled bandleaders to populate their bands with many contrasting and complimentary artists. The Bennie Moten Orchestra, based in Kansas City, was one of the best and earliest swing jazz bands in the country in the 1920s. Moten is most credited for establishing the routines of playing fancy downtown nightclubs in the evening and the dance halls late at night to keep the money flowing. He and George Lee helped establish a modicum of respect for black musicians during the Segregation Era.

Pianist Julia Lee, the sister of George Lee, earned a reputation for playing “money tunes” that European American high rollers wanted to hear with a jazzy twist to it. She was well paid for it. Many a bandleader took her lessons in money making to heart. Bandleader Buster Smith gave a break to future bandleader Jay McShann, when he needed a pianist one night. Jay came from more of a Blues background. Other members of the band had jazz and gospel backgrounds. And other musicians counted classical and swing music as great influences. So when Jay McShann hosted one of the greatest saxophone innovators, Charlie “Bird” Parker in his band from 1939 to 1944, his Blues style influenced Parker. All musicians influenced each other, particularly when Kansas City had battle of the band nights. Jazz great Lester Young and Blues sensation Mary Lou Williams made their careers here.

Though Charlie “Yardbird” Parker or “Bird” for short, (1920-1955) was born and raised in Kansas City, Jay McShann recalls that he did some musical “wood shedding” in the Ozarks before returning to Kansas City. And boy did he return. With a Blues-influenced, fast-paced, jumping between the scales, but always in rhythmic, he liberated the saxophone. Even the great John Coltrane has a debt to Charlie Parker. When Charlie Parker finally went to New York to play with Dizzy Gillespie, Thelonious Monk, Coleman Hawkins and to mentor Miles Davis, his brash, innovative style of play took those musicians and jazz in general, by storm. Like many of the world’s greatest artists, Charley Parker is honored more in death than when he lived.

A barbershop at the corner of 18th & Vine was a sort of information clearinghouse for musicians to find were the weeks gigs in town could be had, who was sick and who was leaving one band for another. That kept local bands busy. The Theater Owner’s Booking Association in Kansas City was magnet attracting all world-class jazz musicians to do a stint here, including Louis Armstrong, Ella Fitzgerald, and Duke Ellington. Some stints in Kansas City lasted a lot longer. Count Basie got stuck here on a western circuit swing and made Kansas City his second home for years. The musical scene was so strong that even Charlie Parker stayed home to continue honing his craft while fellow band members went to New York for other gigs. With such a concentration and continuous influx of talent, this musical intersection was destined to become a Mecca for jazz legends and place of nurturing for young jazz talent.

By 1942, the shift to New York and Chicago became evident. Kansas City began a slow fade into obscurity when musical tastes changed to R&B and Rock n’ Roll record players in the 1950s. Nevertheless, Kansas City has long been recognized throughout the world for its contribution to Jazz and Swing. This legacy is wonderfully captured at he Jazz Museum in the 18th & Vine district and the music can be experienced at the beautifully restored Blue Room. Today, nationally prominent music groups from all music styles including Reggae, Rock, Soul and R&B frequently play to Kansas City audiences, insuring that music innovation will continue in this great city of the Midwest.