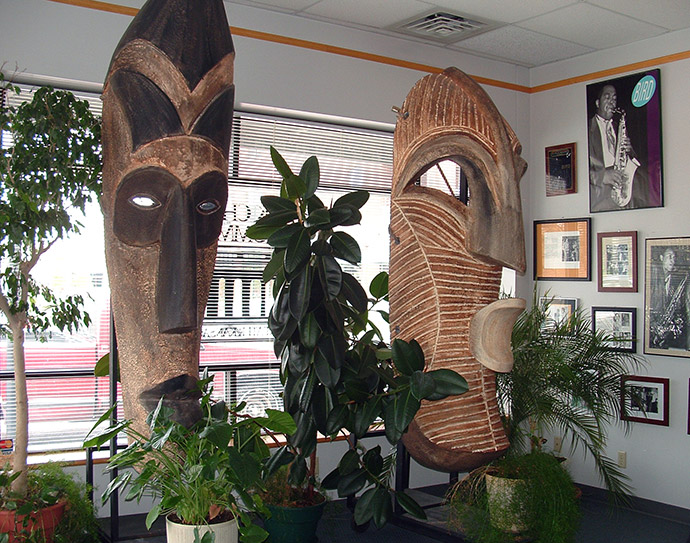 Lucille Bluford Library
DESCRIPTION: Named in honor of the Editor and Publisher of The Kansas City Call, a weekly newspaper dedicated to the African American community; The library is a tribute to this nationally recognized figure who many consider the city’s most authoritative civil rights pioneer and stateswoman.
ADDRESS: 3050 Prospect, Kansas City, MO
PHONE: 816-924-1184

Emily Fisher Gravesite
DESCRIPTION: In 1995, a local citizens group raised funds to place a granite marker at the gravesite of Fisher, who is buried in Woodlawn Cemetery; Fisher was a freed slave who, over 100 years ago, operated a successful hotel in Independence and was later credited with inventing a healing slave. The hotel was a noted stopping point for travelers heading West along the California, Oregon and Santa Fe Trails. Information about her life is featured at the National Frontier Trails Center in Independence.
ADDRESS: Noland Road and Pacific Street, Independence, MO
PHONE: 816-325-7111

Charlie “Bird” Parker Gravesite
DESCRIPTION: Born in Kansas City, Kansas in 1920, Bird with a healthy assist from Dizzy Gillespie (1917-1993), deserves the lion’s share of the credit for taking “Swing Jazz” into “Bebop” era. The significance of this genre shift is manifest in the growth of small jazz groups instead of large jazz bands; Bebop, due to its requirement for a higher understanding of harmonics and individual musical skills, set the stage for modern jazz. Ahead of his time, Bird was better recognized for his musical genius after his death in New York. Fans wrote “Bird Lives” on sidewalks and buildings as a tribute to him. Parker played the tuba in high school and later purchased a saxophone, which he taught himself to play. He is most credited for developing the “Bop” style of Jazz and many of his works became Jazz standards. This world renown jazz saxophonist is buried in Lincoln Cemetery.
ADDRESS: 8604 East Truman Road in Jackson County, Blue Summit, MO

Quindaro Ruins
DESCRIPTION: Archaeological efforts are underway to preserve this Underground Railroad Site in the free state of Kansas, situated off the Missouri River, up a bluff. The site provides a rare window into the 1800s, since the area between the river and the ruins is undeveloped. Tours available.
ADDRESS: 27th Street and Sewell Avenue, Kansas City, KS
PHONE: 913-342-8683

John Brown Monument
DESCRIPTION: Near the hear of Kansas City, Kansas is a statue which pays tribute to the great John Brown, one of the nation’s early day opponents of slavery.
ADDRESS: 27th Street and Sewell Ave, Kansas City, KS
PHONE: 913-321-5800