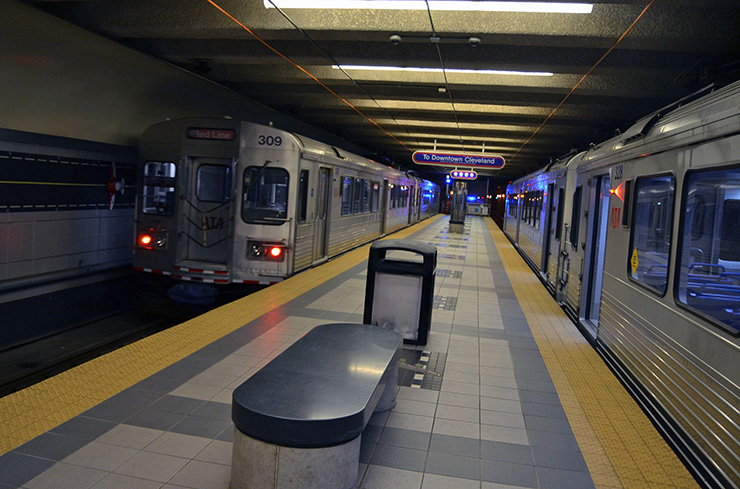 RTA rapid transit runs every 15 minutes from CLE Airport for the 27-28 minute ride to downtown Cleveland. RTA CLE Airport Station is located on the lower level of the main terminal. To reach the RTA station, travelers should use the elevators or escalators located in the center of the ticketing and baggage claim levels. Super Shuttle: is available for the ride to downtown Cleveland. Make your reservation via 800-258-3826. Taxi cabs at the ground transportation level are plentiful. Car Rentals: Alamo, Avis, Budget, Enterprise, Hertz, National, and Thrifty provide service via the rental center. Board the Rental Car bus as you exit the any terminal.

The city plans to build a Intermodal Transportation Center near the Amtrak station and between City Hall. When complete, the center will better connect Amtrak trains, RTA light rail, Greyhound and taxis.

RTA Subway and Light Rail system features 4 routes in the Cleveland metro area, with some routes featuring service every 15 minutes:

African-American Heritage Trail of Cleveland
Researched by the Cleveland chapter of the National Association of Black Journalists, the African American Heritage Trail of Cleveland encompasses some 16 historic sites and attractions, for those desiring a soulful look at Cleveland’s past. The stories of the numerous notable Black Clevelanders and the events that shaped not only the African American but also the surrounding communities, and beyond, are educational and inspiring; learn the history behind the John O. Holly General Mail Facility, St. John’s AME and St. John’s Episcopal Churches, Garrett A. Morgan, Woodland Cemetery, the Phyllis Wheatley Association, Eliza Bryant Center, Karamu House and much more on this guided tour showcasing the grandeur of Cleveland’s black history
PHONE: 216-921-4246
WEBSITE: http://www.aaheritagetrail.com

Walking Tours of Cleaveland
The name “Cleaveland” reflects the original spelling of the city’s name; these tours provide an insiders view of the city by walking, luxury sedan or van available for groups of all sizes; covers a highlights downtown including the Civil War Memorial, Stops on the Underground Railroad, WWII submarine, the bell that tolled when Abraham Lincoln’s body was brought through town, the building where John D. Rockefeller kept his office; West Side Market, stately Victorian homes and the birthplace of John Heisman are some of the spots featured on the Ohio City/West Side Market tour
PHONE: 216-575-1189
WEBSITE: http://www.clevelandwalkingtours.com

RTA Waterfront Line
When you’ve had enough walking, this light rail transit line lets you take in nice views of Cleveland’s most popular districts downtown for only $1.50 per ride; From Tower City Station, you can transfer to the RTA Waterfront line to see stunning views of The Flats entertainment district along Cuyahoga River, Cleveland Browns Stadium and Lake Erie; the line also stops at the Amtrak Station, and Northcoast Station for a short walk to the Rock & Roll Museum
PHONE: 216-566-5100
WEBSITE: http://www.riderta.com

Cleveland-Akron Freeway Network has an oddly designed network of freeways and a tollway in the southern suburbs. Nevertheless, the freeway network is a victim of inadequate expansion of the RTA rapid transit system in three corridors.