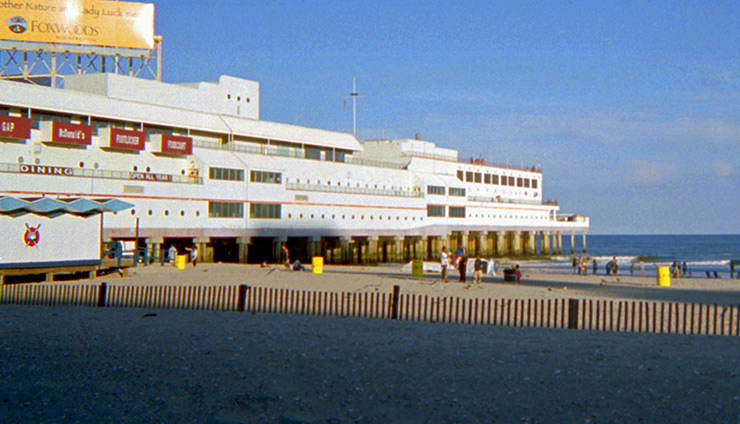 Atlantic City History begins with a New Jersey physician, Dr. Jonathan Pitney, who envisioned a bathing village and health resort on Absecon Island. He convinced a group of businessmen to help him develop South Jersey. In 1852, he received a railroad charter from Camden to Atlantic City. Engineer Richard Osborne designed and named the location Atlantic City. The first train carrying officials, guests and newspapermen arrived on 1 July 1854. Newspapermen spread the word and Atlantic City became a vacation destination.

Unlike many other resorts of the time, the eight-mile-long beach is a public park owned by Atlantic City and three suburban communities. Consequently, there was and is no charge for beach bathing. The world’s first boardwalk was built in Atlantic City in 1870 as an elevated wooden walkway designed to keep sand out of the hotel lobbies. More shops opened as people casually strolled along the boardwalk and word spread. More importantly, its location between NYC, Philadelphia, Baltimore and Washington DC vaulted Atlantic City into its cherished position as the world’s leading summer resort for decades.

As more European American patrons came to Atlantic City, it increased the need for low-pay service workers such as maids, cooks and doormen. In the years preceding desegregation, those jobs represented an economic green light to African Americans. Though it was a struggle for better paying jobs, for a handful of African Americans, Atlantic City offered more than servant positions. In fact, the business-savvy Sara Spencer Washington became Atlantic City’s first African American millionaire.

In 1978, with its image as a seaside resort slipping, Atlantic City reinvented itself by legalizing casinos along the Boardwalk. For many, casinos opening in an established community sent a mixed message — Vice vs. Prosperity. Some prefer only the old AC where you frolic on the beach, ate salt-water taffy and chocolate fudge along the boardwalk, and play in the numerous family-friendly arcades at the Steel Pier.

Other visitors prefer knowing you can still do most of those things in AC, but also enjoy the excitement of beach bars, gambling, casino lounge acts like Las Vegas and higher tax revenue for a cleaner beach. Only time can fully determine which side of the equation has greater value to the community. Regardless of one’s opinion in the subject, two important points are undeniable. Many African Americans found good-paying jobs in the casino resorts. And Atlantic City is one of the most visited destinations by black travelers on the East Coast.

Miss America Pageant began in 1921 to extend summer business for a week after Labor Day. The nationally televised pageant was a look-but-you-can’t-touch event for people of color, until Vanessa Williams from New York changed that in 1983. Though her talent dazzled the judges and fetched her the crown, an epic milestone in American racial progress had passed. For the first time African American beauty was publicly acknowledged and celebrated on a national stage. Even the runner-up contestant was African American.

Every Black supermodel in America should salute that date as well, because bookings for their talent in fashion shows and magazines accelerated after September 1983. Since then, more women of color have won this and similar pageants that strive to be a meritocracy with all races of beautiful women.

Sadly in 2005, the Miss America pageant left Atlantic City. But in other ways, the non-Trump casino resorts make Atlantic City look much brighter.