Active Holiday services lived up to the Jamaican slogan, “No problem”, airport-to-airport service with everything covered in between. We never heard “Soon Come”. I came in a few days early and was able to see the Jamaican Racing team do their Mo’ Bay to Lucea Pepper Ride on Thursday morning, a 50 mile out and back ride. They left at 7 am and were back at 9 am. These were our guides. — Roy Taylor

They rode with us over the next three days, maintained our bikes, escorted us through towns, and coached novice and experienced cyclists up and down Black Mountain. We had two members of the Jamaica Constabulary Force escort us on motorcycles. They blocked traffic at stoplights, created a lane for us in busy areas and in a few cases, carried both cyclist and cycle up hill.

The roads from Negril to Port Antonio were close to perfection. After a couple hours, we stopped looking for pot holes and road debris. No grunting screams of holes breaking the tranquil silence. Along the way, we saw workers removing broken glass, discarded debris and automobile castoffs. As a cyclist who has ridden in cities across the USA, most American roads are not this clean. Jamaican drivers are not accustomed to cyclist on the roads, but in most situations, they gave us more than 3 feet clearance regardless of our motor cycle escort.

Cyclists flew in on Thursday morning and were picked up at Montego Bay Airport. They were taken to Active Holidays Welcome Center. To my pleasant surprise, the staff unpacked and assembled our bikes. Boxes were stored away and cyclists were transported to Negril. We had a wonderful reception on the patio looking over the famous Negril 7 Mile Beach. We met our new comrades from across the US, Europe and the Caribbean. We almost had a United Nations of nationalities. We also met up the Jamaican Notational Cyclist Team and Mo’ Bay Cornwall Cycling Team.

After the receptions, we dispersed to various eating establishments on dining recommendations from Jennifer, our ride organizer, who didn’t tell us she was foodie. Every town we visited, Jennifer had restaurant recommendations and she communicated in I believe, four languages, not including Jamaican Patois.

The next morning, we had a hardy inclusive Jamaican breakfast and some great quick bike maintenance and repair. The ride out with motorcyclist escorts Winty and Farrakhan was great. The first day was the easiest with not a lot of serious climbing and a pleasant ocean breeze to cool us down. We stopped in the town of Lucea, half way to Mo’ Bay, where we enjoyed our lunch in the market place consisting of fresh Jamaican fruits and cocoanut water straight from the cocoanut. The second half consisted of small rollers until we made it to Mo’ Bay and stayed at the Sunrise. Many riders took advantage of free pools, gyms and beach chairs. It appeared the first day ride did not tire out some members, who were seen partying to Reggae music late into the night. Others took taxi’s into town and roamed the streets. 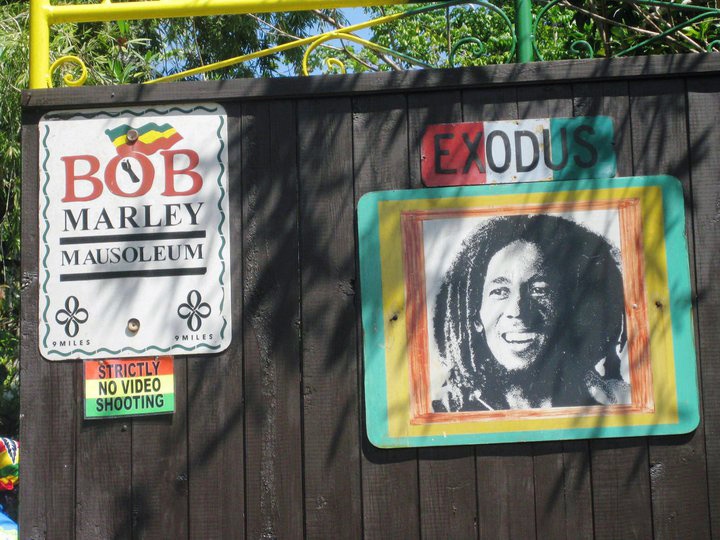 The second day of riding was definitely more challenging than the first in respect to length, and number of long climbs. You learned to love the westerly breeze that kept us cool, but delivered a little head wind. On most rides, the sight of a hill causes fear and panic in the hearts of novice riders. Not on the Jamaica Reggae Ride. The cyclist tour guides would come up behind cyclist who were having difficulty and place a firm hand on their backs and push them up the hill. I think a few of our riders immediately moved out to the far outside and waited for their Jamaican Pushcart service, which was faster up the hill than for those of us who powered every hill.

We stopped at the home/hotel of renowned Jamaican artist, Joe James. A cute off the beaten path Hotel Gallery where we were serenaded by kids singing Jamaican folk songs. This was a beautiful little spot to rest and recover before the second leg into Ochi.

We ended our second day ride at Scotchie Jerk Restaurant and then headed over to Dunn’s River Falls by bike. After lunch, some members were not feeling the bike, so they took the bus. After 70 miles, we did more climbing … climbing the cool steps of the Dunn’s River Falls and enjoying the best massage nature can provide, gallons of water pounding against your sour muscles. After the falls, a few hardy souls rode the final leg to the hotel. Yes, a long day, but after a quick shower, we dispersed across the town of Ochi checking out another set of Jennifer’s recommendations. Jennifer made the tour bus available to us. 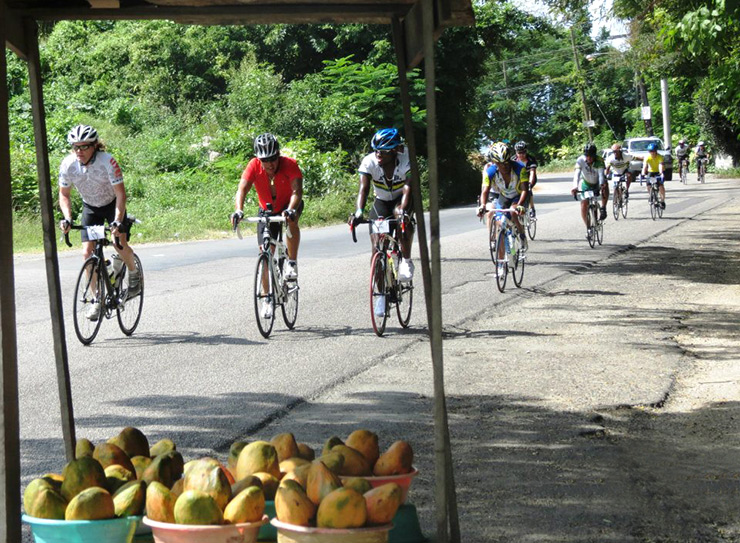 The last day was more challenging, if you didn’t like rollers. The eastern tip of the island is greener, more mountainous. We were traveling just below the northern portion of the infamous Blue Mountains, home of the finest coffee in the world. The first two days were lots of straight roads with a few climbs. The last day more climbing up and down the hillsides dropping into small hamlets, crossing multiple river bridges and then we got to Black Mountain. Not the longest climb, but definitely the winner for steepness and highest number of hairpin turns.

At the top, the folks came out and cheered with us as members came up the apex. The descent was perfect, definitely my favorite section. After a rest stop, we rolled through small towns along the coast heading to Port Antonio and finally ending at the Frenchman’s Cove, a once exclusive hotel of the rich and famous in the 1950’s. We had lunch on the beach, hung out and Active Holidays bused our bike boxes. The bikes were disassembled, loaded onto the bus and we were taken back to Ochi. Next day, we went straight to the airport.

Great adventure with great service. We had access to constant bike repair and tuning. Many of the riders were able to get massages immediately after or during the rides. We were broken into two groups, one for the folks that wanted to roll hard and the second group for those who wanted a more leisurely pace. We made quick stops to see the sights, but every ride was challenging.

This is a great ride to see the country up close and personal. We had a lot of encouragement from Jamaicans as we rolled through towns and hamlets. In one poignant moment, we rolled past a school at recess and the kids stopped everything to cheer us on. Many of riders got great cycling tips from professional cyclist and many of us were humbled by their athletic ability. This was a fantastic five-day cycling adventure.