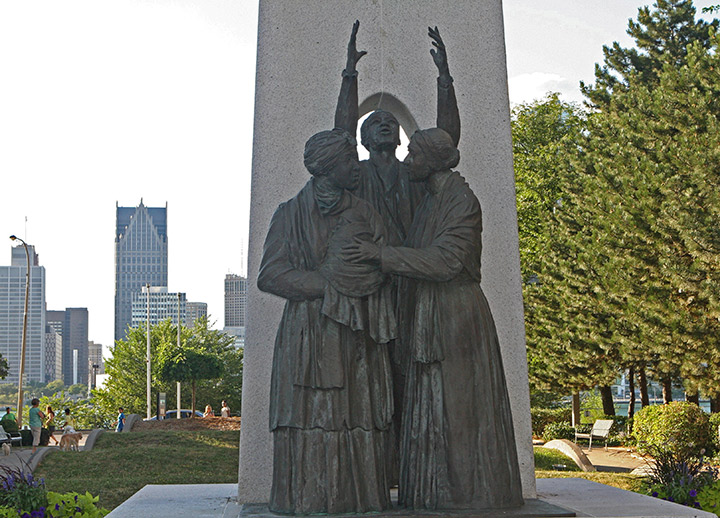 Since the 1700s, African slaves have escaped from their so-called masters and went north to freedom, crossing from Detroit to Windsor, Ontario in Canada. As such, Windsor and the neighboring towns of Puce, Amherstburg and Dresden are uplifting to spirit of every person who celebrates the best of humanity — Calvin Young, Soul Of America

Windsor-Essex Community was in the forefront of places where escaped slaves settled. It was a beacon for more than 40,000 black people who made the perilous journey from bondage to freedom in Canada. The North Star shown so brightly over Canada, urged them on despite pursuit dogs, brutal slave catchers, the hardships of hiding by day and walking long distances by night. One slight mistake would send them back to owners, who would often torture them to keep their “property” from escaping again.

In Ontario, Canada, these former captive men and women built homes, schools, churches, businesses, farms and schools. They learned professions and invented implements of commerce and trade. Thus, Windsor has a proud legacy enshrined in the North American Black Historical Museum, John Freeman Walls Historical Site and Underground Railroad, Uncle Tom’s Cabin Historic Site and other monuments. Courage, skill and industry were their companions; nurtured by the rich soil of Ontario, Canada. The spirit of our marvelous ancestors awaits and welcomes you to Windsor, Bright Star of the North.

North American Black Historical Museum
DESCRIPTION: Experience Black history in a unique Canadian a complex of historic sites and a museum. The Museum includes the Cultural Centre, a gathering place for special events and functions. The complex also includes historic structures. Connected to the Museum is the Taylor Log Cabin, a historic residence. Nazrey African Methodist Episcopal Church stands next door to complete the complex. The grounds serve for gathering, resting and transitions.  It is entirely appropriate, and even necessary, that the museum was established in Amherstburg. For Amherstburg meant the Canadian destination for freedom to many Black people escaping American slavery
ADDRESS: 277 King Street , Amherstburg, Ontario
PHONE: 519-736-5433 or 1-800-713-6336
WEBSITE:  http://www.blackhistoricalmuseum.org

Uncle Tom’s Cabin Historic Site
DESCRIPTION: This site, located 1 hour east of Windsor, commemorates the life of Reverend Josiah Henson for his contributions to the Abolition Movement and the Underground Railroad. He rose to international fame after Harriet Beecher Stowe acknowledged his memoirs as a source for her 1852 anti-slavery novel, Uncle Tom’s Cabin. Henson’s life experiences inspired Ms. Stowe’s creation of the character Uncle Tom in her 1852 outcry against slavery. As an important Canadian historic site, Tours and interpretive programs allow visitors to learn new, ever-changing facts on the life and accomplishments of Rev. Josiah Henson. Uncle Tom’s Cabin Historic Site sits on 5 acres that were part of the original 200 acres of settlement land purchased in 1841.  The site includes:

Josiah Henson Interpretive Centre houses a collection of 19th century artifacts and rare books pertinent to the abolitionist era as well as other information regarding the Reverend Josiah Henson. Included is a rare edition of Josiah’s autobiography and a signed portrait of Queen Victoria presented to him in 1877.

North Star Theatre provides the venue for a video presentation.  The Underground Railroad Freedom Gallery provides extensive information on the history of enslaved people in the United States and the flight north to freedom, as well as the life and times of Josiah Henson. The Gift Shop offers a wide selection of African art and souvenirs, as well as an extensive selection of books.

Harris House is one of the oldest structures in the area where fugitive slaves sought refuge. The Smokehouse housed in the trunk of a sycamore tree, was once used for curing and preserving meat. The Sawmill represents one of the methods used to clear the land. Profits went to support the British American Institute.

The Pioneer Church, which dates back to 1850, contains the organ from the original church where Reverend Henson preached in Dresden, Ontario. His pulpit and his church’s sign can be found in the Underground Railroad Freedom Gallery.

Henson Family Cemetery is located adjacent to the church. The Rev. Josiah Henson Memorial stone and National Historic Plaque are located here. Across the road is the British American Institute burial ground where many gravestones of the settlement have been preserved. Josiah Henson House is the dwelling where Josiah Henson and his wife Nancy lived during the latter part of his life. In 1994, the home was restored to the period circa 1850. The Henson House has been moved three times, always on original Dawn Settlement property. An area farmer, William Chapple, first used it as a museum in the 1940’s. The house was moved to the existing five-acre location in 1964 by J.D. Thomson to establish the “Uncle Tom’s Cabin” Museum.
ADDRESS: 29251 Uncle Tom’s Road,  Dresden, Ontario
PHONE: 519-683-2978
WEBSITE: http://www.uncletomscabin.org 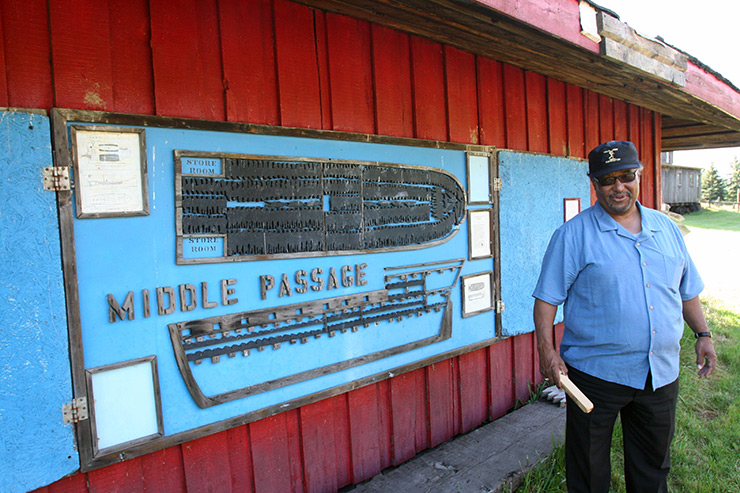 John Freeman Walls Historical Site & Underground Railroad
Built and is operated by the descendants of John Freeman Walls and Jane King Walls. They traveled on the famous Underground Railroad from Rockingham County, North Carolina to this historic site in Puce, Ontario. The development of the John Freeman Walls Historic Site began in 1976 when Dr. Bryan Walls, a Windsor dentist and great-great grandson of John, began four years of genealogical research, which culminated in the publication of the documented novel “THE ROAD THAT LED TO SOMEWHERE”. This story traces John and Jane Walls’ perilous journey along the Underground Railroad from Troublesome Creek, Rockingham County, North Carolina to Puce, Maidstone Township, Ontario. The family self published the novel in 1980. Someone in the government read the novel and thought this was an important part of Canadian-American history and erected a historical plaque designating the property a historic site.

Some say the Underground Railroad started in Columbia, Pennsylvania in 1804. Few dispute that it was started by Quaker abolitionist, Levi Coffin who used railroad terminology to confuse slave catchers. A person leading the fugitives to freedom would be known as CONDUCTOR. It would be their responsibility to get the PASSENGERS (fugitives), from one Station (safe-house) to another until they would eventually reach a TERMINAL in northern U.S or Canada, where there was freedom. Sometimes Fugitives would be transported from one station to another in false-bottom wagons

The historic walkway is similar to what a fugitive had to contend with — over grown brush, thorn trees, plus the sound of blood hounds not far behind. Fugitives had to run by night and hide by day, and at times they even had to kneel down and drink from the hoof prints of cattle in order to quench their thirst.

In the Walls Family Cemetery, there are approximately 40 family members, friends and fugitive slaves buried. At the back of the cemetery marks the resting place of John Walls, who was born a slave on the Walls Plantation in North Carolina in 1813. John escaped following the Underground Railroad to Canada where he became a freeman. The rest of his life in Puce, Ontario, he was known as John “Freeman” Walls. John passed away in 1909 at the age of 96, his wife Jane King Walls passed away a year later at 88.

John Freeman Walls Homestead, a two-story log cabin, is the focal point of this site. Built in 1846 on a foundation of four rocks, the original floor was clay, but later, wood floors and siding were added. John and his wife Jane raised nine children here. Wisely, John never allowed anyone to take pictures taken of him. He was afraid of being discovered and taken back south and enslaved again.

The Freedom Train
DESCRIPTION: In 1984 the Canadian Pacific Railroad donated a flat bed rail car to the museum. Dr. Bryan E. Walls, Allen Walls and Winston Walls with their children laid the track. After the flat car was in place, they designed and built the train caboose that symbolizes the Underground Railroad Terminus. 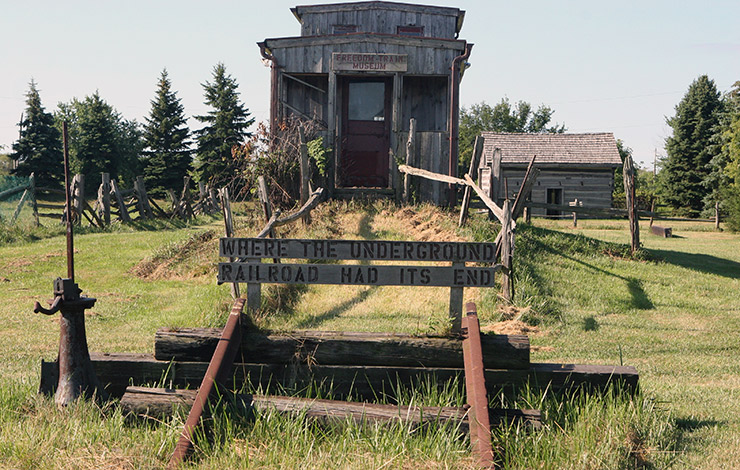 Simcoe Building
DESCRIPTION: This two-story log cabin was built in 1798 and dedicated to the memory of John Graves Simcoe who was the first Lieutenant Governor of Upper Canada. In 1793, the First Legislative Assembly of Upper Canada passed Canada’s first anti-slavery law. It outlawed the buying of new slaves, and immediate freedom was granted to those slaves who outlived their masters. This law eventually led to the abolition of slavery throughout the British Empire by 1834.
DAYS & HOURS: Open 3 months a year, open to School Students and Bus; Tour Groups welcome May 15 to October
ADDRESS: 859 Puce Road , Windsor, Ontario
PHONE: 519-727-6555
WEBSITE: http://www.undergroundrailroadmuseum.com

Sandwich First Baptist Church
DESCRIPTION: Oldest Black church in Ontario, which is located in the small town of Sandwich, (a suburb of Windsor), served as a haven for refugee slaves who were fleeing slavery mainly from the Southern United States. A group of former slaves, led by Henry Brown, John Hubbs and Willis Jackson, began an informal church group in the 1820’s. In 1840 eleven fugitive slaves from the ‘Close Communion of Baptists’ organization formed the congregation. They worshipped outdoors or in the homes of individual members until a log cabin was constructed in 1847 under the direction of Rev. Madison Lightfoot. One acre of land was donated by the Crown for a new brick church on Lot 22, West Peter Street. Fugitive slaves worked to construct the new church with hand hewn lumber and bricks. The clay for the bricks was obtained from the riverbank and fired in a hand-made kiln. In August of 1851 the church was dedicated with Robert H. Jackson as pastor. After the passing of the Fugitive Slave Act in 1850, which gave owners the right to return escaped slaves to the South, the slaves only option was to flee to Canada. Hundreds of fugitive slaves cross the Detroit River into Windsor. Sandwich First Baptist Church was usually their first stop. A hole on either side of the floor in the Sanctuary still exists. That hole allowed those who were been sought after by bounty hunters to escape into another hole located at the bottom of the Church. Built first as a log cabin in 1820, the church was rebuilt by free and fugitive slaves in 1841. Each family supplied a number of homemade color-coded bricks, some of which still exist.
ADDRESS: 3652 Peter Street,  Windsor, Ontario
PHONE: 519-252-4917
WEBSITE: http://www.sandwichbaptistchurch.ca

Buxton National Historic Site & Museum
DESCRIPTION: The site consists of a school, museum center, original log cabin, original barn with historic farm implements and sawmill, and information center. The school operated from 1861 until 1968, and is probably the only school that still remains in Canada that still exists as a school that was built by former fugitive slaves. Thousands of students were educated at the school. Pictures of these students when they were young now adorn the walls as historic photographs. Desks of varying sizes along with the original slate writing tablets are part of the school memorabilia. The log cabin was built in 1850 and lived in until 1986 by elderly sisters. The sawmill was used to construct a series of log cabins that were used by former slaves. It operated from 1856 to 1887.

The museum center has original furniture, an extensive library and collections of books for sale, information center, historic artifacts, and gift shop. One of the most prominent artifacts is a replica of the Buxton Freedom Bell presented in 1850 by the “coloured” inhabitants of the City of Pittsburgh to Rev. William King and the coloured settlers at Raleigh, Canada. The original bell now hangs in the steeple in St. Andrews Church in South Buxton. Thousands of students were educated at the school. Pictures of these students when they were young now adorn the walls as historic photographs. Desks of varying sizes along with the original slate writing tablets are part of the school memorabilia. Every Labour Day weekend Buxton hosts a “Homecoming” celebration. People who had descendants here return to their roots. It’s an inspiring time for sharing memories and creating new friendships.
ADDRESS: 21975 A.D. Shadd Road, North Buxton, Ontario
PHONE: 519-352-4799
WEBSITE: http://www.buxtonmuseum.com