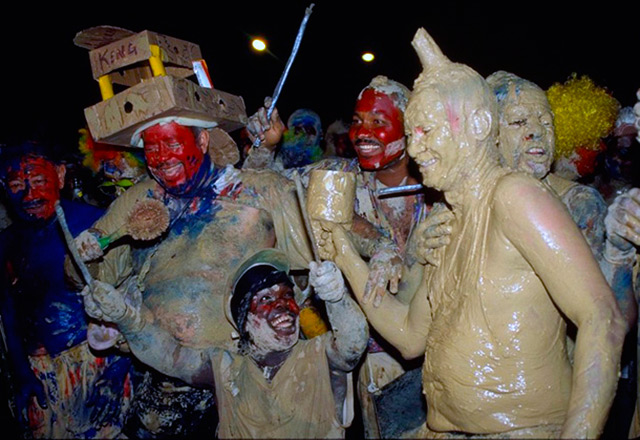 Mud party during Carnival in Trinidad

January – Eid-Ul-Fitr
On this day, the Muslim communities of both islands celebrate the New Year by focusing on the sighting of the new moon by a holy Imam. When the new moon has been sighted, the Muslims go through an entire day of feasting to break the month long fast. Visits to relatives and friends are made, gifts are exchanged, and lavish dinners are prepared.

February or March – Carnival
More than two days of masquerading, rather a whole explosive season in itself where between January 1st and Ash Wednesday and witness a culture preparing to celebrate itself. Songs are pouring from recording studios and being performed nightly in Calypso tents. Costumes by the thousand are being stitched. The process of turning more than a hundred pannists into a single, giant unit is underway. Parties or ‘fetes’, are too numerous to mention. Immediately after Christmas, there are public and private parties and daily practice sessions in the panyards, where the steel bands practice for the Panorama competition, the year‚s most prestigious musical contest. Carnival’s climax comes on the two days proceeding Ash Wednesday starting with J‚ouvert, a daybreak celebration on Carnival Monday. Festival dates for the year 2001 are February 26th and 27th Carnival Monday and Tuesday).

April – Easter Tuesday
Celebrated in the village of Buccoo, the festival consists of entertaining goat and crab races, and is known as one of the most unusual events on the islands. Though wildly fun, they are taken very seriously with prizes and prestige going to the winners.

April – Goat Races
This is a unique competitive sport on Tobago; held every year, on the Tuesday after Easter, the Buccoo village prepares for the exciting sporting event and renovates itself into a sporting arena. Complete with a 100-yard track and a growing number of spectators from all over the world, the Buccoo Goat Race Festival combines excitement, entertainment and sportsmanship from an out of the ordinary sporting event. 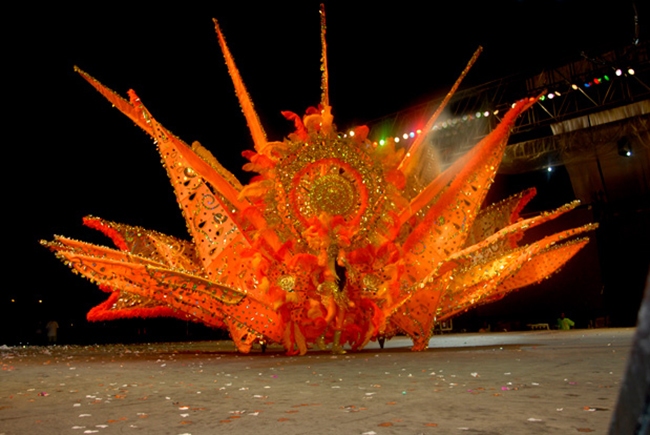 Spring – Plymouth Jazz Festival
Held in Tobago, it is always features a line-up that attracts Jazz, Soul Music and Reggae lovers. Past headliners have included Diana Ross and Whitney Houston.

May – TASTE T&T
Held at the Hasely Crawford stadium, it is the most delicious weekend on Trinidad and Tobago’s calendar. This culinary event in the island brings together some of the country’s top chefs to whip up gourmet fusion cuisine, using indigenous ingredients to create mouth-watering dishes at fantastically attractive festival prices.

July – Tobago Heritage Festival
The Tobago Heritage Festival is aptly described as the cultural showpiece of the Caribbean. For two weeks beginning mid-July each year, Tobago comes alive with a profusion of colorful costumes, rhythms, songs, and dances as natives celebrate traditional festivals. A predominantly African heritage stamps its signature on the culture of the people, during these events at villages and community centers across the island. Each village presents an aspect of the island’s heritage and shows off its versatility in song, dance, drama, cooking and costuming. Events encompass activities such as the Ole Time Tobago Wedding, Junior Heritage Pageant, Goat and Crab Races, Ole Time Carnival – J’ouvert, Saraka Feast, Rites-of-Passage, Folk Tales & Superstitions, Sea Festival, Village Day, Calypso Monarch Competition, and much more.

August – Emancipation Day
This public holiday marks the abolishment of slavery throughout the English speaking Caribbean in 1839. Since 1985, natives celebrate this day every august with a strong emphasis on African-oriented cultural events. In addition, the Great Race, a power boat race from Trinidad to Tobago takes place during this weekend.

August – Independence Day
On August 31st, both islands celebrate their independence from Britain in 1962. The entire country comes together for this event and enjoys a variety of festivities including a military parade, a steel band parade, national awards, a calypso competition and much, much more.

August – Santa Rosa Festival
Celebrates the cross-cultural relationship between the Amerindians and Christianity. About 300 descendants of the Carib Amerindians who settled the Caribbean long before Columbus arrived, form a community near Arima carefully protecting their cultural traditions. The festival features a procession headed by the Carib Queen, a lunch with traditional Amerindian food and a display of arts and crafts.

November 5 – Divali
Known as the “Festival of Lights,” this is one of the major holidays celebrated by the Hindu community worldwide. The festival commemorates the return of Lord Rama back to his kingdom after fourteen years of exile as well as light over darkness. In honor of the goddess of light and the return of Lord Rama, the Hindu’s light deyas (clay pots filled with oil) and string a breathtaking amount of tiny lights through trees, homes and buildings. Music, dance, greetings, gifts, fireworks and sparklers also mark the festival. 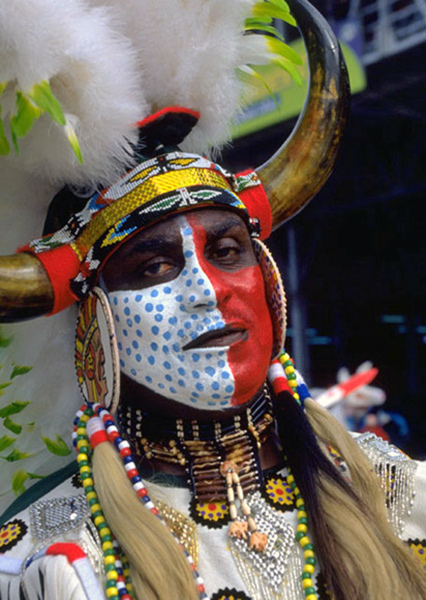 November – Pan Jazz Festival
This festival brings two great musical traditions closer together: Jazz and Pan, the music of Trinidad and Tobago’s steel pans. Many of the country’s well-renowned pannists and great Jazz players participate in this event.