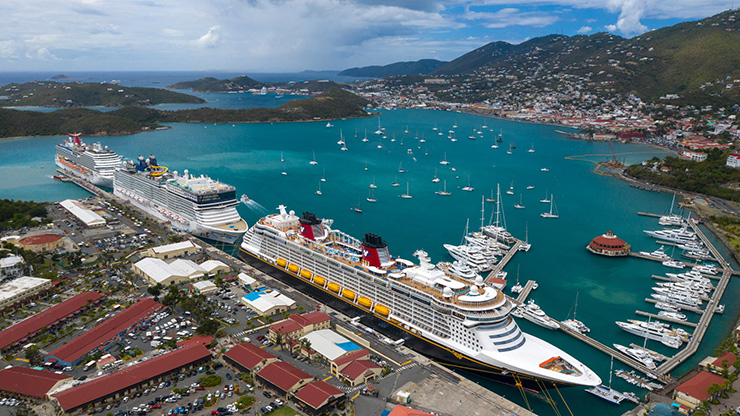 Towns and districts in St. Thomas are interconnected by a loose system of roadways. GPS navigation is necessary for most first time visitors. St. Thomas requires motored transportation to explore the island or a dedicated cyclist looking for challenges. A few shops that rent scooters and motorcycles on the island.

Car Rental service is provided from STT Airport, Charlotte Amalie and some hotels by these companies:

Consider at least one short ride on public mini-bus to mingle with the locals. Country Buses travel between downtown Charlotte Amalie and Red Hook every hour. The first bus from STT Airport to town is at 6am and the last is 8pm. Country Bus Fare $1 and City Bus $0.75. Note however, The public bus system is not recommended for people on a tight schedule.

Dollar Rides are taxi drivers of safari buses outfitted with bench seating in the back. It is open air, but covered. The dollar rides do not have signs identifying them as such, but generally run the same route as the public bus. Ask the driver where they are heading before boarding. Some drivers charge non-residents regular taxi rates. More options to tour the island include:

Get a bird’s eye view of St. Thomas, Water Island and St. John by helicopter for awe inspiring beauty from above. Fly over Magens Bay, Charlotte Amalie and the lush West End of the island. Though aerial tours are a fantastic way, check one helicopter companies cancellation to time-shifting policy, in case of rain or high winds.

The large roster of Royal Caribbean, Celebrity, Carnival, Holland America, Norwegian, Disney, Cunard, Windstar, MSC, Silversea and Princess cruise lines make St. Thomas a popular cruise destination. Depending on your cruise line and time of year, your ship will dock at Havensight Pier, the primary dock for cruise ships, or dock at Crown Bay. Each terminal is a short taxi ride to downtown Charlotte Amalie. The Havensight Pier can host 3 docked ships at a time. If more than six ships call on St. Thomas in one day, late arriving ships could be anchored in the harbor. Tenders would then take you to downtown Charlotte Amalie. Around Havensight Pier, you’ll see dozens of shops, ranging from to cheap to upscale boutiques. Within the expansive Havensight Mall, you’ll find a post office, ATMs and a pharmacy. Yacht Haven Grande Marina is within walking distance of the Havensight Pier. Avis (340-777-8888) and Budget (340-776-5774) rental offices are nearby as well.