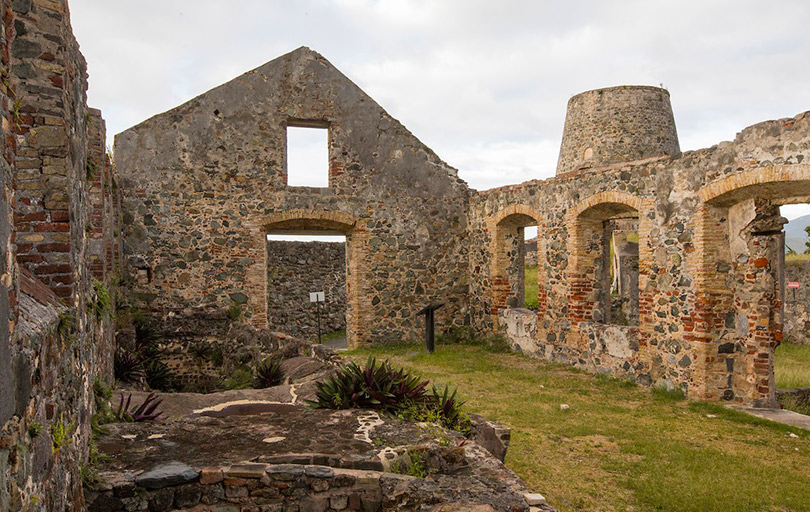 Siboney Indians, the first inhabitants islands in this chain, arrived here around 710 BC. Then the Arawak Indians arrived from what is now Venezuela, around 300 AD. The Arawaks lived peacefully here, fishing and farming, until the cannibalistic warrior Carib Indians moved into the area about 1390 AD.

Christopher Columbus spotted the Virgin Islands on his second voyage to the Caribbean in 1493 around the feast of St. Ursula, he named them “Once Mil Virgins” after the eleven thousand virgins that were martyred with St. Ursula. For his explorations, the Spanish crown granted him the titles of admiral of the Ocean Sea, Governor and Viceroy of the Indies, which effectively gave him control over trade in the West Indies.

In 1585, Sir Francis Drake reurned as a privateer in search of Spanish ships to loot for gold. Legend has it that he organized his privateers in Coral Bay, St. John.

Settled in the late 1600s by agents of the Danish West India Company, the Danish estates on St. Thomas and St. John were planted with slave-intensive crops of sugar cane, tobacco, and cotton, though not to the scale seen in Spanish controlled Hispanola.

Slavery proliferated in the (U.S. & British) Virgin Islands to outnumber Europeans by as much as 5 to 1. Fearing slave rebellion, the Danes instituted a slave code to torture disobedient or rebellious slaves. Nevertheless, In September of 1733, slaves on St. John rebelled and took control of the island for six months until French troops arrived from Martinique to put down the rebellion. Rather than being captured and tortured to death, as many as 300 freedom-fighting rebels jumped to their deaths from the cliffs of Ram’s Head.

Though later than some Caribbean Islands, slavery was abolished in the Danish West Indies in July 3, 1848.

In 1917 the United States, seeking to consolidate its power in the region with a naval base here, bought the Virgin Islands from Denmark. Residents were granted U.S. citizenship in 1927, but the islands remained under control of the U.S. government until 1968, when Virgin Islanders elected their own Governor.