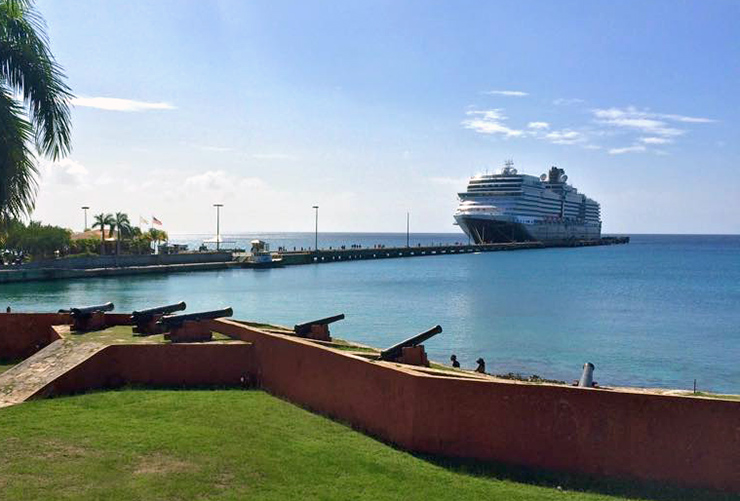 Fort Fredrik looking out to the cruise pier in St. Croix

Henry E. Rohlsen International Airport (STX) accommodates direct flights from North America and Europe. The airport is named after Henry E. Rohlsen, a St. Croix native who served as a Tuskegee Airman during World War II. Rohlsen also served as chairman and president of the National Airlines of Ecuador.

There are direct flights from New York, Newark, Boston, Miami, Fort Lauderdale, San Juan, Chicago-O’Hare, Washington-Dulles to STX Airport. Non-stop flights are provided by American, Delta, JetBlue, Spirit, and United from mainland U.S. and by Liat, Cape Air and Seaborne Airlines from several Caribbean islands. Until the airport is expanded in the early 2020s, STX only includes a few passenger amenities:

Local transportation is also available via mini-bus or taxis. Fares are available from the airport dispatchers. Taxi fares for 1-2 persons range from $6 to $48, depending on distance traveled. Pay roughly half more to add a 3rd passenger.

Aside from being a great way to tour the island, taxis offer insight to the island’s culture. The comfortable vans are each uniquely decorated and themed to express the driver’s personality. Drivers are generally well versed to inform vacationers, including tips on local restaurants and sights. As you would expect, taxis depots are located at STX Airport and Frederiksted Cruiseport.

Though the island has two deepwater ports, Frederiksted is the sole cruise port for St. Croix. Royal Caribbean, Celebrity, Norwegian and Carnival cruise lines have a St. Croix port-of-call on some Eastern Caribbean and Southern Caribbean routes. Most cruises to the island leave from Fort Lauderdale, Miami, San Juan and Baltimore. Check with the cruise line to be certain. Passengers disembark at the Frederiksted Pier to explore the town, enjoy the beaches, rent a car, or catch a waiting taxi. Taxi drivers always know when the ships arrive.