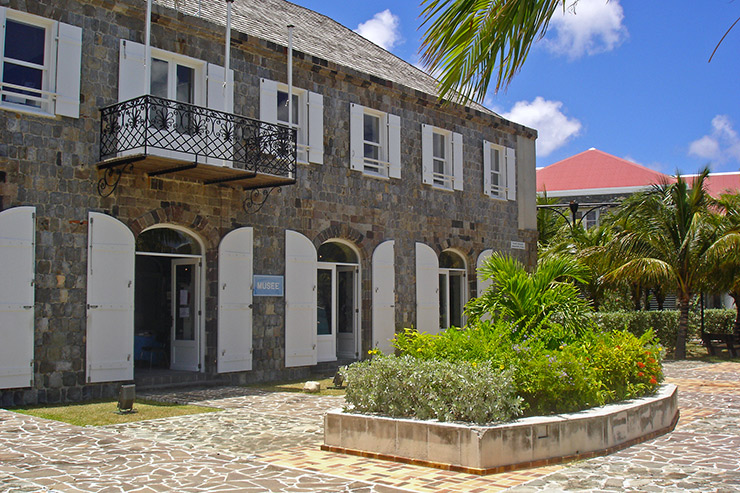 You can’t help but feel like St. Barths is a reward for French officers who served their country distinction, whether for vacation or retirement. The touch of fine French culture is everywhere. That touch is only matched magnificent marigolds and other exotic flowers are difficult to name, but always a treat to the eyes and a blessing to the soul.

St. Barths Museum
Located on Gustavia Harbor, the museum is in a restored historic grey stone building dating back to the Swedish period (1785-1878) and displays artifacts and pictorial documents from St. Barth’s past. Entry is free. The curator is happy to show historic photos of Gustavia’s history. But, only two rooms display art works.

French and Swedish Architecture
Though the island is largely French in cuisine, culture, architecture and language, St. Barths is the only Caribbean island that was under Swedish rule at one time in history. As a result, Swedish Colonial architecture and symbols on the St Barths coat of arms remain in various places in the two largest towns.

Local Craft Shops
You can find handicrafts and braids made from palm fronds, crafted by indigenous people are popular in the shops of Gustavia and St. Jean.

Yachting
St Barths is a top yachting by combining Atlantic Ocean and Caribbean Sea races and nautical events. For sailors and lovers of the sea in general, the annual regattas are plenty, to name a few: New Year’s Eve Regatta, St Barth Cata Cup Regatta (mid-November), Tour of St Barth (May 1), and the Fete du Quartier de Public (August 15) are just some of the nautical events the island hosts annually.