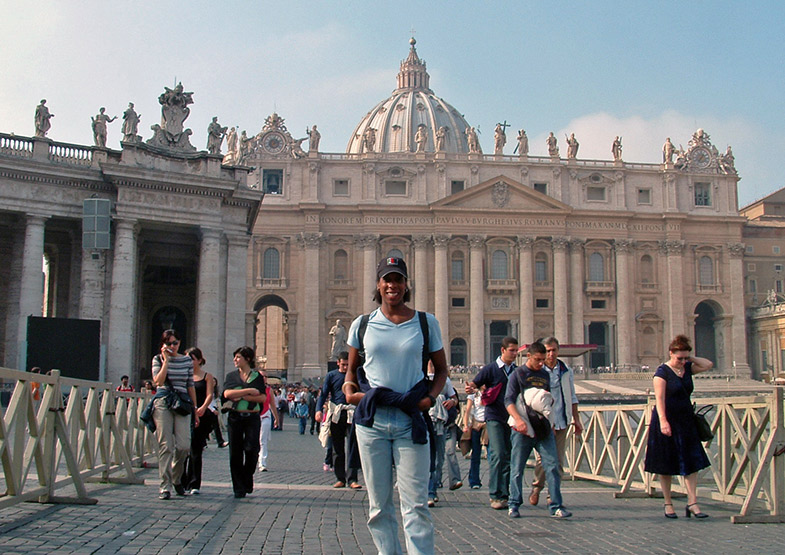 When I was given the assignment to investigate the presence and influence of people of African descent in the Soul of Rome, I immediately began looking for the “obvious” – communities, restaurants, shops, historic sites and the like. And while I did find many of these entities scattered about, and although they are not overwhelmingly apparent to all as in the states and the Caribbean islands, there is much more to the “story” of what influence these African descendents had over the course of history.

As an overwhelmingly Catholic country, the history of most any city in Italy is undeniably joined with the Catholic faith. It was by looking more in depth here, that I learned about many “true forefathers and foremothers” who paved the way for literally thousands of generations of people of African descent to follow.

Saint Moses the Black, born about 330 AD, was chosen for priesthood by the Catholic Church. Born in Northern Africa (present day Algeria) in 354 AD, Saint Augustine is recognized by some as a saint who “lived an austere life, performing great acts of mortification and penance” and that his “psychology and his embryonic theology” still maintain relevance for the Catholic Church today.

In 1578, Saint Benedict the Black, a Sicilian-born African, rose to prominence as the leader of the Franciscan friary in Palermo.

Pope John Paul II issued a decree declaring Haitian-born slave Pierre Toussaint as the United States’ first Black saint in 1996. Saint Peter Claver, Patron of African Americans and slaves, was canonized (found worthy to have your name placed in the canon of saints of the Church) by Pope Leo XIII in 1888, for his spiritual and physical ministerial work in Spain and America.

And in 1897, African born Antonio Vieira was canonized on the 200th anniversary of his death, in recognition of his efforts to “abolish discrimination against Jewish merchants, to abolish slavery, and to alleviate conditions among the poor” in Brazil.

African women held their own within the high ranks of the Catholic church in Italy as well. Saint Monica was also born in the early 300’s in Northern Africa, and is recognized for her persistence and patience in converting and spiritually supporting her family and community through Catholicism.

In 1992, Pope John Paul II beatified Sister Josephine Bakhita, a Sudanese woman who was sold into slavery, transported to Italy in the late 1800s. In her day, she made such an impact on her community and church through Catholic faith, that upon her death in 1947, she lay in state for three days. Several years later she was canonized in Rome as well.

This list of influential Africans within the Catholic church in Italy is endless. Yet these individuals aptly demonstrate that the influence of African descendants, regardless of their ethnic identity, upbringing or religious affiliation, can be found and felt. They have a profound influence in almost every part of the world.