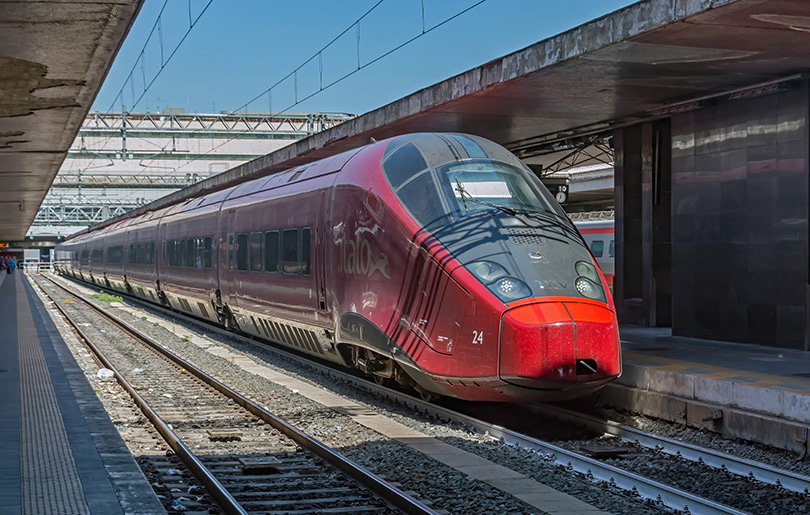 Rome Fiunicino International Airport (FCO) is located about 20 miles outside central Rome. It is the eighth-busiest airport in Europe in 2017. The airport serves as the main hub Italy’s largest airline, Alitalia. The airport appropriately honors the great Italian Leonardo da Vinci, who designed a flying machine with wings centuries before human flight. FCO AIRPORT MAP

• Confirm your flight at least 72 hours in advance.
• If you are not flying directly from America to Rome and need to transfer flights, arrange plenty of time in between. Italian flights are frequently delayed.
• Make 2 copies of your passport/flight/hotel reservations and leave one copy with someone at home, then take the second copy with you.
• Pack headache, motion sickness and other medicines in your carry-on luggage.
• If you have a cold or have problems with air pressure, purchase the special ear plugs available at most airports or pharmacies.
• Bring an eye patch for sleeping.

Leonardo Airport Express train takes 32 minutes to reach Termini Station in the centre of Rome. Passenger terminal direction to the airport train is well signposted. Depending on your terminal, it’s a 5-10-minute walk and trains run of every 15 minutes. It is the fastest and most comfortable transfer to Central Rome.

Don’t take the Leonardo Airport Express to central Rome, if you have many large pieces of luggage. Instead, pay Euros to take a taxi or shuttle from the airport to central Rome. Another large luggage-high comfort option is to hire a private car at 4-5 times the cost of Leonardo Express Train.

The cheapest public transport option between the airport and city centre of Rome is the Terravision Bus, one of four airport bus services to Termini Station. Buses costs a third of the Leonardo Airport Express train, but take twice as long and are less frequent. If you have to save money, take the train.

At the Termini Station, know the end destination of the high speed train you want. Trenitalia Frecciarossa and Italo are competing high speed trains serving Italy. Everything here is easily labeled in Italian, English and other languages, organized, clean, and the Green blazer-clad Trenitalia reps are willing and ready to help.

Rome Termini Station is central to the city, as you see from this map. Termini is the most accessible to attractions because it has two Rome Metro lines, high speed trains, Ferrovia regional trains and a Tram. Rome also has three other popular train stations, Tiburtina, Ostiense and Trastevere that host Trenitalia Ferrovia regional trains and either Metro trains or Trams.

One-way BIT ticket lasts 75 minutes after first validation for unlimited transfers between the Metro Rail, Trams, Ferrovia regional trains, and standard buses. The only transfer that is not allowed is to leave the Metro System and return by the Metro turnstiles. The ticket costs €1.50. BIG Day pass is the best option for visitors. It allows unlimited public transportation from purchase until midnight of the same day. The BIG day travel card costs €6.

Before your plane landing in Rome, write directions on a small sheet of paper that explain how to reach the Ferrovia 5 commuter rail line to Rome Termini Station. To minimize targeting by pickpockets, avoid reading maps or tour books on Metro & Tram trains. Instead, read a Metro-Tram Rail Map and tour books in your hotel room. Memorize saying the name of your Metro & Tram stations near attractions in Italian — its not hard. 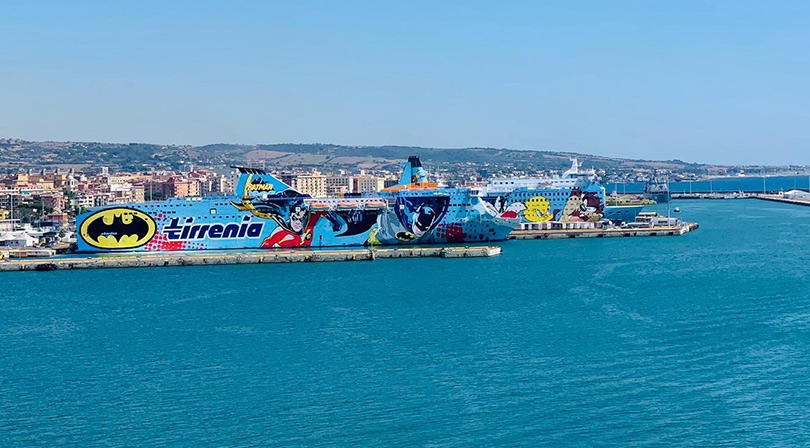 Cruise ships at the port near Rome; (c) Soul Of America

Civitavecchia is the cruiseport for Rome. Its located 45 miles northwest of the city. It is an hour by train from Rome and an hour by car from the airport. Civitavecchia has multiple piers for several cruise ships. A free shuttle service is usually provided between your specific ship and a parking lot outside the port. See http://www.portidiroma.it/en/content/ship-arrivals-and-departures. See this map of the port area and train station.

The shuttle service is available from 5:30am to 11:00pm. Shuttle frequency is every 15 minutes and one of two shuttles is equipped for the transport of disabled passengers. In 2014, the old shuttle stop location moved to Via Turco, adjacent to the Europcar rental office. There is a tourist info booth here. You can walk the 20 minutes)\ to Civitavecchia Train Station or take the Argo shuttle bus for a €2 fare. Shuttle schedule is at http://civitavecchia.portmobility.it/en/civitavecchia-train-station.

Rome Cruise Terminal can also be reached from Civitavecchia Train Station with the local Argo buses. If you are carrying a lot of luggage, this may not be a good idea.

For those leaving from the port to Rome by train, buy the BIRG Ticket (5 zones). For €12, it allows unlimited trips in all public transport, from Civitavecchia Station to Rome from the time of validation until midnight. The BIRG can be purchased at the station.

We do not recommend driving to/from port, unless you know the region well. If you do, park in one of the 3 available car parks and take a free shuttle from there to the port. If you don’t want to ride the train, our advice is to reserve a driver allowed to pickup/drop-off at your cruise ship. You can book a cab at https://www.civitavecchiaport.org/port-main-terminal/Civitavecchia Cruiseport Terminal