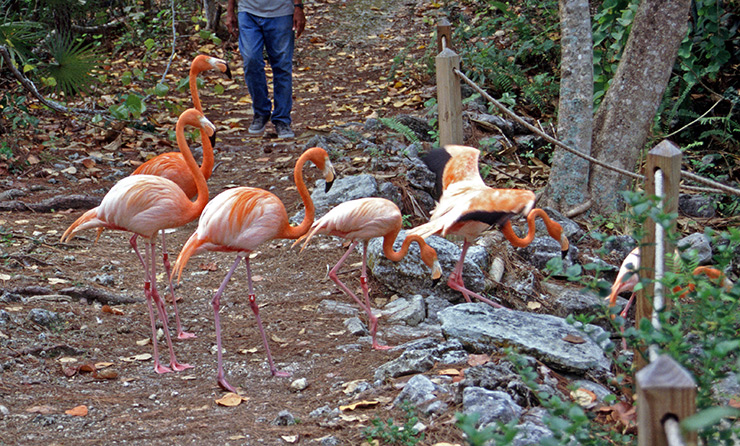 Since its relatively flatland, Grand Bahama Island Eco-Travel invites you to walk and observe flora, fauna and wildlife without working up too much of sweat.

Parrot Jungles’ Garden of The Groves
One of the finest botanical gardens in the Caribbean with more than 10,000 species of flowers, shrubs, trees, much of it exotic. The garden includes waterfalls, cooing native birds and an old-fashioned chapel for weddings. Its an ideal setting for quiet reflection.
LOCATION: Freeport
PHONE: 242-373-1250

Heritage Trail
The island’s main transportation artery was Old Freetown Road, a dirt path leading from Old Freetown in the East to Eight Mile Rock and other settlements in the West. After 1955 the modern roadway was built and the old road was left to nature. Now a stretch of it is one of the island’s nature walks. Take water along for a refreshing, five-mile trek where you can see 18 kinds of birds, 30 species of flora and fauna, 7 species of butterfly. The stout walker can also see The Hermitage remains, the oldest building on Grand Bahama which dates to 1901.
LOCATION: near Freeport

Hydroflora Gardens
Offers visitors a fascinating look at “hydroponics” – practice of growing plants without soil. The tropical and sub-tropical flowers and plants produced on this five-acre compound are as beautiful as their growth process is interesting. Among the unusual exhibits are “Bible” plants and a sunken garden. Guided tours are available Mon-Sat.
LOCATION: Freeport
PHONE: 242-352-6052

Lucayan National Park
Though teal colored water, spotless beaches, and lavish tropical resorts are expected here, you will be pleasantly surprised to see the majestic pine trees which populate Lucayan National Park along with mangroves, ferns, and dozens of rare flowers. The 40-acre park, established in 1982, exemplifies the complex Grand Bahamian environment which is home to one of the world’s longest underwater cave systems. The vast tunnel system, many parts accessible on foot, was created by acidic rainwater wearing into the limestone base. For safety reasons, diving in the caves is only allowed in specified areas by permission from UNEXSO.

Peterson Cay National Park
A mile off the southern shore, Peterson Cay (“Key”) is one of the smallest National Parks in the Bahamas. Its just under 2 acres of protected park area surrounding one-quarter mile of marine environment. Shallow bars and coral reefs west of the cay, make for world class snorkeling and diving with schools of tropical fish, soft corals, and an occasional manta ray. Sparsely vegetated with low scrub, this windswept limestone island is the only cay on Grand Bahama’s leeward shore. Shady areas are scarce and visitors are advised to wear hats, sunscreen and bring drinking water. Sandy white beaches on the north side provides boat access and are excellent for swimming, sunbathing and picnics.
Access to Peterson Cay National Park is boat-only.

Rand Nature Centre
Only 2 miles from downtown Freeport, the 100-acre natural habitat sanctuary and education center features the prized West Indian Marching Flamingos, the national bird of The Bahamas. They are a splendid site marching around the pond in a line. Birdwatchers observe the Bahama Yellowthroat, Red-legged Thrushes, Cuban Peewees Bahama Parrot, Red-tailed Hawk and Turkey Vulture. Relax ladies, there are no poisonous snakes. Instead, one finds an abundance of harmless curly-tailed lizards and camouflaged anole lizards. As you traipse the nature trail, notice 130 named plants. The Whiskbroom Fern is believed to be the first plant in the world to stand upright. Enjoy the abundance of white sage aromatic leaves, wild guava and sea grape berries, wild coffee and mahogany, while Zebra Longwing, Gulf Fritillary, Buckeye and Giant Swallowtail Butterflies dance into view at various points along the trail. In homage to the Lucayan Indians, Rand Nature Centre volunteers recreated a Lucayan Village featuring a chieftan’s house, four huts of thatched palm leaves, and a ceremonial building. Guided tours are available Mon-Sat.
LOCATION: East Settlers Way
PHONE: 242-352-5438