You are here: Home1 / International2 / Geneva 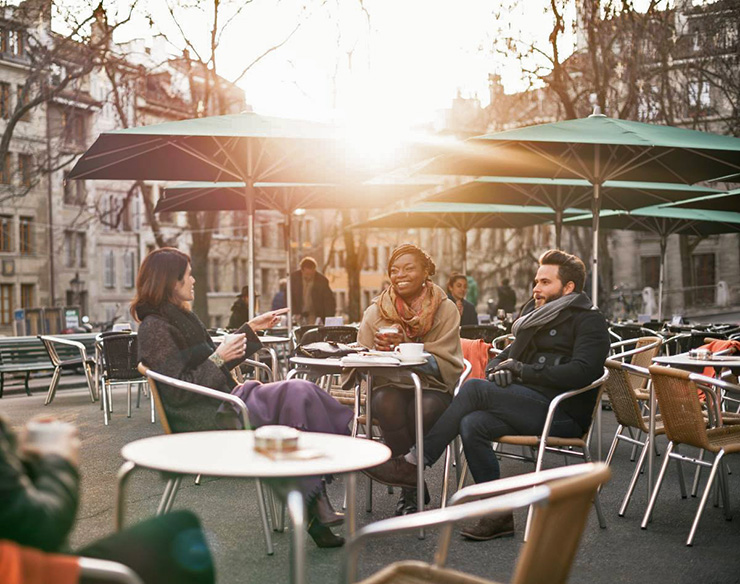 Geneva is one of Switzerland’s most cosmopolitan cities and its second-most populous jurisdiction. By most standards, it is still a small city. With a population of about 200,000, it is about the size of Little Rock, Arkansas. Despite its size, the city is a heavyweight in humanitarian, peacekeeping, and financial issues throughout the world.

That influence is due to its reputation for neutrality, discretion, and efficiency.

Such influence has led to labels such as the “Birthplace of Humanitarian Law”, “Capital of Peace”, “Meeting Place of Nations” and “Watch & Clock Capital of the World.” Given its enormous influence and power, Geneva is not a pompous city. Its residents are refreshingly warm and welcoming.

German is widely spoken in Switzerland. But Geneva is closer to France, so French is its official language. For visitors’ convenience, most tourist and service personnel slip effortlessly between French, English, German, and Italian.

No doubt they get lots of experience mingling with foreigners since approximately 40% of residents are from outside of Switzerland. A huge percentage of these are foreign nationals, representing more than 180 different nationalities moved to the city to work in the offices of the nearly 200 international organizations headquartered there

Situated in the extreme southwestern corner of Switzerland, Geneva is one of the 26 territorial districts in the country. The city, occupied and annexed to France from 1798 to 1813, is surrounded by French territory and shares more than 95% of its border with France. Geneva center city is oriented around Le Rhône, the river that flows through the city, forms Lake Geneva (Lac Léman in French), one of Europe’s largest freshwater lakes, then continues west into France. 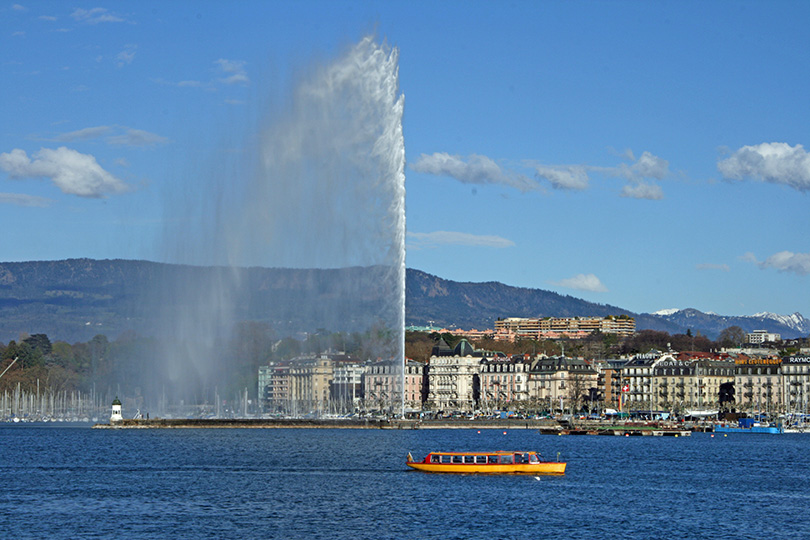 Most major hotels, the main commercial district, and tourist attractions are located near the river either on the Rive Gauche (South or Left Bank) or the Rive Droite (North or Right Bank). Although there are six bridges that link the two banks, Pont du Mont-Blanc and Pont des Berges are the two bridges used by most tourists.

Geneva is a compact city that is easily explored on foot. The city has lots of open green spaces and walkways where visitors can wander through beautiful gardens, stroll along the banks of the river or just sit and enjoy the scenery. That scenery includes not only the clean, clear blue waters of Rade de Geneva or boat harbor but also views of the Alps and the Jura mountains in nearby France.

The first stop for most first-time visitors is the boat harbor to see the Jet d’Eau, the main tourist attraction and the trademark of the city. The hydroelectric safety valve of the famous water jet forces a plume of water 453 feet into the air, nearly as high as the Washington Monument. The plume of water is made white by a special aeration valve. Exactly how the fountain works remains a closely guarded state secret despite much interest by engineers from other cities.

A breakwater, the Jetee des Eaux-Vive, leads from the Left Bank out to the boat basin which is the nearest point for tourists interested in a closer inspection of Europe’s tallest fountain and willing to run the risk of being soaked by the fountain’s spray.

After seeing the Jet d’Eau, visitors usually head up the hill to La Vieille Ville, Geneva’s Old Town on the Left Bank of the lake. To get there from the Right Bank, head south on the Quai de Mont Blanc. Make a quick stop at the Square des Alpes, home of the Brunswick Monument. The monument was built as a memorial to the Duke of Brunswick, a wealthy investor who spent his final three years in Geneva and left huge sums of money to the city, but with one condition.

That condition obligated the city to build “a mausoleum in an eminent and worthy location, executed according to the established concepts by the finest artists of the time, without consideration of cost.” I’m sure the Duke is pleased with the site which looks out onto Lake Geneva and has a view of the surrounding mountains.

After paying respects to the Duke, continue southwest past Pont du Mont-Blanc, a major traffic artery that connects the city’s Right and Left banks, to Pont des Bergues, a pedestrian bridge that also leads to the Left Bank. About midway across the bridge and connected by a footpath is Rousseau Island, a serene respite surrounded by the oftentimes choppy waters of the Rhône. Outdoor seating on the island provides splendid views of both banks of the city and the surrounding mountains.

Planted along both sides of the lake are plane trees, known as sycamore trees in the United States. These bare, knobby kin look nothing like their multi-branched leafy American namesake. Heavily pruned of all new branches in the fall, these trees appear in the winter and early spring as a stark, almost painful contrast to the flowing waters of the Rhône River.

At the end of Pont des Bergues, turn left on Quai du Général-Guisan and walk a short distance east to the attraction that many tourists look for after seeing the Jet d’Eau – the Flower Clock in Jardin Anglais (English Garden).

The clock is situated on a gently sloping green hill at the busy intersection of Quai du Général Guissan and Pont du Mont-Blanc. It is a symbol of the world-renown Geneva watch industry and a masterpiece of technology and floral art. The 6,500 flowers that make up the clock face and other concentric circles change with the season and the working clock keeps perfect time.

Visitors can spend an entire day exploring Geneva’s Old Town with or without a guide. From Google Maps on your smartphone, you can walk to many sites including Maison Tavel, the oldest house in Geneva; Palais de Justice law courts since 1860, Hotel de Ville, site of the 1864 First Assembly of the Geneva Convention; and the Old Arsenal with its 5 cannons and archway with three mosaic frescoes depicting periods in Geneva history. You will pass scores of boutiques and antique shops on the narrow, windy, and sometimes steep streets of Old Town.

Geneva History
There are reasons to call this small city the “Birthplace of Humanitarian Law” and the “Capital of Peace.”

Geneva Travel Tips
German is most widely spoken in Switzerland. But Geneva is closer to France, so French is its official language.