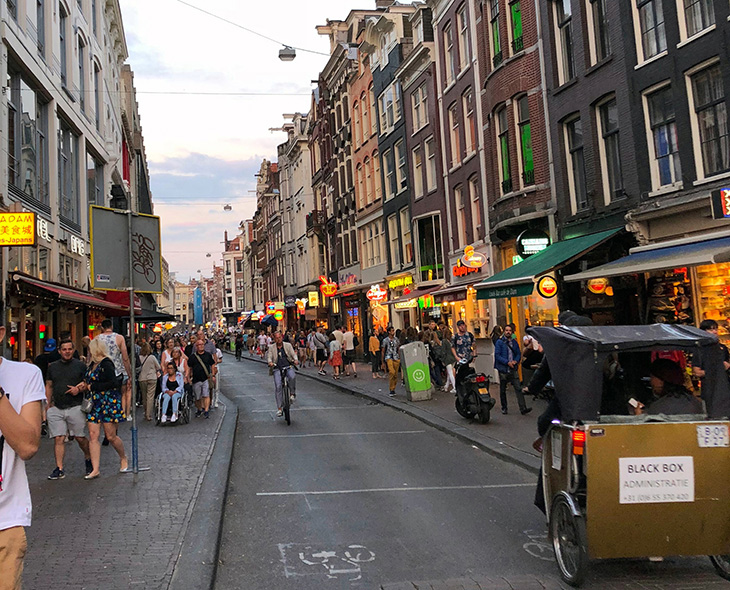 If cold weather is an issue for you, visit Madrid during the spring and summer. If you want to save money and see fewer tourists, visit Amsterdam during the winter and fall.

Though Dutch is proudly the official language and English is widely spoken by many locals.

Hotels have the most expensive rates on phone calls, so purchase a phone card for your international calls, if you don’t have international service on your mobile phone.

Banks are open from 9 am-5 pm Monday-Friday. ATMs are plentiful and the most convenient way to get Euros.

If you love art, purchasing a museum pass is highly recommended.

Electricity is different than in the U.S., so bring or purchase an adapter to re-charge your digital equipment.

The laws regarding liquor, drugs, and prostitution are different in the U.S., so be prepared for a unique atmosphere.

Pre-COVID, Amsterdam received 5.4 million tourists/year, with about 14% from America.

Thanks to its numerous monuments, museums, sightseeings, landmarks, and attractions, Amsterdam was declared World Heritage Site by UNESCO. It consists of these distinctly Dutch districts:

Compared to major U.S. cities, Amsterdam is a safe city. But use common sense when walking around. Sisters traveling alone should assume they are traveling in a major U.S. city and take the necessary precautions.

Don’t expect local Sisters and Brothers to greet you the same way that they do in the U.S. The U.S. custom of a head nod or “Hello” may not be familiar to them.

If time permits, take a picture of your debit card before leaving the country.

The ATMs only accept PIN numbers with 4 digits, so check with your bank before going. Use the ATM card to purchase Euros, since they usually have a better rate than many currency exchange offices.

Locals don’t wear money belts. If you choose to wear a money belt, you stand out as a tourist. It is preferable to get one that you can wear inside a shirt or blouse. Otherwise, place money in hidden pockets or deep inside your bag, so that it’s hard for pickpockets.

When walking around or using the Metro, carry little cash, a debit card, a copy of your passport for identification. It’s easier to replace those items.