You are here: Home1 / Events2 / Motown The Musical – National Tour 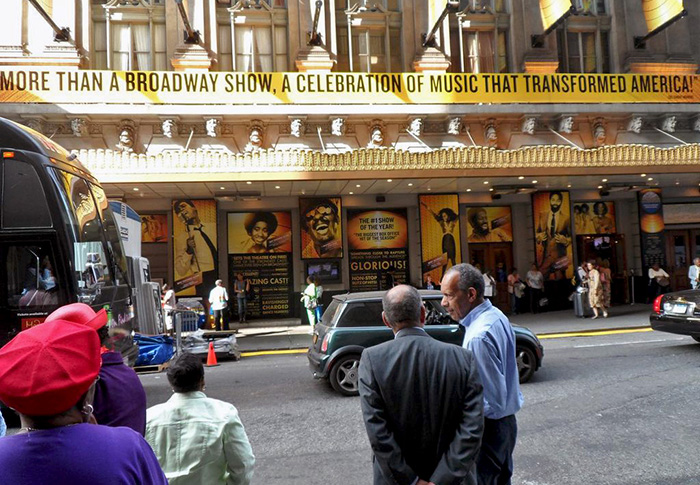 Motown The Musical is an adaptation of Berry Gordy’s book To Be Loved: The Music, the Magic, the Memories of Motown. Playing at the Lunte-Fontanne Theatre, it is one of the hottest tickets on Broadway. Though appropriate to age 8, the show will most resonate with 50 to 75 year olds who were entering their prime along with Motown.

The musical begins with a wry, openly bitter Berry Gordy at home in the Hollywood Hills, threatening not to attend the Motown 25th Anniversary TV Special broadcasting live across town. From there the lights go down and the stage opens a portal to modest home in 1950’s industrial Detroit. Further flashbacks show Gordy listening to a boxing match on the radio with his father, Pop Gordy. Young Gordy vows to be the next Joe Lewis. With that inspirational root and a bridge from boxing to music, Barry Gordy creates the voice of a generation that breaks racial barriers, redefines social mores and touches America’s soul.

From the idea of a music company at his mother’s kitchen table, to the highs and lows of MOTOWN, the music label, icon and family, the show is unafraid to touch uncomfortable subjects. Gordy painfully discloses his love affair with Diana Ross that produced arguments, chaos and love children. He explains Motown’s move to Los Angeles and sale to Universal that were disparaged by many. Gordy portrays dissent over royalties and pays long overdue tribute to the three great songwriters in Motown’s stable: Holland-Dozier-Holland.

Anyone who knows Motown concerts, knows that wardrobes were a big part of the act. There are no wardrobe malfunctions here. The wardrobes are exquisite, with the Supremes and Temptations outfits being exemplar.

Like their real life counterparts, the actors portraying Smokey Robinson/Charl Brown, Marvin Gaye/Bryan Terrell Clark, Diana Ross/Valisia LeKae and little Michael Jackson/Raymond Luke Jr., have the most difficult task, given the astute audience critiques each singer and song based on the strength of “I was there for the original performance.” They are are on point. With bottled up patience, the audience, mostly African-American out-of-towners, had enough theatre presence to allow these soloists to shine without an utterance. But when beckoned for audience participation, soul claps and shout outs erupted in call & response fashion. Like church.

Berry Gordy is first and foremost a businessman, then showman. His direct writing style hits you over the head with its purpose. This should not be unexpected, as the songs, choreography and sets are the headliners, not the dialogue. Occasionally, vocalists descend to the level of a reality show competition – until the director reels them back in with 1960s Civil Rights Era sets flash forwarding through to 1980’s sets. The decades of 50+ songs burn off as easily as the costumes and wooden sets evolve into color TV, faster cars and computer displays that frame each passing year. 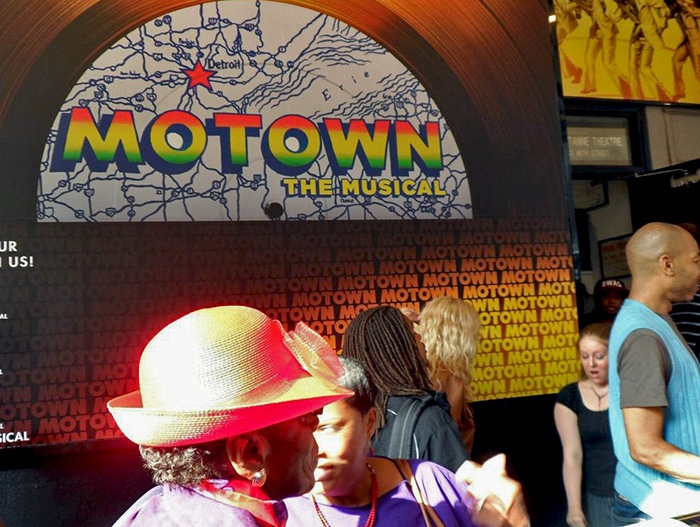 Though Motown The Musical has literary shortcomings, it excels in describing how Berry Gordy was driven to productize “our” music into an iconic cultural crossover brand. A historical anchor of the production is how Motown became a force of integration between Black and White America, summed up in one scene referred to as “The Birmingham Thing” divided by police lines, with Blacks on one side and Whites on the other with the music ultimately, joining them together. We see a bit more precious tidbits when the business mind of Gordy takes extraordinary measures to kickstart Diana Ross’ solo career. Other scenes reveal layers of personal relationships behind the Motown identity.

Smokey Robinson was a cut buddy/brother-in-arms from day one. Mary Wells sits amiably as a staple of the Motown family. Susanne Depasse acts as the secretary, music scout, road manager, babysitter and confidant that she was. The Diana Ross and Susanne Depasse backstory and competing relationships with Gordy is tinged with intrigue.

Gordy in life and the play, struggled with the competing interests of commerce, art and activism. Marvin Gaye’s portrayal is of special note. When the Vietnam War erupts, Gaye insists that his music have a political message and strongly conveys the need for civic mindedness and activism to all Motown singers. Gordy, not wanting to rock the crossover boat (more $$$), interprets Gaye’s plea as a risky business move. As we know, Marvin eventually won that battle with the greatest Soul-Message album in music history, What’s Going On. Another example is The Supremes performing Stop In The Name of Love on The Ed Sullivan Show. Its artistically strong, but doesn’t go far enough reminding younger audiences of the racial barriers it broke on national TV.

But the audience remembered, as whispers of “There were Colored People on TV” and “Didn’t they look fine” reverberated through the crowd. Maybe that was the intent all along.

The show ends as it began, continuing the re-enactment of whether Gordy will be a no show for the TV Special. The grand finale, as in real life, is the Motown 25th Anniversary TV Special in 1983, which reunites Gordy with his then protégés, now mega stars and Michael Jackson’s show-stopping moonwalk. In that vein, Motown The Musical is a combination docudrama, historical retrospective, and good old fashioned soap opera at one communion table. Though only 80% perfection, it is 100% amazingly good music from the Baby Boomer generation who delivered America’s soundtrack of historic rebellion and social growth.

Success recreating this nostalgia is having the Berry Gordy business effect. The repeated comment I heard was “this is a show I would see again, 2 or 3 times.”