Global Economic Competitors are building their version of Interstate High Speed Rail and Rapid Transit systems faster than America. They do so because it yields massive economic and other benefits today and for generations unborn. America delays HSR and Rapid Transit construction at its competitive peril.

People traveling within regions power their economies as much as freight movements. When passenger travel is delayed due to traffic congestion, it taxes their economy. Transportation efficiency matters in today’s competitive global economy. Millions of jobs are at stake.

By comparison, in 2022 America will only have 1000 miles of 125-160 mph HSR and 90-110 mph Regional Rail. Only 4 metro areas are expanding Metro Heavy Rail lines. Though 35 American metro areas are building Metro Light Rail or Trams, few have enough over/underpasses for time savings and high frequency to attract high ridership.

We should not be surprised that in 2019, INRIX analysts reported that roadway congestion cost the average American $1348 per year — far more than our Global Economic Competitors in Western Europe and Eastern Asia.

America’s Global Economic Competitors have an abundance of HSR and Regional Rail for these massive Transportation benefits:

1. Faster, High-Capacity & Space-Efficient Alternative to Highways: One HSR route can transport the equivalent of 20-60,000 daily solo drivers on a 3-lane Freeway.

3. Alternative to Regional Flights: HSR converts most regional flyers in the same corridor to riders.

Another of HSR’s compelling benefits is the Space-Efficient Passenger Capacity advantage over Highway & Airport modes, as illustrated below.

China opened its first 67 miles of 186 mph HSR service to connect venues for the 2008 Beijing Summer Olympics. By 2021, China leaped to a staggering 24,000 miles of 124-217 mph HSR transporting over 1 billion passengers/year. That nation continues investing $46 billion/year in HSR, with the goal of 43,000 HSR miles by 2035. By then, China plans to anchor a Trans-Asia HSR Network spreading to India, Southeast Asia, North Korea, Russia and Turkey. 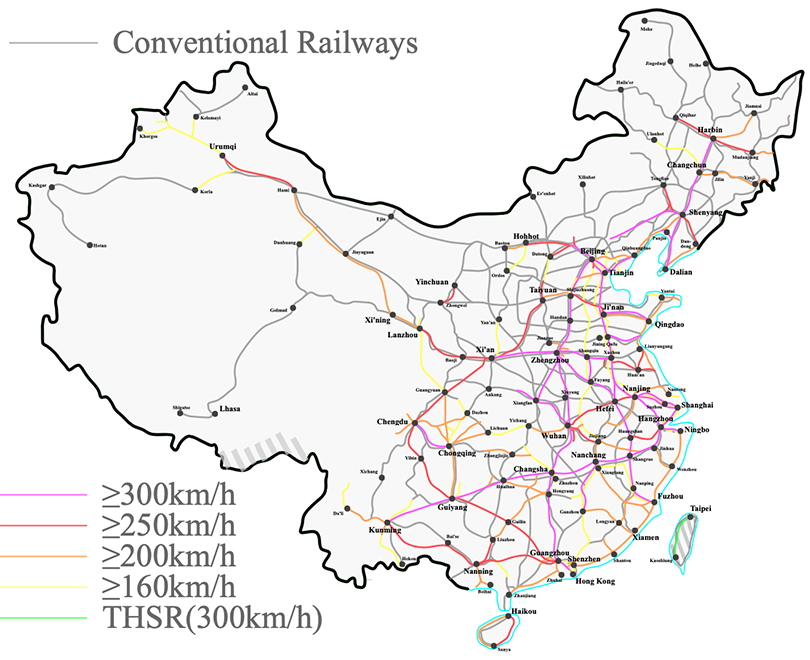 From 1964 to 2021, the Shinkansen HSR system in Japan has grown to 1718 miles operating at 162-199 mph top speeds. Since opening day, it has transported over 10 billion passengers through earthquake and typhoon country with zero passenger fatalities. An angel’s abundance of Regional Rail, Metro Heavy Rail, and Trams transfer riders to Shinkansen train stations. In 2024, Japan will introduce the ALFA-X train that better adapts to weather extremes and earthquakes,. It will likely operate at 217 mph top speed on the straightest routes while consuming similar energy as today’s trains running at 199 mph. Japan is on pace to complete the Shinkansen HSR system around 2033, then focus on completing its 311 mph MagLev line between Tokyo and Osaka by 2037. 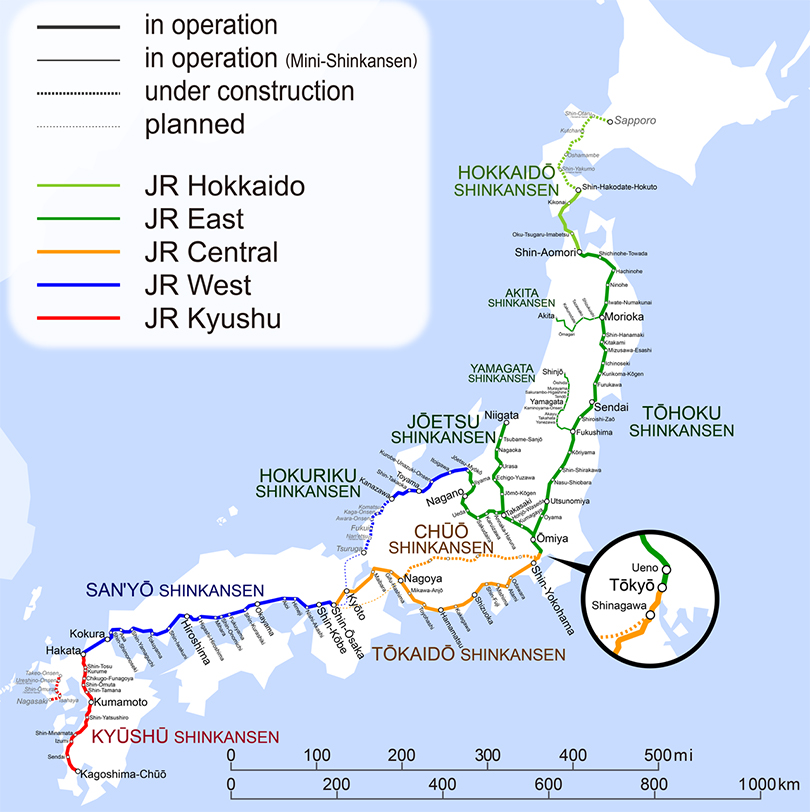 America visitors are amazed by the transportation lifestyles in Europe, where residents have higher usage of HSR, Rapid Transit, public buses and bikes. In Europe, HSR is apex infrastrcuture for Ground Transportation.

Switzerland. In 2020, this small mountain nation opened three lengthy 124-155 mph HSR tunnels through the Alps to shrink 4-6 hour train rides down to 2-3 hours. It now has HSR connections to France, Italy, and Germany. By 2035, Switzerland will have over a thousand HSR, Regional Rail, and Tram miles.

United Kingdom: In 2020, the UK has a 186 mph Eurostar route to Paris and Brussels and a 143 mph HSR route within the UK. Nearly half of its legacy rail has upgraded to 124 mph HSR or 100 mph Regional Rail. London, Liverpool, Newcastle, and Glasgow have Metro Heavy Rail systems, while other UK cities are expanding Tram systems. In 2028, the London-Birmingham HSR route opens. In 2033, the London-Manchester HSR route opens. The newest HSR lines will likely operate commercially at 217 mph, like in Japan, France, and Spain. UK is creating well over 1000 miles of 137-217 mph HSR. Portugal, Denmark, Sweden, Finland, Greece, Ireland, Poland, Czech Republic, and Turkey have several HSR lines in operation and many more projects under construction. By 2035, Europe will have 25,000 HSR miles and well over 25,000 Regional Rail miles connecting its metro areas. The continent will have over 2,000 Metro Heavy Rail miles and all metro areas with over 100,000 population will have Light Rail or Tram systems. Passenger Rail in Europe will be as ubiquitous as Highways in America.

The fall-out of the Russia-Ukraine War demonstrates that Europe can be cut off from its main Natural Gas supplier. As a result, the EU will accelerate the conversion from coal to wind, solar, hydroelectric, geothermal, and nuclear power plants, rather than to natural gas power plants. That bodes well for the EU’s 2035 and 2040 green energy and green transportation goals.