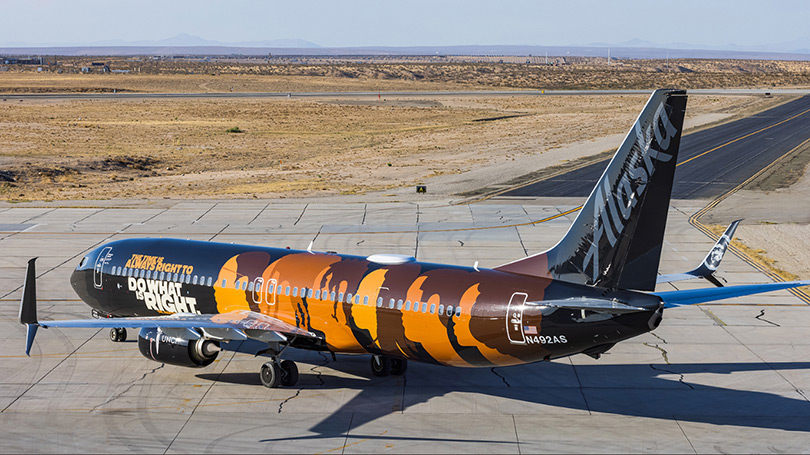 Alaska Airline Commits to UNCF and Racial Equality,
Sealing the Deal with an Airplane

Maya Angela once said, “People will forget what you said, people will forget what you did, but they will never forget how you made them feel.” I won’t remember everything Alaska Airlines executives said recently, but I will always remember how they made me feel. Those words never rang more true than when I attended the ceremonial launch of Alaska Airlines’ United Negro College Fund (UNCF) airplane.

Alaska Airlines has been a long-time supporter of education as a critical pathway to racial equity through initiatives, such as its 15-year partnership with the UNCF. That partnership includes:

The air miles are critical to students who can’t afford to fly to college tours, back and forth to their HBCU, and to other UNCF programs. Alaska senior management asked its Black Employee Network how to best support UNCF, promote UNCF’s educational programs and demonstrate that black travelers should feel a sense of equity and belonging with their airline.

Alaska Airlines loves celebrating its values and partnerships on airplane murals. So, Alaska’s Black Employee Network worked with UNCF on an airplane that became their canvas. They planned to unveil a new aircraft with a message that highlights education, equity, belonging, and UNCF. 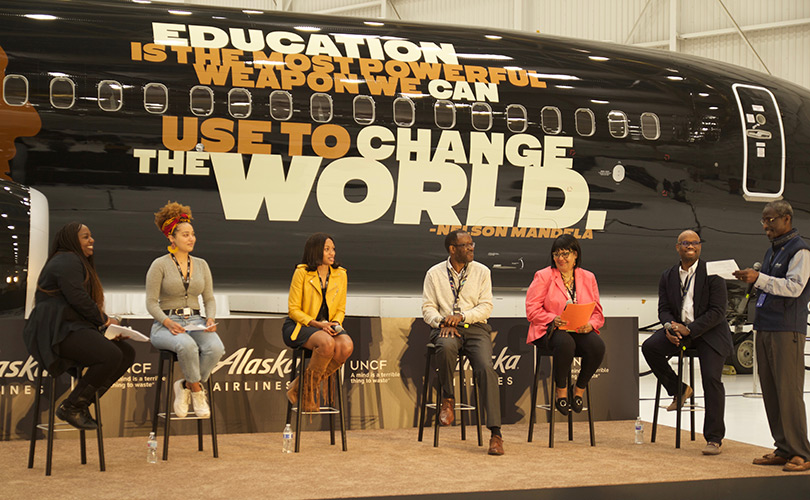 Members of the general media and black travel media were invited. Once I got my second COVID vaccine, I jumped at the opportunity to attend the airplane reveal on April 26, 2021. After a swift check-in exercise, we were shuttled to the Alaska Airlines hangar in Seattle-Tacoma Airport. All adults that I met got their COVID vaccines as well. Despite the state mask mandate, the hangar vibe was welcoming.

As I approached the aircraft, the silhouettes of kids on the aircraft revealed an inviting patchwork of details. Teens who modeled for the imagery were children of black employees at Alaska. The kids and their families, beaming with pride that was both real and deep.

At the ceremonial reveal, one side of the plane read “The Time Is Always Right to Do What is Right” by Dr. Martin Luther King, Jr., and the other side read “Education is the Most Powerful Weapon We Can Use to Change the World” by Nelson Mandela. The aircraft is fittingly named “Our Commitment.”

We had open access to pilots, flight attendants, ground crew, management, and administrative staff. I can’t recall meeting so many happy employees at a large company. The casual talks with the trailblazing black pilots of Alaska, male and female, were enchanting. When the plane left its hangar, the smiles and handshakes of contentment matched the moment. Some cried. 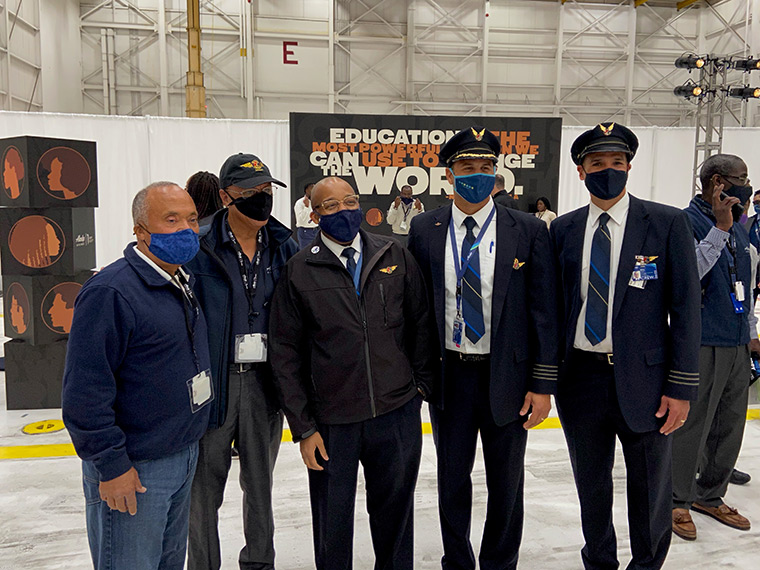 Alaska Airline’s black pilots, the oldest started in the 1980s

The black pilots and staff invited us to board. The cheerful kids joined us. Like the first day at work, we couldn’t wait to take photos beside the airplane and the ceremonial flight. It circled only 10,000 feet above Seattle metro area with unforgettable views of Mount Rainer. On this mobile lovefest, we cheered taking off, in-flight, and landing. Consider yourself fortunate to see this airplane. Consider yourself more fortunate to fly it.

After the remarkable event, I glommed my way into a ride with a few Alaska Airlines employees and visited their corporate headquarters for a minute. There, I saw Maya Angelou’s famous statement on a wall, along with employee photos and a giant artwork called Together.

At that moment, I felt fully connected to Alaska. This is clearly an airline, a large company, a corporate partner that gets it.

I don’t know Alaska Airlines’ stats for hiring black and brown employees, but I venture to guess that it’s going up Post-COVID. When they expand to more domestic and international destinations, Alaska should give Southwest, Delta, United, and American a bigger run for the money. They will certainly get more of my money.