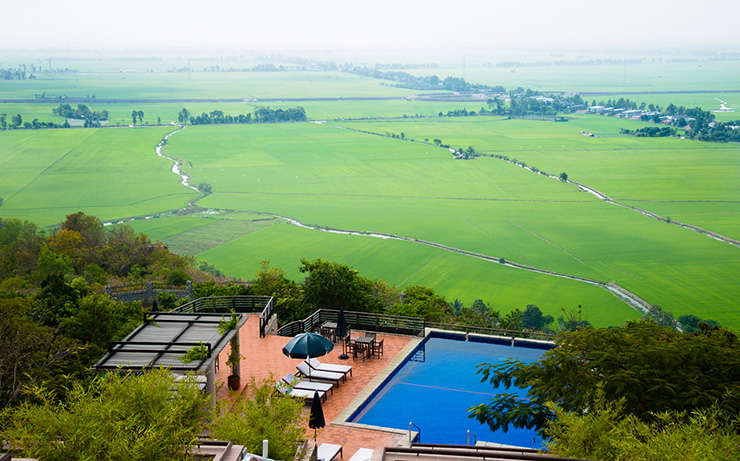 My boyfriend, Patrick, and I spent a few days touring busy, bustling Saigon and a week exercising our way around Phu Quoc, or what I like to call the Hawaii of Vietnam. While there, we swam, snorkeled, kayaked, cycled and ran. We were exhausted by the time we reached Chau Doc, a city bordering Cambodia on the banks of the Bassac River in the Mekong Delta. – Jeanette Valentine, Soul Of America

In this lazy river town, we were fortunate enough to stay at two properties belonging to Victoria Hotels and Resorts. Unwinding at the Victoria Hotel Chau Doc and the Victoria Nui Sam Lodge was the perfect way to end our Vietnam journey. Here’s what we found:

First Impressions: The afternoon heat melted away as I stepped into the entrance of the Victoria Hotel Chau Doc. Cool air circulated, and stewards offered ice-cold hand towels and even icier mango smoothies. But before I could wipe my brow or take a sip, a glimpse of the Bassac River pulled me across the lobby and through the French doors. My breathing stilled. My heartbeats slowed. And for the first time during a fun-filled but hectic, hyper-energetic Vietnam adventure, I relaxed.

The River View: The waterway that flows past the rear veranda is just as much a part of the Victoria Hotel Chau Doc’s charm as the property itself. The hotel sits where the Bassac River forks into two tributaries that snake northward to Cambodia. From the veranda, I felt like I was watching an IMAX film. The 180-degree panorama of water, its banks lined with jungles the color of emeralds and villages of homes perched on stilts, filled my vision. It was a liquid landscape brimming with aquatic life. 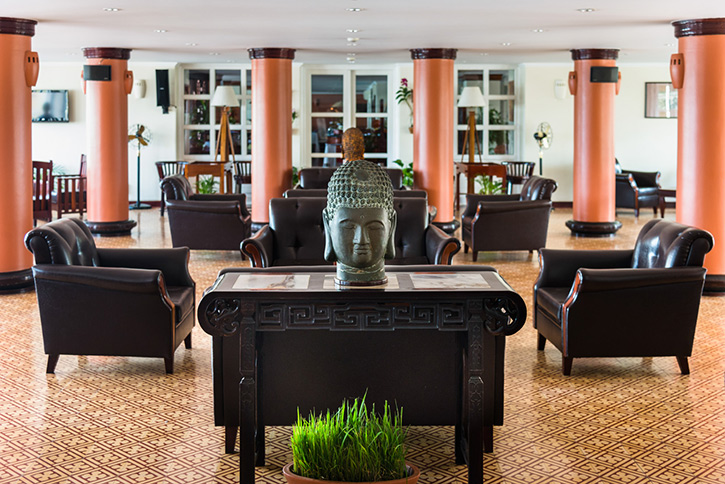 The Property: The Victoria Hotel Chau Doc looks and feels like a French colonial mansion: a daffodil-yellow facade, stark white balconies of elaborate spindles, accents of gleaming dark wood, staff whose smiles promise to anticipate and fulfill all your needs. (And they do.) And though the Bassac River is a lure and signing up for a boat tour to experience local culture is a “must-do,” you may not want to leave the hotel.

The Rooms: Miniature black and white tiles paved the hallway floor, leading to rooms that could serve as set design for a 1930s Hollywood film noir. Art Deco designed furniture – headboard, dresser, chairs and conversation table – anchored our room, which included a balcony overlooking that view. A beautiful hand-woven cloth lay across the bed, an example of craft work from the Cham people, who live along the river. The flat-screen television almost seemed incongruent in such a charmingly nostalgic scene. An added surprise were daily scrolls sharing local customs and lore.

The Lounge: Sinking into the chocolate-colored leather sofas and club chairs of the lounge was a great way to end a day of sight-seeing. Large, wide columns gave the space a stateliness, as did the well-stocked Tan Chau Salon Bar, its sturdy wooden veneer polished to a sheen. Bright sunlight flooded in from floor-to-ceiling windows overlooking the river. In a nod to the clubby nature of the decor, a billiards’ table awaited guests itching to sink a bank shot before indulging in an afternoon iced coffee.

The Veranda: White-clothed bistro tables and chairs dotted the rear veranda, like transplants from an outdoor Parisian cafe. You can sit to take in the river life during the day or the sparkle of lights from distant villages at night. The air was humid, and mosquitoes buzzed about. But the hotel provided bug spray and lit Citronella candles to keep the pests at bay. Below the veranda is a swimming pool, tiny white tiles again evoking the Art Deco era. 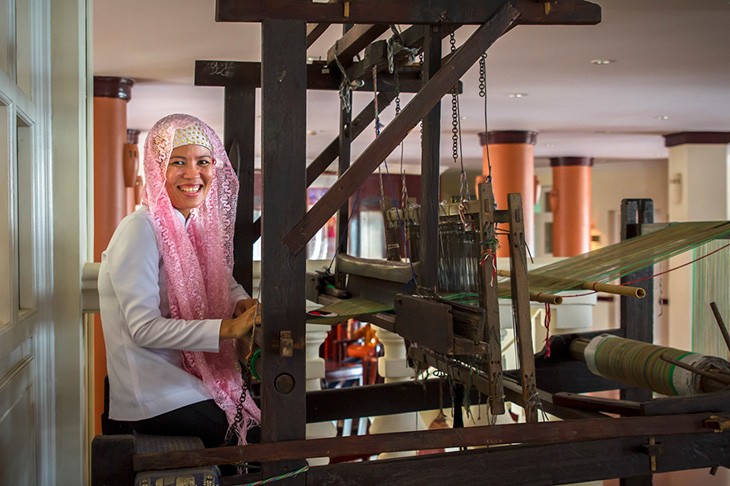 The Gift Shop: A few steps past the lobby, a glass-enclosed gift shop offering the standard t-shirts, key rings and postcards. The real gems were the scarves on display – intricately woven textiles in deep purples, pale pinks and a host of other hues. As if to prove authenticity, a young woman from a local Cham village sat at a nearby loom, her fingers flying to transform ordinary threads into soft-as-air fabric. Where else can you see hand-making of a hand-made gift?

The Restaurant: Offering a blend of the tangy flavors of Vietnam with the artistry of French cooking (with some Western dishes on the side), the menu at the Bassac Restaurant would appeal to foodies and non-foodies alike. During our trip, my boyfriend and I ate a lot of Vietnamese fare from street vendors; we prefer dining like the locals to sample truly authentic cuisine. But for this meal, Patrick ordered the Roasted Australian Lamb Rack served with Ratatouille from the Western portion of the menu. It was exquisite, he said, roasted to a perfect medium rare

I feasted on the Vietnamese dish Bo Luc Lac, meaning “Shaking Beef.” It was stir-fried beef tenderloin, moist and flavorful over greens laced with fish sauce, basil and ginger. The meal rivaled the best we found of street food. 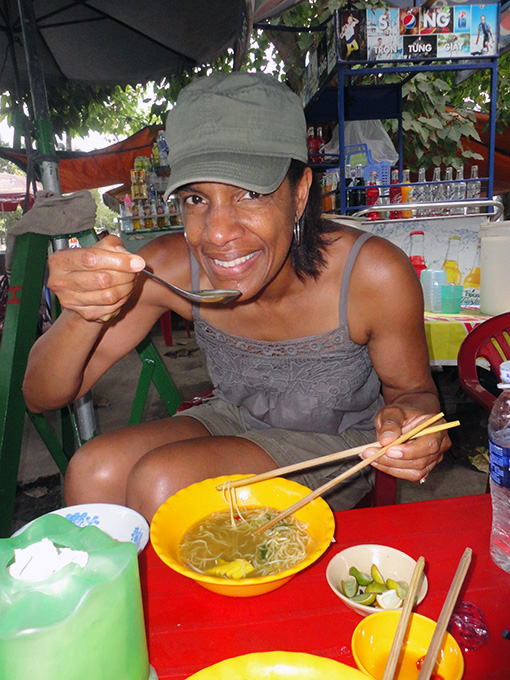 First Impressions: From the Victoria Chau Doc, we took a hotel van several miles from the city to Sam Mountain (which translates as “Nui Sam” in Vietnamese). We ascended a winding road that hugged the curves of the mountain. I expected the Victoria Hotel Nui Sam Lodge to emerge just around the next bend, then the next and then the next. But we appeared to be headed for the sky.

When the driver pulled up to the pagoda-style lodge complex and I exited the van, I stopped in my tracks at the view. Just as its sister property provides the visual delight of the Mekong Delta, the Nui Sam Lodge boasts a spectacular view of Chau Doc and its surrounding geography.

The Property: Goldenrod columns anchor the lodge’s facade, topped by roofs with upturned edges in true pagoda style. Yet, the Asian influence gives way to a more rustic, laid back and Western feel. Rather than individual rooms, the property is comprised of quaint bungalows, fitted like stair steps against the slope of the mountain.

The word “bucolic” is defined as “relating to the pleasant aspects of the countryside,” and the adjective fits here. Walking the grounds is like strolling through narrow country lanes studded with native plants, willowy saplings and herb plants and vegetables – the latter two used to prepare meals at the restaurant.

The Rooms: Bungalows with roofs of curved tiles made of red clay were attractive alternatives to traditional hotel rooms. True to its 3-star rating, the spacious accommodations were satisfactory – clean and airy. The real draw were the tiled patios each bungalow opens onto. Enclosed and private, they offered another vantage point for taking in the scenery below.

The View: There was good and bad news for us regarding the view. The good news was that being perched high on Nui Sam provided a sweeping vista of seemingly endless rice fields. At another time of year, they’d have been a lush, verdant carpet.

The bad news was that we visited in April, part of the dry season. Many of the green fields had turned to a patchwork of varying shades of brown. Still, from our bungalow’s patio the colors were compelling – the green shrubbery of the hotel’s landscape, the red tile of its roof and the deep turquoise of the swimming pool against the tan plains . 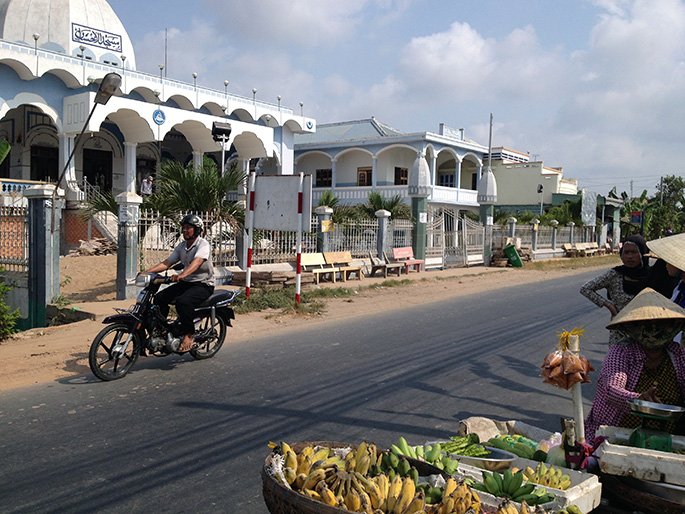 The Temple: The lodge is close to Ba Chua Xu Temple, a place of reverence for Buddhists. One tour guide told us that up to five million worshippers visited in one year. A trip to Chau Doc would not be complete without seeing, “Ba Chua Xu” which means “Lady of the Realm.” It refers to the towering statue around which the temple was built.

According to legend, the statue sat atop Nui Sam until thieves dropped it while carrying it down the mountain. They fled. Villagers attempted to bring the statue the rest of the way down, but it wouldn’t budge. Eventually, nine virgins were able to pick up Ba Chua Xu with little effort, transport it to flat land, where a temple was built around it. The statue is so powerful that worshippers believe she will grant all the wishes of anyone who offers her incense.

The Solitude: We were among only a few guests staying at the Victoria Hotel Nui Sam Lodge. Apparently, many tourists who visit Chau Doc each year have yet to discover the lodge’s charms. The benefits of being far from the crowds were obvious. Frequently, we had the pool to ourselves. The wait staff, who displayed impeccable service in general, focused most of their energies on the two of us. And the quiet surroundings were just what we needed to end our stay in one of the most tranquil cities of Vietnam.