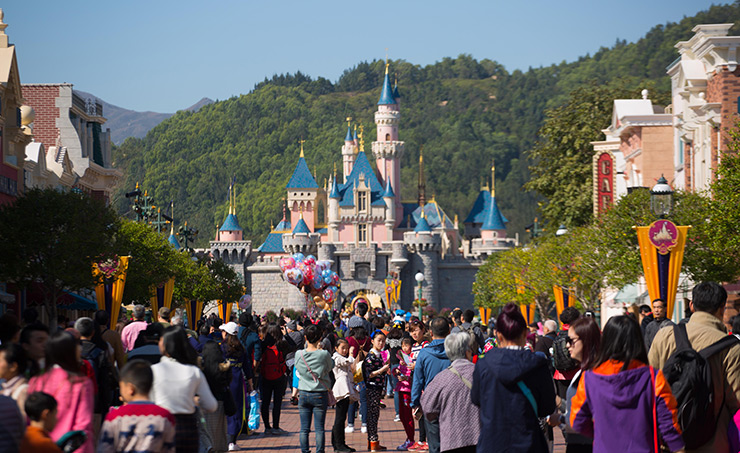 It happened after we climbed out of the boat on the Jungle River Cruise, but before we slid into the seats of the Toy Story Parachute Drop. Two 50-something, jet-lagged American tourists turned into giddy children at the Hong Kong Disneyland Resort. I wanted to skip, twirl around and laugh as only a child can. By the grin on his face and spring in his step, my boyfriend Patrick felt the same. We didn’t need any kids because we were the kids — Jeanette Valentine, Soul Of America

Actually, Patrick got religion earlier, when we first entered the park and saw iconic Mickey Mouse laid out in floral splendor in front of the brick train station.

“How cool is this?” I asked him as we walked through the Main Street USA plaza.

Like its sister properties in the United States, France and Tokyo, Hong Kong Disneyland is made up of self-contained little worlds of fun – Adventureland, Fantasyland, Grizzly Gulch, Main Street USA, Mystic Point, Tomorrowland and Toy Story Land, the latter of which we came upon first. I turned around to go back because these rides were truly for little ones. We had a “child at heart” vibe, but did that justify going on the kiddie rides? Of course it did, especially since we were channeling six year olds anyway. 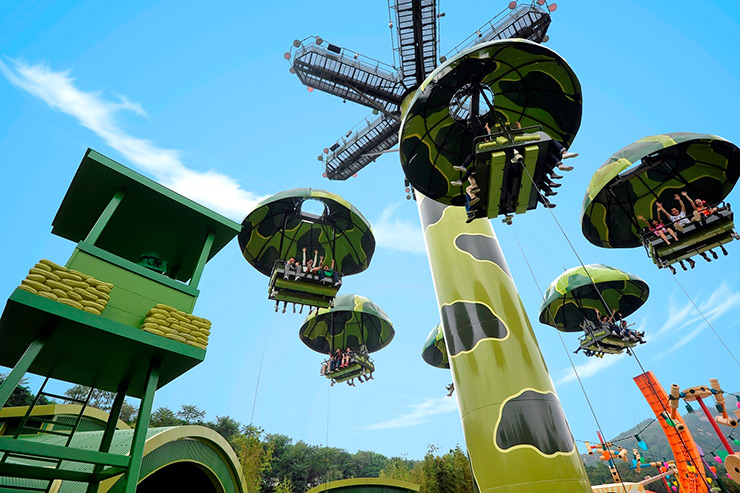 First up was the Toy Story Parachute Drop, a simulation of how paratroopers jump from airplanes. We climbed into green seats, a camouflage parachute above our heads; buckled the belts and were hoisted into the air, only to be dropped downward with a stomach-churning lurch. Instead of gritting my teeth and hanging on for dear life – which I’ve been known to do at amusement parks – I couldn’t stop giggling.

Before the morning was over, we’d taken a ride on Slinky Dog Spin, a roller coaster for the elementary school set, and ridden through HYPER Space Mountain. I emphasize HYPER, because the last time I was at Disneyland, it was just plain ‘ole Space Mountain. The twists, turns, drops and climbs did seem a little more hyped than I remembered.

When played on a continuous loop, “It’s a Small World After All,” is the kind of song that can get stuck in your head, and not in a good way. We had low expectations as we boarded a boat that skimmed the waters of a dim cave. But the brilliant blues, reds, oranges, purples and yellows that illuminated the dark backdrop looked magical.

More than 300 dolls wrapped in the native costumes of their countries, singing that song and moving in rhythmic formation, populated the large alcoves we passed. Each turn around a curve took us into another region of the globe – Asia, Africa, Europe and North and South America. Early on, we joined the dolls and sang “It’s a Small World After All” over and over again. And over again. And over some more. And some more. 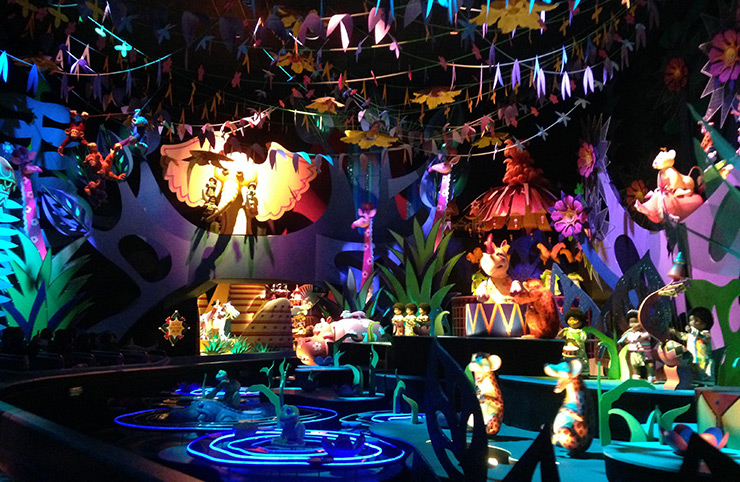 The highlight of the Disneyland experience came as we ambled our exhausted selves toward the exit. We came across a small stage on which Black Panther was holding court with fans, one by one, from a line of about 50 people. I pulled Patrick to the end of the line, knowing that I had to get a photo with the King of Wakanda.

Unfortunately, a Disney employee told us quite nicely that no one else could get in line because even Black Panther needed a break. I launched into a heartfelt plea about me being the sole black person in the entire park, but the “only doing my job” young man said no.

T’Challa left the stage after shaking hands with the last person. And, of course, I stood in the front of the next line for an hour. Scores of people lined up behind me, and we were eventually rewarded with a Royal trumpet fanfare and a baritone voice announcing that, all the way from Wakanda, the deepest part of Africa, was Black Panther.

By this time, my patient boyfriend had found a prime photo-taking place and was ready with his iPhone. I greeted the Wakanda King with a handshake, and he pulled me into an embrace. With a Cantonese accent he asked, “Are you from Africa?” And he was serious! I laughed until I almost cried.

We mugged for the smart phones of dozens of people in line, including me copying his arms-across-the-chest salute. After he gave me a final hug, I glided over to Patrick. The two of us left Hong Kong Disneyland, grateful for our day-long adventure into childhood. 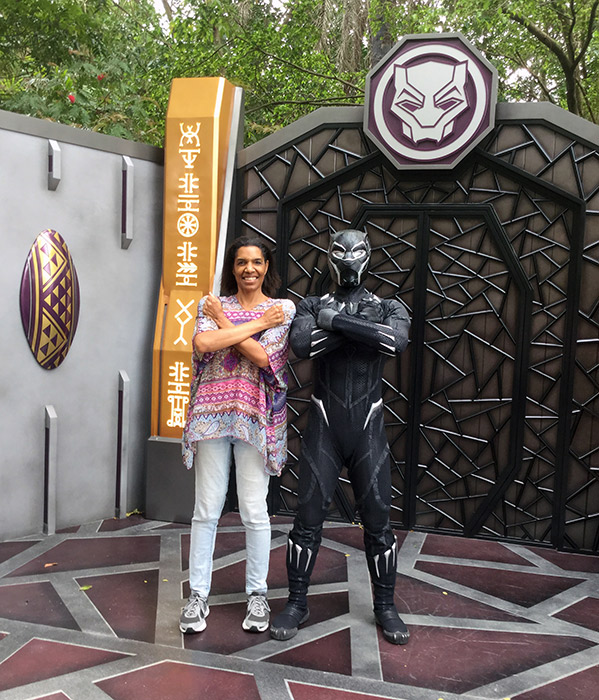