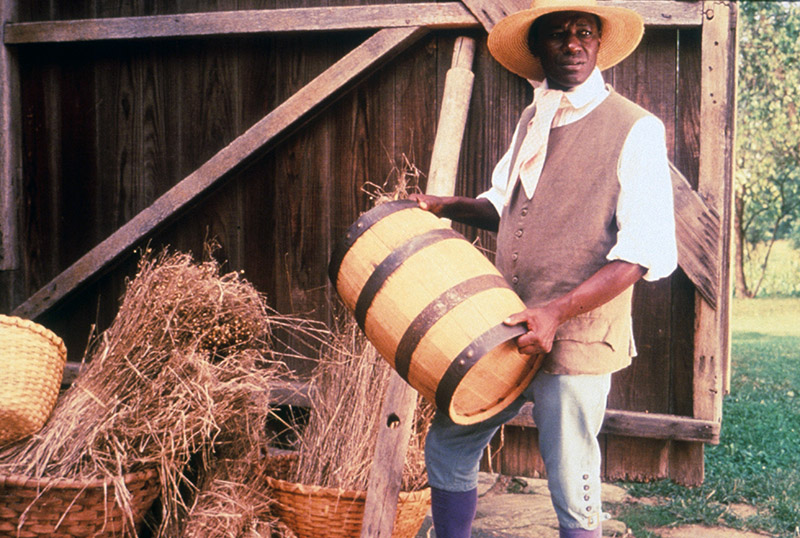 The history of African Americans in the Piedmont region is closely linked with that of the German Moravian Protestant group, which settled in nearby Piedmont in 1753. In 1766, the Moravians established Salem. The Moravians did not see African Americans as equals, but they did see them as having more rights compared to other European Americans. Their greater concern was for the spiritual welfare of enslaved people. In other words, they believed in slavery, but they also believed that Christian literacy was important for the soul.

So within the Moravian enclave of Salem, enslaved people enjoyed more freedoms and literacy provided they strictly adhered to Moravian teachings. This social custom let European American Moravians bypass a moral dilemma with their faith while enjoying the fruits of slavery.

St. Philips Moravian Church in Old Salem was established in 1822 and became the center of learning for enslaved people. Unfortunately at the same time, the prevailing sentiments of European Americans towards slavery began to soak into the Moravian culture. Respect for Black humanity and rights began melting away.

Nearby tobacco, furniture, and textile slaveholders knowing that you can’t keep people enslaved if you don’t control their minds helped enact a state law in 1831 that prohibited teaching literacy to enslaved people. Even the Moravians established separate places of worship in Salem.

By 1849 Winston, a short distance from Salem was established as the county seat and quickly became another bustling commercial center in the region. Considering the stakes involved for slaveholders, they sought to repress any effort that threatened their privileged prosperity. Educating slaves was considered a criminal threat to white supremacy. Thus, the African American Moravian church and their literacy movement were forced underground.

After the Civil War skilled Black craftsmen in Winston-Salem emerged to market their services throughout the Carolinas, though many African Americans continued work on the tobacco farms and mills. The Moravian church remained a driving force in Winston-Salem, helping many of the skilled and literate to attain elevated social status.

By 1881, Israel Clement was the first African American elected to the Winston school board. Sensing that integrated schools would not attract a majority of public support in 1883, years before the infamous Plessy vs. Ferguson Supreme Court decision, Winston organized separate black and white schools systems.

By 1925 Winston-Salem Teachers College, later renamed Winston-Salem State University an HBCU, was granted state charter. In 1926 the Safe Bus Company received its state charter and began providing African Americans a way to and from work. WAAA became the state’s first Black radio station in Winston-Salem in 1950.

After returning from World War II and the Korean War, many African Americans became fed up with segregation. A substantial gathering of college graduates and successful businesses in the area also raised their aspirations. Despite many legal challenges and school board hearings in the 1950s, local leaders were pretty much consigned to the status quo of segregation.