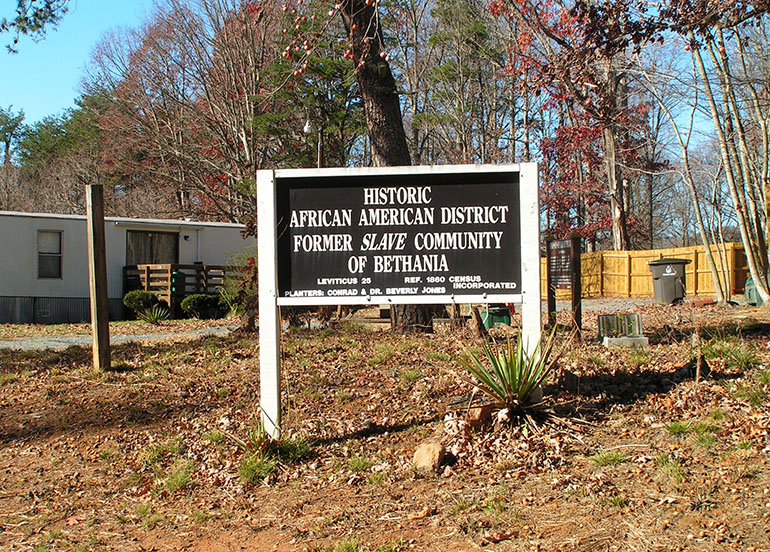 Winston-Salem Heritage Sites include a wide base of black churches for a city of its size.

St. James AME Church
DESCRIPTION: A loosely-knit congregation at its 1877 inception, the church found permanence for its congregation when it organized under AME bishop leadership in 1882. The church remains a force for social change and comfort.
SUNDAY WORSHIP: 10a
ADDRESS: 1501 Patterson Avenue, Winston-Salem, NC MAP
PHONE: 336-724-3865
WEBSITE: http://www.st-james1501ws.com

Lloyd Presbyterian Church
DESCRIPTION: Founded in 1886 by Northern missionaries outreaching to African Americans; one of the oldest Black churches in the region and on the National Register of Historic Places.
SUNDAY WORSHIP: 11:30a
ADDRESS: 748 Chestnut Street, Winston-Salem, NC MAP
PHONE: none listed
WEBSITE: http://lloydpres.com

Goler Memorial AME Zion Church
DESCRIPTION: Established in 1881, it is one of several in the region listed on the National Register of Historic Places; Goler takes its name from Dr. W.H. Goler who briefly served as pastor and donated land for the present church site in 1886.
SUNDAY WORSHIP: 11a
ADDRESS: 630 Patterson Avenue, Winston-Salem, NC MAP
PHONE: 336-724-9411
WEBSITE: none

Bethania Community
DESCRIPTION: The second of the villages of Wachovia, Bethania, was laid out in 1759, in part to deal with the crowded conditions brought on by refugees; After only 13 years in the wilderness, some 166 people lived in the two communities; it later became known as a slave community.
ADDRESS: Bethania Road at Bethania Rural Hall Road, Winston-Salem, NC MAP

Old Salem
DESCRIPTION: There are many still standing structures that housed African Americans as residents or workers during the times of the Moravian congregation, including the Davy House, Single Brothers House, Miksh House, Volger House, and Salem Tavern. This town is also notable for schools and other public facilities that featured integrated settings nothing less than extraordinary for the South. God’s Acre cemetery in the 1770s buried Moravians of African descent side-by-side with Moravians of European descent and Salem Academy and College admitted its first African American female in 1785. Juxtaposed against the more enlightened treatment of humanity in Old Salem, one can also point to Happy Hill just east of St Philips Church where the first enslaved people in the region were kept by Dr. Frederick Henry Schuman in 1816.
ADDRESS: south of downtown Winston-Salem, NC MAP

African Moravian Church
DESCRIPTION: A log cabin church was built here in Old Salem in 1823, a year after their separate congregation was established due to exclusion by the European Moravian congregation from the nearby Home Moravian Church. This edifice is the nation’s oldest African American Moravian congregation. The church briefly served as a Freedmen’s hospital after the Civil War. It has been reconstructed as a historic site.
ADDRESS: Church Street just before it bends into Race Street, Winston-Salem, NC MAP