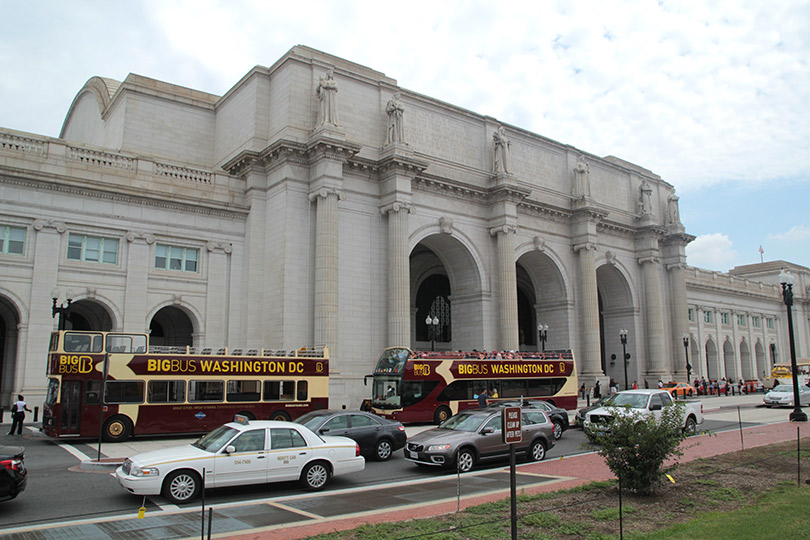 Ronald Reagan National Airport (DCA) specializes in domestic flights to the eastern half of the country. DCA Airport has its own Metro Station. Taxis: Diamond and Yellow cabs at the ground transportation level are plentiful. Super Shuttle (800-258-3826) is also available for the short ride downtown.

Car Rentals: Alamo, Avis, Budget, Enterprise, Hertz, National, and Thrifty have 24-hour service at both airports. There is a confusing web of roads exiting the airport by rental car, so use caution and follow the EXIT TO WASHINGTON signs to get to the George Washington Parkway (I-395). If you are driving to downtown or the Federal District, watch for the fast-approaching 14th Street North exit off the parkway. If you miss that exit, there is another northbound exit shortly afterward. DCA AIRPORT TERMINAL MAP.

Dulles International Airport (IAD) specializes in coast-to-coast and international flights. It features a soaring architectural design whose terminal navigability is finally catching up with its looks by adding an underground people mover. Shuttle: catch the Washington Flyer (703-685-1400) motorcoach from Dulles Airport to downtown. Car Rentals: Alamo, Avis, Budget, Enterprise, Hertz, National, and Thrifty have 24-hour service at both airports.

Though delayed by the pandemic, nextgen Acela trains featuring speeds up to 160 mph begin service in fall 2023. They will run more frequently and include more amenities for an exceptional passenger experience. See Amtrak Acela journey towards world-class service.

Metrorail transit system consists of 6 lines that intersect many hub stations covering 105 miles of subway and aerial track. Clean, dependable, and featuring several architecturally interesting stations, Metrorail makes it easy to get around Washington DC without a car. Best of all, Metrorail takes you places every visitor wants to see, except Georgetown, where taxis are good options. Metrorail Hours of Operation: Mon-Fri 5:30a-12p and Sat-Sun 8a-12p.

Metro Silver Line finally opens Dulles International Airport in summer 2022. With the exception of New York and Chicago, no other city Metrorail lines are as comprehensive, see: METRO SYSTEM MAP.

Metrorail fares depend on where you go and a premium is charged during Rush Hours. Visitors should purchase a one-day, weekend, or fixed dollar amount Farecard to avoid the cumbersome fare scheme. Two children up to age 4 travel free with a paying customer. Metrorail has good station signage with useful system maps and is ADA compliant, though elevators are sometimes difficult to locate. In a nice touch, all stations feature bumpy tiles to alert sight-impaired patrons that they are nearing the platform edge.

After a number of delays, two DC Streetcars begin service along H Street/Benning Road and Anacostia in 2016. Complimenting Metrorail, they mark a return of streetcar service to Washington after a 50-year hiatus.

Site Seeing Tours
More than just a guided tour, they aim to set the record straight. Hear from those who lived the history that fascinates us and created the legacy we honor. Walk to popular and lesser-known sites in vibrant neighborhoods of historic significance. Visit institutions at the center of life in Washington, during and after the Civil War, and today. Take one of their incredible pre-packaged tours:

KB Tours
Amaze your convention, school, church, or civic group with an excellent and exciting tour of Washington. We will use your bus or provide a luxurious bus. Our 4-Hour Tour will include Frederick Douglas House, African American Civil War Memorial, Howard University, and many other sites.
PHONE: 301-248-6360
WEBSITE: http://www.Tourwashingtondc.com

Washington Freeway Network very crowded during commute hours. Interstate 95 never runs through DC. Instead, it merges with I-495 on the eastern half of the Washington Beltway, then splits into its own freeway again in Maryland and Virginia. You can only enter/exit Dulles Airport Toll Road from Dulles Airport, I-495, and I-66 freeways.

Only I-395 Freeway takes you to Federal Center/Downtown. It has a northern spur to New York Avenue, which is good for reaching Howard University and U Street. Otherwise, DC freeways are an afterthought. Witness the clueless I-295 to I-395 intersection across the Anacostia River and lousy signage. Drivers on DC surface streets beware. Landscaped circles that bisect boulevards confuse first-timers and slow traffic for all. Embassy limousine drivers sometimes run red lights and cause accidents with legal immunity. It’s a good thing you have Metro as an option to many places.