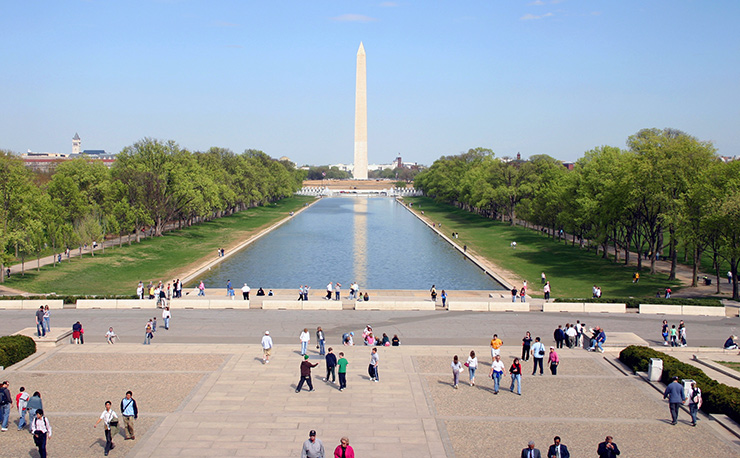 Washington Monument
DESCRIPTION: Honoring America’s first president, it may surprise you to know this 555 feet tall obelisk monument was built in fits and starts due to lack of funds, lack of public interest and the Civil War. The cornerstone was laid in 1848, but it was not opened to the public until 1888. visitor tickets are required to tour the top of Washington Monument by elevator. They are Free for those not minding the wait in long lines. Tickets are distributed from the kiosk at 15th Street and Madison Drive. If you can’t stand lines, reserve tickets up to 5 months in advance by calling 800-967-2283.
ADMISSION: free
DAYS & HOURS: daily 9a-4:45p
ADDRESS: Center of the National Mall, Washington DC MAP
PARKING: street parking
RAPID TRANSIT: Smithsonian station
WEBSITE: http://www.nps.gov/wamo

World War II Memorial
DESCRIPTION: After President Clinton signed into law a commission to establish this memorial, we can thank Tom Hanks and Steven Spielberg for raising funds to get it built. The circular outdoor memorial with pavilion pillars honors the 16 million Americans who served in the armed forces during World War II. About 400,000 American soldiers died and millions more supported the war from home, including the Tuskegee Airmen and the balloonists on D-Day at Normandy. It is one of the most visited memorials in DC.
ADMISSION: free
DAYS & HOURS: 24/7
ADDRESS: West of the Washington Monument, Washington DC MAP
PARKING: street parking
RAPID TRANSIT: Smithsonian Metro Station
WEBSITE: http://www.wwiimemorial.com

Abraham Lincoln Memorial
DESCRIPTION: America’s most beloved monument overlooks the Reflecting Pool and Washington Monument. Inside, a 19-foot marble statue of the 16th President is flanked by inscriptions of his Second Inaugural Address and Gettysburg Address. From the grand steps of this monument, the world came to know America’s Civil Rights Movement and Rev. Dr. Martin Luther King, Jr. during the March on Washington in August 1963. Though he gave the speech before, this is where most of the world heard his “I Have A Dream” speech. Always remember that A. Philip Randolph and Bayard Rustin deserve the lion’s share of the accolades for conceiving and organizing a march that drew 250,000 people and accelerated momentum towards Civil Rights legislation that has forever changed our nation for the better.
ADMISSION: free
DAYS & HOURS: daily 8a–midnight
ADDRESS: West Potomac Park at 23rd Street NW, Washington DC MAP
PARKING: street parking
RAPID TRANSIT: Foggy Bottom/GWU Metro Station
PHONE: 202-426-6841
WEBSITE: http://www.nps.gov/linc

Thomas Jefferson Memorial
DESCRIPTION: Beneath the iconic rotunda, a magnificent 19-foot statue of president Thomas Jefferson is surrounded by passages from the Declaration of Independence, to which Jefferson is credited for writing a the largest chunk thereof. To his eternal dishonor and fully cognizant of its moral significance, Jefferson never freed his slaves.
ADMISSION: free
DAYS & HOURS: daily 8a-midnight
ADDRESS: 15th Street SW at Tidal Basin, Washington DC MAP
PARKING: free parking lot nearby
RAPID TRANSIT: none
PHONE: 202-426-6841
WEBSITE: http://www.nps.gov/thje

George Washington’s Mount Vernon Estate
DESCRIPTION: The slave burial ground on his estate is located on the hill overlooking the Potomac River, near George Washington’s tomb; in 1983 a large memorial to the slaves designed by Howard University students was dedicated at the site; unlike most other Southern plantation owners, to his credit, George Washington’s will freed his slaves.
ADMISSION: $13 Adults, $6 Ages 6-11, others enter Free
DAYS & HOURS: daily 9a-4p, longer hours depending on season
November through February, 9a-4p
ADDRESS: 3200 Mount Vernon Memorial Highway, Mount Vernon, VA MAP
PARKING: on premises
RAPID TRANSIT: none
PHONE: 703-780-2000
WEBSITE: http://www.mountvernon.org