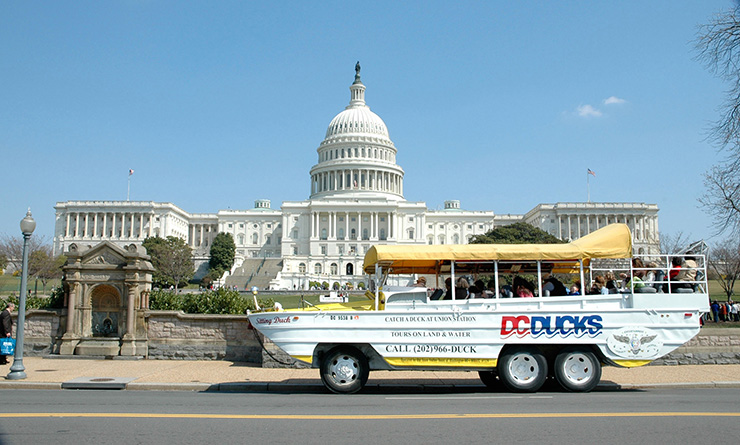 Ride the Ducks boat to the U.S. Capitol

White House
DESCRIPTION: After viewing it from the outside, see the orientation film and free brochure at the nearby Visitor Center. It takes 90 minutes to explore all the exhibits, which include architecture, furnishings, first family history and relations with world leaders.
ADMISSION: Free
DAYS & HOURS: daily 7:30a-4p
ADDRESS: 1600 Pennsylvania Avenue NW, Washington DC MAP
PARKING: for get about it
TRANSIT: Federal Triangle and Metro Center stations
PHONE: 202-208-1631 or 800-717-1450
WEBSITE: http://www.whitehouse.gov

Old Post Office Pavilion
DESCRIPTION: Opened in 1899, the original Post Office embodied innovative steel and granite architecture as DC’s first skyscraper at 12 stories. It was built to house both the U.S. Post Office and the DC Post Office and was the largest and tallest government building in the city. Though nearly demolished in the 1980s, preservationists saved it and convinced a developer to restored it with shops and restaurants. It is now being converted to a hotel.
ADMISSION: Free
DAYS & HOURS: Mon-Sat 10a-7p, Sun Noon-7p; longer Summer
ADDRESS: 1100 Pennsylvania Avenue NW, Washington DC MAP
PARKING: garage on premises
TRANSIT: Federal Triangle Metro Station
PHONE: 202-289-4224
WEBSITE: http://www.oldpostofficedc.com

Freedom Plaza
DESCRIPTION: Viewed from above, the plaza displays L’Enfant’s landscape plan for DC. Interspersed throughout the plaza are engraved quotes from John Adams, Alexander Graham Bell, and Martin Luther King, Jr and others. Dr. King fine-tuned his I Have A Dream speech at the Willard Hotel facing the plaza. Beneath the plaza is the time capsule containing Dr. King’s bible, robe and other memorabilia. It was planted on 15 January 1988 and re-opened 15 January 2008. It is not coincidence that it has become a popular place for political protests and civic events.
ADMISSION: Free
DAYS & HOURS: 24/7
ADDRESS: Pennsylvania Avenue at 12th Street NW, Washington DC MAP
PARKING: garage nearby and on street
TRANSIT: Federal Triangle Metro Station
PHONE: none
WEBSITE: none

Georgetown
DESCRIPTION: Partly a historically black district that evolved into a premier village in the nation’s capital known for its charm and human scale. Explore the diverse activities available in Georgetown by clicking on your category of interest. Stroll the unique C & O Canal and Shop and dine at dozens of eclectic and upscale shops on M Street and adjoining historic streets. Enjoy restaurants on Georgetown’s beautiful waterfront or take a river cruise, if you like. The district includes a number of secret gardens and foreign embassies.
ADMISSION: Free
DAYS & HOURS: dawn until late
ADDRESS: M Street, Washington DC MAP
PARKING: garage nearby and on street
TRANSIT: Circulating tour bus between Georgetown and Union Station
PHONE: 202-298-9222
WEBSITE: http://www.georgetowndc.com

Adams-Morgan
DESCRIPTION: At one time, DC’s hottest district for funky shops and ethnic restaurants, it has become an ethnically diverse neighborhood of immigrants and young urban professionals comfortable with itself and all who visit. That diversity is good news for tourists who can sample from a couple dozen cuisines and nightclubs within blocks of each other.
ADMISSION: free
DAYS & HOURS: dawn until late
ADDRESS: 18th Street and Columbia Road NW, Washington DC MAP
PARKING: on street
TRANSIT: DuPont Circle Metro Station
PHONE: 202-232-1960
WEBSITE: http://www.ammainstreet.org

Newseum
DESCRIPTION: Opened in 2008, this 250,000-square-foot museum offers visitors an experience that blends five centuries of news history with current technology and captivating interactive exhibits. Permanent exhibits include Surrounded by the Flow of Information, The Story of News, Chronicling an Attack on America, Getting the News Electronically, Award-Winning Images and Photographers Who Took Them, A Barrier That Couldn’t Block Information, 45 Words of Freedom, News and Press Freedoms Around the Globe. Every morning more than 600 newspapers from every state and from countries around the world submit their front pages to Newseum via the Internet to be part of the Front Pages From Across America and Around the World. See OBAMA MAKES HISTORY: 700+ newspaper front pages on 5 November 2008
ADMISSION: $20 Adults, ages 65+, $18 military and students, $13 ages 7 to 18, ages 6 and under Free
DAYS & HOURS: daily 9a-5p
ADDRESS: 555 Pennsylvania Avenue NW, Washington DC MAP
PARKING: public garages nearby; rates vary
TRANSIT: Archives/Navy Memorial-Penn Quarter Metro Station
PHONE: 888-639-7386
WEBSITE: http://www.newseum.org

International Spy Museum
DESCRIPTION: Dedicated to the trade craft, history, and contemporary role of espionage. It features the largest and most fascinating collection of international spy-related museum artifacts and exhibits from across the globe. For a bonus, look at the old the historic buildings comprising the museum which were constructed between 1875 to 1892.
ADMISSION: $15 Adults, $12 ages 5-11, ages 4 and under Free
DAYS & HOURS: typically 10 am to 6 pm with last admission at 4p; special events stay open longer
ADDRESS: 800 F Street NW, Washington DC MAP
PARKING: garages nearby
TRANSIT: Gallery Plaza-Chinatown Metro Station
PHONE: 202-393-7798
WEBSITE: http://www.spymuseum.org

National Museum of the American Indian
DESCRIPTION: Opened in 2004, this stunningly beautiful venue is dedicated to the Native peoples of North, South and Central America. Occupying 260,000-square feet, it has the most extensive collection of Native American art and artifacts in the world representing over 10,000 years of history. Its galleries include: Our Universes, Our People, Our Lives, Native Modernism, Native American Boat-building. The hallmark of this museum is that exhibitions and programs are presented in the Native American voice and perspective; enter at the east entrance of the museum for the best effect.
ADMISSION: Free
DAYS & HOURS: daily 10a-5:30p
ADDRESS: 4th Street & Independence Avenue SW, Washington DC MAP
PARKING: limited garage parking on premises and on street
TRANSIT: L’Enfant Plaza Metro Station and Federal Center SW Metro Center
PHONE: 202-633-1000
WEBSITE: http://www.nmai.si.edu

United States Holocaust Memorial Museum
DESCRIPTION: No other venue in North America better interprets the Holocaust in Europe where over 5 million Jews and tens of thousands of gypsies and Poles were killed by the Nazis. A number of sobering special exhibitions and an extensive archives document that period of human history. Many architectural details of the building allude to elements of the Holocaust. Due to heavy demand, timed passes are necessary for visiting The Holocaust exhibition. Get them at least 1 day in advance.
ADMISSION: Free
DAYS & HOURS: daily 10a–5:30p, except Christmas and Yom Kippur
ADDRESS: 100 Raoul Wallenberg Place SW, Washington DC MAP
PARKING: limited parking on street
PHONE: 800-400–9373
WEBSITE: http://www.ushmm.org

National Building Museum
DESCRIPTION: It was designed by Army Quartermaster General Montgomery C. Meigs in 1881 and constructed by 1887. This gorgeous building once housed the U.S. Pension Bureau to award Union veterans. Meigs, an innovator in building technology, designed this building to provide natural air-conditioning by using air vents in the exterior walls, where hot air escaped through skylights in the roof. The upward flow of air would draw in fresh air through the exterior wall openings near the bottom; from the time it was built, it was criticized for not fitting in with Washington’s architectural scheme. Today, it is acknowledged as an engineering marvel and was designated as the National Building Museum in 1978. As America’s premier cultural institution celebrating architecture, engineering and urban planning, it’s a great place to take kids and adults who like to build things. Guided tours are available and photography is permitted in the Great Hall only. It features a small bakery and coffee cafe.
ADMISSION: free, $5 donation suggested
DAYS & HOURS: Mon-Sat 10a-5p, Sun 11a-5p
ADDRESS: 401 F Street NW, Washington DC MAP
PARKING: limited parking on street; nearby garages
TRANSIT: Judiciary Square Metro Station
PHONE: 202-272-2448
WEBSITE: http://www.nbm.org

Watergate Complex
DESCRIPTION: President Nixon’s scandalous spying on the Democratic National Committee in this upscale office-apartment-hotel complex will forever be a place of intrigue to visitors and food for hungry novelists. An Italian designer, inspired by the human reproductive system, sculpted these set of buildings, which opened in 1967. The Democratic National Committee HQ was on the sixth floor of the Virginia Avenue building. On 28 May 1972, burglars working for Nixon’s re-election campaign put wiretaps and took photos in the DNC office. The dimwits returned on 17 June 1972 and were caught. The episode led to the downfall of Nixon.
ADMISSION: free, but not to the hotel or office rooms
DAYS & HOURS: 24/7, once hotel renovation completes
ADDRESS: 2650 Virginia Avenue NW, Washington DC MAP
PARKING: garage on premises
TRANSIT: Foggy Bottom-GWU Metro Station
PHONE: 202-965-2300
WEBSITE: http://www.thewatergatehotel.com