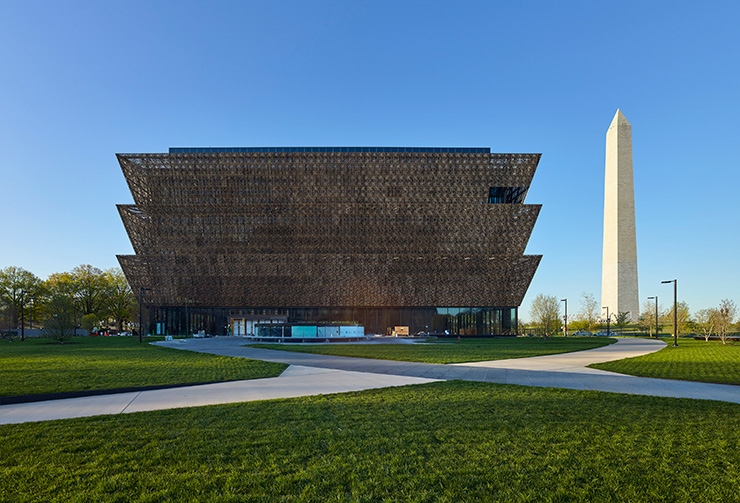 DESCRIPTION: Opened in September 2016 during the Obama Administration, the National Museum of African American History & Culture (NMAAHC) sites on 5-acres of the National Mall and is the closest Smithsonian Museum to the Washington Monument, located to its southwest. At 350,000 square feet with 5 stories above ground and 5 stories below, this astounding venue houses 35,000 priceless artifacts, documents and recordings of the contributions African Americans made to every facet of life in our 400 years of challenge, struggle and progress in America. Visitors quickly envisage how the museum unifies and strengthens special exhibits carried by other Smithsonian Museums. Slave shackles, Nat Turner’s Bible, Jim Crow-Era Southern Railway Car, Angola Prison Guard Tower, 1954 Brown vs. Board of Education Supreme Court Decision, 1955 Montgomery Bus Boycott, 1963 March on Washington, 1968 Olympic Warm-up Suit Worn by Tommie Smith, Black Lives Matter Movement and Barack Obama Presidency let you quickly imagine those eventful times in our spilt-personality nation. Many little artifacts such as African American Spoken Recordings and Literature, the passport of James Baldwin, a jacket owned by Rosa Parks, Chuck Berry’s red Cadillac, the Mothership of Parliament Funkadelic, and a show jacket and Fedora that belonged to Michael Jackson. The African American Art, Music and Sports Galleries are spectacular in scope, yet have details that beg your intimate attention.

You need 3 days to causally view exhibits on display. Since a small percentage of its holdings is displayed at one time, you can visit 3 years later and see many new items in each gallery. As NMAAHC is one of the two most popular Smithsonian Museums on the National Mall, 20-45 minutes of patience is required for entry to the massive themed cafe. That’s due to the sheer volume of patrons taking time to enjoy their meals once inside. Time-honored Soul Food and Creole cuisines of African Americans are well represented on the menu — some will leave your taste buds spellbound. The museum gift shop is a magnet for patrons seeking culturally meaningful books, garments and collectibles as keepsakes to embellish their lifestyles or homes. Hats off to U.S. Representative John Lewis’ persistence for convincing Congress to allocate land on the National Mall and contribute federal funds for half the cost, museum Founder & Executive Director Lonnie Bunche, President George W. Bush for signing off on the federal funds, First Lady Laura Bush for being on the museum board and actively soliciting corporate donations, Denzel Washington for being the key private fundraiser, and to Oprah Winfrey and Robert Smith for contributing the largest private donations to this $540 million national treasure. The National Museum of African American History & Culture is why they invented bucket lists.