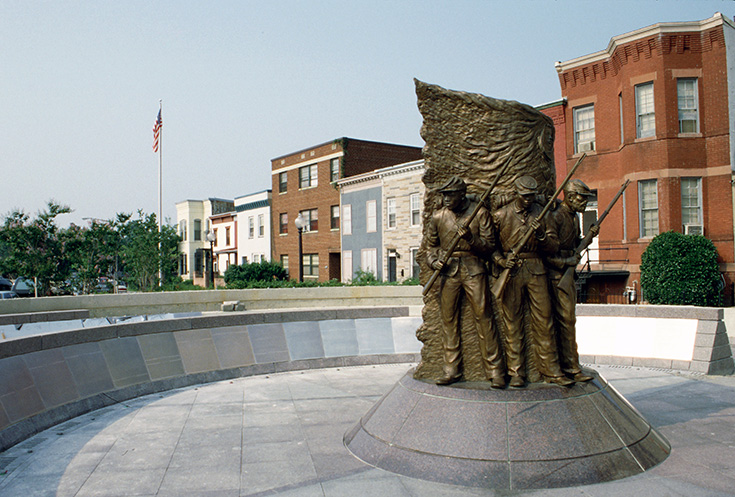 Martin Luther King, Jr. National Memorial
DESCRIPTION: With its Grand opening in October 2011, this memorial commemorates the life and work of Dr. Martin Luther King, Jr.’s pursuit of the American Dream — Freedom, Democracy and Opportunity for All; the memorial utilizes landscape elements to convey four recurring themes in Dr. King’s message: justice, democracy, hope and love; the semicircular geometry of the memorial, juxtaposed within the triangular configuration of the site facing the Tidal Basin frames views to the water and Jefferson Memorial; at the entry portal, two stones are parted and a single stone wedge is pushed forward toward the horizon bearing Dr. King’s image; symbolic of a great struggle; on the visible side of the stone, the theme of hope is presented, with the text from King’s famed 1963 speech cut sharply into the stone: “Out of the mountain of despair a stone of hope.” On the other side are inscribed these words by Dr. King: “I was a drum major for justice, peace and righteousness”; the boulder is the Mountain of Despair, through which every visitor will enter, moving through the struggle as Dr. King did during his life, and then be released into the open freedom of the plaza; the solitary stone is the Stone of Hope, from which Dr. King’s image emerges, gazing over the Tidal Basin toward the horizon, seeing a future society of justice and equality for which he encouraged all citizens to strive.
ADMISSION: Free
DAYS & HOURS: Dawn to Dusk
ADDRESS: Tidal Basin, Washington, DC MAP
TRANSIT: Smithsonian Metro Station
PARKING: on street
WEBSITE: http://www.mlkmemorial.org

Benjamin Banneker Memorial and Fountain
DESCRIPTION: An elongated circular fountain honoring the self-taught genius astronomer, surveyor, mathematician, engineer, scientific farmer, abolitionist, publisher and maker of the first striking clock of wood in America; in 1792, he published the Banneker Almanac used by farmers, merchants and educators throughout America; when Pierre L’Enfant quit the job before finishing the landscape design of the District of Columbia, Banneker provided the astronomical calculations for the project, and along with Major Andrew Ellicott, he co-surveyed the area and reconstructed the plans for street layout we see today; Banneker authored the first publicly documented protest letter denouncing the Bill of Rights as disingenuous — it was written to then Secretary of State, Thomas Jefferson, at a time when most of the “Founding Fathers” were slave-owners; Banneker Institute is authorized by Congress to fund raise a major enhancement and enlargement of the memorial.
ADMISSION: Free
DAYS & HOURS: daily
ADDRESS: L’Enfant Promenade and Maine Avenue, SW, Washington, DC MAP
TRANSIT: L’Enfant Plaza Metro Station
PARKING: garage nearby
WEBSITE: http://www.bannekermemorial.org

Duke Ellington School for the Arts
DESCRIPTION: A high school renamed in honor of Duke Ellington, it is one of the nation’s most distinguished high schools for the arts.
ADMISSION: by appt
DAYS & HOURS: Mon-Fri 9a-5p
ADDRESS: 35th Street and R Street, NW, Washington, DC MAP
PARKING: on premises and street
PHONE: 202-282-0123
WEBSITE: http://www.ellingtonschool.org

Emancipation Statue
DESCRIPTION: By modern sensibilities, this difficult to embrace statue was the first of its kind and paid for by funds from freed slaves; it shows President Lincoln in a patronizing stance over the likeness of Archer Alexander, the last man captured under the Fugitive slave Law.
DAYS & HOURS: daily, 24 hours
ADDRESS: Lincoln Park on East Capitol Street, NE, Washington, DC MAP
TRANSIT: Eastern Market Metro Station
PARKING: on street

Washington Afro-American Newspaper
DESCRIPTION: Oldest and largest Black weekly newspaper in DC; part of the Afro-American newspaper chain based in Baltimore. It is well respected for capturing the pulse of the community and chronicling civil rights progress in the nation’s capital.
ADDRESS: 1612 14th Street NW, Washington, DC
PARKING: on street
PHONE: 202-332-0080
WBSITE: http://www.afro.com

African Art Museum of Maryland
DESCRIPTION: AAMM is devoted to the art of Africa and founded by an African-American, Doris Ligon in 1980; tour the museum and marvel at the beauty and style of the skilled and discipline carvers, potters, metal workers and bead and textile designers and weavers of the art objects from Morocco to South Africa and from East to West of the second largest continent in the world; it sponsors trips to various nations in Africa.
ADMISSION: Free
DAYS & HOURS: Wed-Sat 10a-3p; other hours by appt
ADDRESS: 11711 East Market Place, Fulton, MD MAP
PARKING: Free parking
PHONE: 301-490-6070
WEBSITE: http://www.africanartmuseum.org