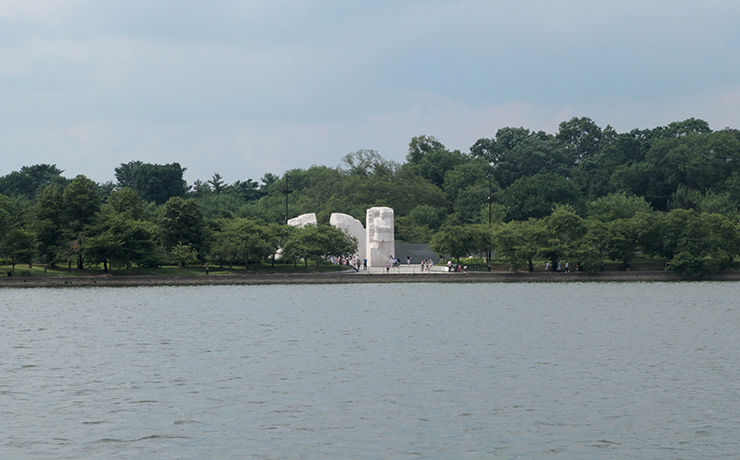 by Lysa Allman-Baldwin, Soul Of America

28 August 2013 marked the 50th anniversary of Dr. Martin Luther King’s historic “I Have A Dream Speech,” which in many ways was the crowning moment of his relentless pursuit of the American Dream — Freedom, Democracy and Opportunity for all. This monument of stone memorializes his contributions.

At the beginning of the Civil War in 1861, President Lincoln only wanted to preserve the Union. That changed by by 1865, shortly before his assassination. President Lincoln mentioned a vision of equality in this country. Dr. Martin Luther King’s speech atop the steps of the Lincoln Memorial expanded upon that vision.

All of them made the occasion momentous and told America that legalized segregation and unequal rights must end. All of them played a symbolic role towards filling that grand vision of civil rights equality.

At the end of the day, it was King’s exceptional oratory skills and widely-recognized prose intended to beget great change and equality—through non-violence—that captivated the world.

The desire to have Dr. King take his rightful place in memorial in our nation’s capital along with all of the other great national leaders of yesteryear began to take shape in 1996, when Congress authorized Dr. King’s fraternity, Alpha Phi Alpha, to establish such a memorial. Through formation of the Martin Luther King, Jr. National Memorial Project Foundation, the location, design and sculptor—renowned Chinese artist Master Lei Yixin—came to fruition.

Celebrating its Grand Opening on August 28, 2011, The Martin Luther King, Jr. Memorial stands today as not only a commemoration of Dr. King’s life and work, but also as a brilliant symbol of the strides our society has made since the Civil Rights Movement era, as well as how we must keep striving, together as a nation, to reach the mountaintop.

Located on DC’s Tidal Basin, the Memorial is fashioned in a crescent geometric pattern within a trilateral configuration that incorporates awe-inspiring views of the Abraham Lincoln and Thomas Jefferson Memorials, other great pillars of history symbolizing the shared desire to forge a nation truly for, of and by the people—all people—regardless of race, creed or color.

Whether visited during the day or at night, the Memorial is a commanding presence on the D.C. landscape, encapsulating the ideals of justice, hope, democracy and love – which appeared over and over in Dr. King’s written and oratorical messages.

Each element of the Memorial sends its own distinctive, yet collectively powerful message. There is The Mountain of Despair, symbolizing the place from where our nation lived for so many decades and tried valiantly, in many ways, to overcome. On one side is a quote from Dr. King’s 1963 speech: “Out of the mountain of despair a stone of hope.”

The Mountain is parted in two, giving way to The Stone of Hope. Created from a unique white granite with color inclusions reportedly only found in China, the Stone is the focal point of the memorial. Highlighted by King’s contemplative gaze and posture captured in a life-like, 30-foot statue, his image burgeons forth from the Stone, his arms folded authoritatively across his chest characterizing his steadfast resolve to let nothing deter him from attaining the vision of providing future generations with a society comprised of love, tolerance and equality.

Rounding out the trilateral configuration are the North and South Walls on either side of the spacious plaza, together possessing more than a dozen poignant inscriptions of vignettes from Dr. King’s sermons and talks, grand speeches and written instruments throughout his lifetime.

There was a controversy between the King family, historians and others over the abbreviated quote from a sermon Dr. King gave in 1968, “I was a drum major for justice, peace and righteousness”, inscribed on one side of the Mountain of Despair. Award-winning poet and consultant on the memorial, Maya Angelou said “The quote makes Dr. King look like an arrogant twit.” Though no solution will satisfy everyone, on 1 August 2013, the quote was removed. In order to preserve the balance and integrity of the Memorial, both sides have been reworked.

Nevertheless, the memorial’s creation and prominent placement remain as defining moments to Dr. King’s life, work and legacy, and to our country’s storied history.