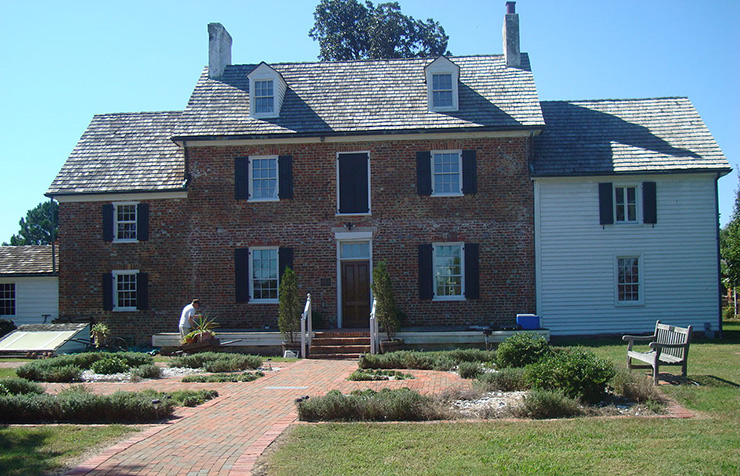 Adam Thoroughgood House
In 1621, the first permanent settlement was Lynnhaven Bay in what has become part of Virginia Beach. Adam Thoroughgood (1604–1640) was an indentured servant from Norfolk, England who arrived in Southeast Virginia the same year. He became a community leader and a member of the House of Burgesses at Jamestown. For his service, he was granted 5,350 acres on the western branch of the Lynnhaven River in 1635. Adam Thoroughgood is credited for naming Lynnhaven River and the City of Norfolk. He also named Norfolk County and the City of South Norfolk, which combined in 1963 to become the City of Chesapeake. Though Adam built a home on his property, recent archaeology suggests that this brick home was built by one of his grandsons in 1720. The house was restored in 1957 and 2011 as a museum and National Historic Landmark. It provides insight into the gentry lifestyle of Colonial Virginia. In the 20th Century, most of the Thoroughgood Estate was redeveloped into residential area.
DAYS & HOURS: call for visiting hours
ADDRESS: 1636 Parish Road, Virginia Beach, VA MAP
PHONE: 757-460-7588
WEBSITE: http://virginiabeachhistory.org/thoroughgoodhouse.html

Morning Star Baptist Church
DESCRIPTION: Founded in 1892 by members Ebenezer Baptist Church, Morningstar is one of the oldest African-American churches in Virginia Beach, or what was once known as Princess Anne County. Church members are collecting memorabilia that depict the lives of African-Americans in Princess Anne County from 1892-1950. Make an appointment for group tours of the church.
SUNDAY WORSHIP: 11a
ADDRESS: 4780 First Court Road, Virginia Beach, VA MAP
PHONE: 757-363-9698
WEBSITE: http://www.morningstarbaptistchurch.us

Heritage Plantation
DESCRIPTION: An extensively remodeled historic house on part of the land granted to William Brock, an immigrant listed in the Shirley Hundred Muster of 1624; through the years his descendants added to the land; by 1860 Ransome Brock was the owner of 8,000 acres in this area. This house, was built circa 1850 with the help of slave labor. Now faced with brick and white pillars, it is currently a nursery.
ADDRESS: 1255 Princess Anne Road in Pungo, Virginia Beach, VA MAP

Ferry Plantation House
DESCRIPTION: 1830 brick (once covered with oyster shell stucco) ten-room central passage plan Federal farm house, built by slave labor, faces the Western Branch of the Lynnhaven River as the last witness to the rich past of the site’s recorded history; t0he third courthouse, which was also the first brick courthouse in the county, was on this site; the stately Walke mansion, circa 1780, was destroyed by fire. The existing Ferry Plantation House was built, in part, of bricks salvaged from the ruins; Currently being renovated by Friends of the Ferry Plantation House, Inc. in partnership with the City of Virginia Beach, the house soon will be an educational center open to the public.
ADDRESS: 4136 Cheswick Lane, Virginia Beach, VA MAP
PHONE: 757-473-5182

Seatack Community
DESCRIPTION: Oldest Black Community in Virginia Beach; formerly known as Princess Anne County; the name was derived from the War of 1812 when the British attacked an unarmed American ship and someone called out “Sea Attack.” The community has several historic churches dating back to 1885, a community park and an elementary school to completely integrate into Virginia Beach school system.
ADDRESS: Birdneck Road, Virginia Beach, VA MAP

Fairfield
DESCRIPTION: The house built by Anthony Walke (II), between 1750 and 1770; Fairfield had liveried Black servants, blacksmiths, wagon-makers, saddlers, and tradesmen imported from England. It had a number of houses and ships, but was severely damaged by vandals in the 1970s and torn down. The Fairfield name is perpetuated by a residential community and shopping area located on the site.
ADDRESS: exact Virginia Beach site is unknown, but it is believed that the entrance to the house was on Kempsville Road just south of Princess Anne Road; the property extended to the south and west from there; the area is now fully developed MAP