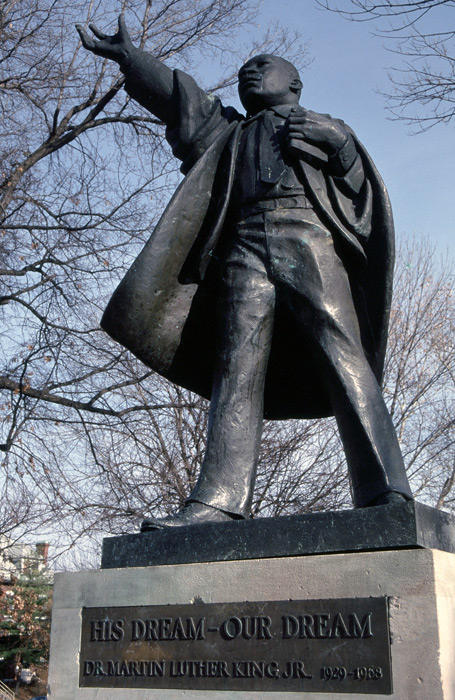 The Ville is not St. Louis’ earliest Black community, but it is certainly the most cherished. When elder Black folks talk of their old St. Louis they remember the area bounded by Taylor Avenue, St. Louis Avenue, Sarah Street and what is today called Dr. Martin Luther King Drive. Though embattled with middle-class flight to the suburbs, underemployment and other ills, this district remains a close-knit community of churches, schools, social institutions and residences. Fortunately, it was never dominated by high-rise public housing.

The Ville originally belonged to a gentleman named Charles M. Elleard. He maintained a conservatory and greenhouse on unincorporated property. He employed many workers so a town named in his honor, Elleardsville, grew up around his property. Though attracted mostly European immigrants, African Americans were among its early inhabitants and workers. St. Louis and its neighbor, Elleardsville acquired a reputation for being racially progressive for the times. For example, Elleardsville Colored School #8 (later renamed Simmons School) opened in 1873. Sumner High School was the first high school to open for African Americans west of the Mississippi River in 1875 in another part of St. Louis.

St. Louis annexed Elleardsville in 1876. With the influx of African Americans fleeing the South after reconstruction ended in 1877, the Black presence increased significantly. Antioch Baptist Church opened in 1884 and St. James AME Church was organized in 1885. Sometime afterwards residents began calling the area, “The Ville”. In 1910, Sumner High School moved from downtown to a larger, new facility in the Ville.

Both internal and external forces propelled the Ville towards becoming a self-contained Black community. In 1911 restrictive housing covenants popped up in various districts forbidding the sale or lease of residential properties to African Americans. The Ville did not have such covenants, which made it a magnet for African Americans. Annie Turnbo Pope Malone established Poro College, beauty products manufacturing plant and beauty school in the Ville in 1917. It employed nearly 200 African Americans. In 1918 and 1925, the neighborhood established an elementary school and middle school, which gave it distinction as one of the few Black communities in the region where African American students could graduate from Kindergarten to 12th grade.

Race relations being what they were in America, as the Black community grew, White flight from the Ville occurred quickly. In 1920 African Americans were only 8% of the Ville’s residents. In 1937 the huge Homer G. Phillips Hospital opened. It employed more than 800 people at its peak and was known as a teaching hospital for Black doctors and nurses nationwide. Imagine the social and economic impact Phillips Hospital and Poro College represented for the Ville. Kids could see and interact with Black doctors, managers and a female millionaire business owner! By 1950, African Americans represented 95% of the Ville’s population. That was the Ville of proud Black St. Louis folklore! It was also the time Sumner High School graduates included opera diva Grace Bumbry, Chuck Berry, Tina Turner and later, Arthur Ashe.

In an odd twist, the U.S. Supreme Court striking down restrictive covenants in 1948 was both good and bad in the context of other mega-developments. Freeways allowed European Americans to move further into the suburbs, yet commute to work & play downtown. The downside was freeways destroyed neighborhoods and depressed remaining home values near them in the city. That federal court decision allowed African Americans to move into newer houses with bigger yards at the outskirts of the city, like to Penrose, Fairgrounds-O’Fallon Park. Between 1950 and 1970, the district’s population declined by nearly 40%. With such a drop due to “White & Black Flight”, the Ville businesses struggled. Even Phillips Hospital headed for a controversial closing in 1979 despite heroic efforts to keep it open.

Today, the remaining residents have a Puncher’s chance to keep the community stable. Some good is happening, mostly downtown. But the St. Louis comeback will not be complete until the Ville rejoins the party.