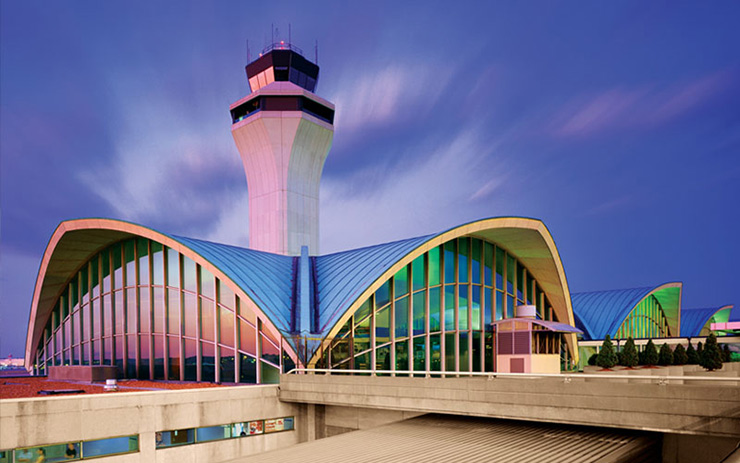 Lambert-St. Louis International Airport (STL) is an easy to navigate, mid-size airport with plenty of domestic and Canadian flights and lots of shops. Its geographic location near the nation’s middle, makes it an alternative to changing planes in Chicago for some flights.STL AIRPORT TERMINAL MAP

Metrolink light rail runs from STL Airport to downtown St. Louis. Some airport hotels have shuttles. Their pick-up phones are located by Terminal exits MT 12 & 17. Taxis are at the Main Terminal lower level. A taxi ride from STL Airport to downtown costs $30-35, depending on commute hour. Car Rentals includes Alamo, Avis, Budget, Dollar, Enterprise, Hertz, National and Thrifty. The most direct route to downtown is via airport exit signs to I-70 Freeway East; then it’s a 12 mile ride.

Amtrak service in Chicago-Springfield-St Louis corridor now runs up to 90 mph with six daily trains on smoother tracks. Once the safety system is fully implemented in 2021 (?), top speed upgrades to 110 mph. For more context on this important subject, see Interstate High Speed Rail.

MetroLink light rail transit runs every 6 minutes during peak periods, then tapers to 30 minutes in off-hours. You can get from STL airport to the Downtown convention center in 35 minutes. Service runs from 4:30a-12:57a. METROLINK SYSTEM MAP

One-Day MetroLink Pass costs under $10, which is useful if your travel plans include visits to Downtown, University City or Forest Park.

National Black Tourism Network
Specializes in tours spanning 250 years of black history covering such topics as black fur trappers and ragtime millionaires; stops include Scott Joplin‚s home and the Old Courthouse where slaves were sold and Dred Scott sued for his freedom. Reservations are required.
PHONE: 314-865-0708 or 800-490-3773

RiverBarge Excursion Lines
The only floating hotel barge traveling America’s rivers and inland waterways; it is scheduled to drop anchor in St. Louis in May 4, July 22 and August 26, 2009. When docked, they invite the public to come aboard as “BargeMates” give Free tours and answer questions.
ADDRESS: Gateway Arch riverfront
PHONE: 888-462-2743
WEBSITE: http://www.riverbarge.com

St. Louis Freeway Network is designed to get you quickly to downtown, points west and the airport and Interstates 70, 44, 64 and 55 freeways interconnect at or near downtown. Unfortunately, the freeways exits downtown can approach quickly with little forewarning by freeway signage, so be attentive. Martin Luther King, Jr. Bridge, formerly known as Veterans Bridge when built in 1951, is a dramatic cantilever truss bridge spanning the Mississippi River. It connects St. Louis with East St. Louis, IL. Renovated over the years, it is considered to be an integral part of Route 770 Highway. Get an excellent view of this bridge from Laclede’s Landing on the St. Louis riverfront.

Parking downtown is fine, except during major sporting events, where you need to arrive early. Use secured parking lots with guards and check for ID badges of the parking lot attendant, even around America’s Center and the Gateway Arch.