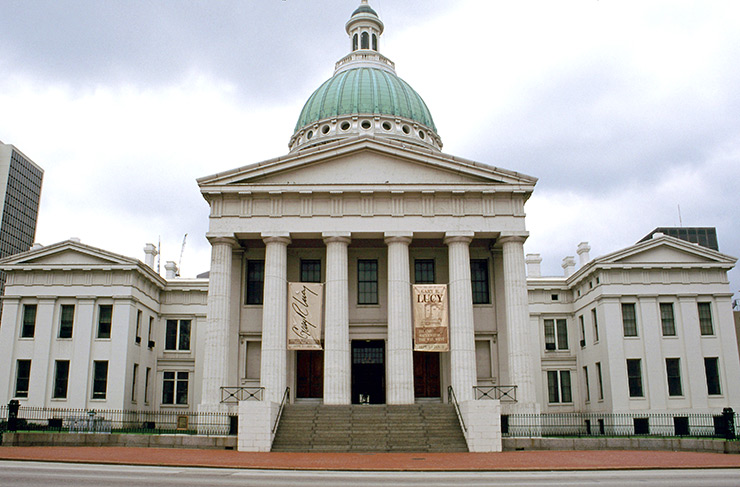 Old Courthouse where the Dred Scott Case was decided in St. Louis; (c) Soul Of America

St. Louis History begins thousands of years ago with Native America mounds sprinkled across the region. Exploration of territories unknown to Europeans and vast expansion of the United States of America launched from here. It is a focal point of the Slave State Debate and court ruling that preceded the Civil War. It seems that German beer-making and Black music traditions have been there from the beginning. As host to an early Worlds Fair, the St. Louis also debuted many 20th century inventions. From that diverse crucible, a great city was born.

St. Louis History begins in the region with an Indian civilization of mound builders who later earned St. Louis one of its nicknames, “Mound City.” They are best observe from the sky or via a National Geographic documentary.

The City of St. Louis was founded in 1764 as a trading post by Pierre LaClede. He was a French fur trader from New Orleans and recipient of a land grant from the King of France. French fur traders named the outpost for King Louis IX. Shortly afterwards, Spain gained control of the city and surrounding territory.

The Louisiana Purchase in 1803, in which the United States bought a landmass from France, today consists of 13 states including Missouri. The purchase cemented St. Louis’ reputation as the center of fur trade in America. At the time, St. Louis was a much bigger city than Chicago. This massive land acquisition triggered the arrival of 1,100 American settlers and merchants selling goods to pioneers who traveled further westward. French Canadians brought African slaves to the city.

A year after the Louisiana Purchase, explorers Lewis & Clark set out from St. Louis to chart the Louisiana Territory. Enslaved people were by then were regulated by Spanish law. Spanish slavery being more lenient, allowed enslaved people to earn extra money for work performed on evenings and weekends to purchase their freedom. As many purchased their freedom, it created a larger class of skilled and un-skilled free persons of color in the city. There were enough free people of color in St. Louis by 1818, that First African Baptist Church was founded with a solid base of membership.

With the Missouri Compromise of 1820, Missouri was admitted into the Union as a slave state contingent upon Maine’s admittance as a free state. Consequently, slaves and free persons of color often worked side by side in this border state. To avoid the hazards of a slave state, many African Americans moved west to the free territory of Kansas. Others stayed.

By the 1850, St. Louis History evolve to status a major slave-auctioning center, as buyers along the Mississippi River area traded slaves from all points of the compass to mosts states. Unlike Southern states, skilled slaves in St. Louis were rented for jobs such as printing, blacksmithing, animal husbandry and carpentry. Despite having skills and partial humanity recognized by Anglo-Americans, they were still slaves.

Dred Scott was a classic case of an enslaved person seeking freedom and recognition for his humanity in 1847. Scott was enslaved in St. Louis, but was shipped to a Free State to work for a period, then back to St. Louis. He sued his slave owners for his and his wife’s freedom on the basis that by going to a free state they became free. Although he won the first round, another St. Louis court ruled against him.

His court fight lasted 10-years. At the end of his legal battle, the Chief Justice of the Supreme Court ruled that slaves were not citizens and therefore, could not sue. That shameful judgment by the Supreme Court was a major trigger-point for free states and slave states to enter the Civil War.

While some African Americans were free, their opportunity was more limited than European immigrants. Some worked as barbers and in menial service occupations. The Reverend James Berry Meacham tried to uplift the job opportunities for African Americans. He defied Missouri state law by teaching Black children to read and write. His classes were held in a “floating school” in the middle of the Mississippi River, partly to avoid violating Missouri land-based Black Codes.

When the Civil War started, citizens fell on both the Northern and Southern sides. Many Southern-born residents of this major trade center continued slavery, while German and Irish immigrants who had to compete with unpaid slave labor sided with the North. After the Civil War, African Americans came here fleeing the Ku Klux Klan in the Deep South. In January 1865, a state provision banned slavery and required that all school boards support education for African Americans. When the academic year started, St. Louis had five schools with 1,600 black students. Local African Americans, such as James Milton Turner, Moses Dickson, John Wheeler, and John Turner led the creation of the Committee of Twenty-Five in 1879, which provided temporary housing for the 10,000 or so travelers that came through St. Louis.

In the 1904, the Summer Olympics were held in St. Louis. Sprinter George Pogue became the first black man to compete in the Olympic games.

African Americans from the South were attracted to open industrial jobs in East St. Louis, Detroit, Chicago, Gary and Pittsburgh during World War I. July 1917 marked the start of one of the bloodiest race riots in American history. The incident built up when European American union workers believed that recent African Americans from the South were hired as strikebreakers, which is perceived as lowering wages, weakening unions and taking “their” jobs. Typical of misguided rage when a party is unable to address the real problem, Anglo-American labor leaders vented on the most vulnerable target and preyed upon ignorance across the river in East St. Louis. The short story of what followed is a small group of rogue Anglo-Americans drove through a African Americans neighborhood and randomly fired shots into homes.

White detectives dispatched to investigate encountered an understandably rowdy crowd in the African Americans neighborhood. Some reports say the detectives were mistaken for more drive-by shooters. Hence, many of them were shot and killed in the black neighborhood and some misguided African Americans were also to blame. When reports of detective shootings reached white neighborhoods, a mob started. Many innocent people were killed or maimed and hundreds of homes were burned in the resultant melee for no other reason than the color of their skin. The following trial did little to bring justice or clarity to the situation. Nearly 4,000 African Americans moved away soon afterwards. To this day, East St. Louis has yet to fully recover.

Attracted by wartime production jobs such as those in the local small arms plant, the African Americans population of St. Louis increased 41% during World War II. While more African Americans immigrated, they were regulated to segregated housing and schools. In efforts to improve their access to better jobs, CORE and the Urban League protested employment policies of Southwestern Bell. Fortunately, those civil rights confrontations never escalated to violence.

African Americans created a positive image with St. Louis sports fans beginning with baseball legend James “Cool Papa” Bell in the 1920s thru the 1940s, who played in the Negro Leagues. Their team often played spirited, good-natured exhibition games with the then all-white St. Louis Cardinals. Bob Gibson and Lou Brock, who later became St. Louis Cardinals, endured the indignities to earn widespread praise as Major League Baseball Hall of Famers. They paved the way for Ozzie Smith to become the city’s most celebrated baseball hero of the latter 20th century.

Like all of America’s 18th and 19th century cities based on industrial economics and segregated housing districts, St. Louis suffered population loss and rust in the 1950s and 1960s when desegregation took root and freeways were built. Many downtown companies and retail stores moved to the western suburbs. Though greater St. Louis benefited from the Jet Age, Union Station became a basket case as train patronage dwindled. Simultaneously, downtown lost most of its retail presence and hunks of office workers to the suburbs. The flip side is African Americans later increased their voting strength to elect the first Black mayor and many city council members.

Downtown and Midtown have rebounded. Conventions, tourism, major sporting events and gambling taxes sustain the economy. Anheuser-Busch has remained faithful to the city throughout the years, keeping the Soulard district viable. Today, the wealth of historical and cultural sites, sporting venues, bookstores, restaurants, nightclubs, theater and small businesses allow all residents and visitors to take pleasure in diverse cultures here. And though Black culture is widely recognized as important to the mix, let us hope that the economic recovery expands into Black neighborhoods again.