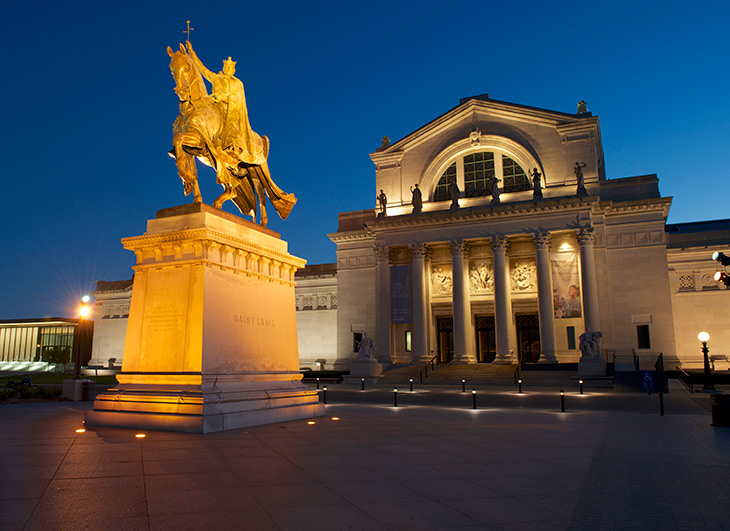 Fox Theatre
DESCRIPTION: The opulence of this 1929 theatre was befitting the attitudes of Americans just before the stock market crash. Like all the great Fox Theatres nationwide, it went through a period of gradual decline and near oblivion; then in 1981, private citizens purchased the theatre and began a painstaking $2 million restoration. Although restored close to its magnificent 1929 state, the stage and backstage were updated to accommodate contemporary entertainment with state-of-the-art sound, lighting and rigging systems. Today, the magnificent theatre is a jewel-like venue for Broadway plays and concerts. It is once again, a St. Louis favorite.
BOX OFFICE: Mon-Fri 10a-6p, Sat 10a-2p
ADDRESS: 527 North Grand Blvd, St. Louis, MO MAP
TRANSIT: Metrolink Grand Station
PARKING: on premises and street
PHONE: 314-534-1111
WEBSITE: http://www.fabulousfox.com

Powell Symphony Hall
DESCRIPTION: Erected in 1925 as the St. Louis Theatre, it presented the best in live vaudeville and motion pictures for decades; The Sound of Music was the last movie shown in the old theater. After falling on hard times, it was acquired by the Saint Louis Symphony Society in 1966. A $4 million enabled a team of internationally recognized architectural and acoustical specialists to renovate the former movie palace; today this 2,689-seat venue is named for the prime benefactor and hosts Saint Louis Symphony Orchestra. Have you ever wondered what the backstage of a grand symphony hall looks like? A complete building history highlights the FREE one-hour tour by reservation only.
BOX OFFICE: Mon-Sat 9a-5p
ADDRESS: 718 North Grand Blvd, St. Louis, MO MAP
TRANSIT: Metrolink Grand Station
PARKING: garage and paid lots nearby
PHONE: 314-286-4104
WEBSITE: http://www.slso.org

Sheldon Concert Hall
DESCRIPTION: Built in 1912 as the home of the Ethical Society of St. Louis, musicians enjoyed perfect acoustics in the concert hall. When the Ethical Society relocated to St. Louis County in 1964, The Sheldon became a music venue. In 1974, a former singer with the Duke Ellington Orchestra purchased the facility, transforming The Sheldon into a church and a venue for jazz and gospel concerts. A California attorney with a love for chamber music purchased the building in 1984 and began operating it as a venue for a broader range of concerts and events. Today, it is also home to the Sheldon Art Galleries.
BOX OFFICE: at 531 North Grand Boulevard
ADDRESS: 3648 Washington Blvd, St. Louis, MO MAP
TRANSIT: Metrolink Grand Station
PARKING: on premises and street
PHONE: 314-533-9900
WEBSITE: http://www.sheldonconcerthall.org

The Muny
DESCRIPTION: Short name for “Municipal Theater”, this amphitheater was first constructed in 1917. Since the beginning it has always hosted Shakespeare plays in the Park during warm months. Though it began as an austere venue, over years, the seats, gardens and pond surrounding the Muny have been upgraded to be one of the largest outdoor music venues in America.
BOX OFFICE: just before showtimes
ADDRESS: 1 Theater Drive in Forest Park, St. Louis, MO MAP
TRANSIT: Metrolink Forest Park-DeBalivere Station
PARKING: on street
PHONE: 314-361-1900
WEBSITE: http://www.muny.org

Pageant Concert Nightclub
DESCRIPTION: A venue built from the ground-up to host concerts, it borrowed the name of an older movie palace that was three blocks away. The seating is well designed so everyone has a clear and relatively close view of the stage; includes the Halo Bar for pre- and post-concert gatherings.
BOX OFFICE: during normal showtimes
ADDRESS: 6161 Delmar Blvd, St. Louis, MO MAP
RAPID TRANSIT: Metrolink Delmar Loop Station
PARKING: on street and paid lots
PHONE: 314-726-6161
WEBSITE: http://www.thepageant.com

Sheldon Art Galleries
DESCRIPTION: Built in 1912 as the home of the Ethical Society of St. Louis, musicians have really enjoyed the perfect acoustics of the concert Hall over the years. When the Ethical Society relocated to St. Louis County in 1964, the Sheldon primarily became a music venue. In 1974, a former singer with the Duke Ellington Orchestra purchased the facility, transforming The Sheldon into a church and the site for jazz and gospel concerts. A California attorney with a love for chamber music purchased the building in 1984 and began operating it as a venue for a broader range of concerts and events. The art galleries encompass 7,000 square feet of exhibits on photography, architecture, St. Louis artists, jazz history, emerging artists and children’s art.
ADMISSION: varies by event
DAYS & HOURS: Tue Noon-8p, Wed-Fri 12 Noon-5p, Sat 10a-2p
ADDRESS: 3648 Washington Blvd, St. Louis, MO MAP
RAPID TRANSIT: Metrolink Grand Blvd Station
PARKING: on premises and street
PHONE: 314-533-9900
WEBSITE: http://www.sheldonconcerthall.org

Tivoli Theatre
DESCRIPTION: Built in 1924 before movies ”talked”, the Tivoli certainly enjoyed its share of grand popularity. Through the years however, it went through numerous changes in ownership, suffered a long period of gradual decline, and closed in 1994. In 1995 owners of the nearby Blueberry Hill Restaurant bought the theatre and meticulously restored it bringing it back to its 1924 splendor. Marvel at the 29-foot tall marquee, vestibule with its terrazzo floor and ornate ceilings, recessed ceiling domes, proscenium arch, side wall arches, stage, orchestra pit and lush burgundy curtains. The building includes seven specialty shops now features the finest in independent film and foreign language cinema. Listed in the National Register of Historic Places, it is now part of the Landmark Theatres chain.
BOX OFFICE: before showtimes
ADDRESS: 6350 Delmar Blvd, University City, MO MAP
RAPID TRANSIT: Metrolink Delmar Loop Station
PARKING: on street and paid lots
PHONE: 314-995-6270
WEBSITE: http://www.landmarktheatres.com/market/St.Louis/TivoliTheatre.htm

Opera Theatre of Saint Louis
DESCRIPTION: Provides an inventive mix of repertory theatre and apprentice programs surrounded by lawns and gardens. This small theater is an idyllic setting for music on summer evenings. Everyone in the audience can meet the artists in the green-and-white tent after performances.
BOX OFFICE: during normal showtimes
ADDRESS: 130 Edgar Road, Loretto-Hilton Center at Webster University, Webster Groves, MO MAP
RAPID TRANSIT: none
PARKING: on premises $5 per car in Big Bend Lot
PHONE: 314-961-0644
WEBSITE: http://www.opera-stl.org