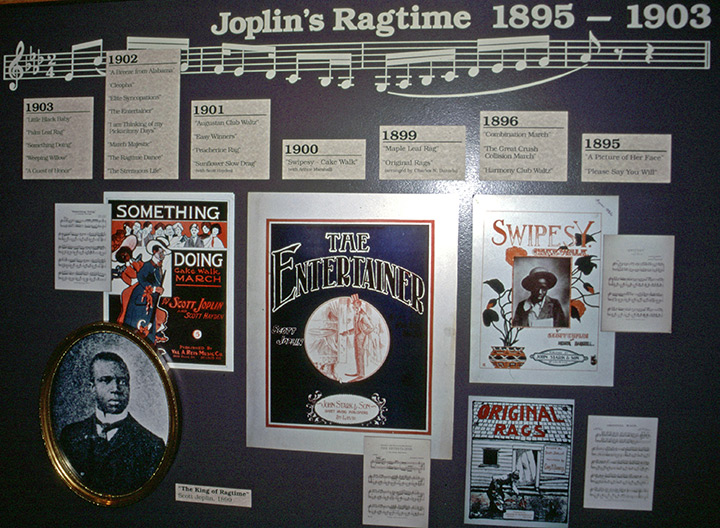 St. Louis is the northern axis of America’s Musical Corridor, which runs along the Mississippi River linking St. Louis, Memphis and New Orleans. Together, this melodic corridor has the enviable history of giving birth to Ragtime, Jazz, Blues, Boogie-Woogie, R&B and Rock ‘n Roll which have made the world listen, sing and dance more than any other musical genres. As a result, few cities outside this corridor are blessed with so many giants of music over the last 100 years.

From the 1880s, Jazz and Blues influences flowed interchangeably on board riverboats between New Orleans, Natchez, Memphis, and St Louis. Around 1900, a classically trained pianist and composer Scott Joplin (1868-1917) created the captivating sound of Ragtime.

Ragtime was an instant hit, representing a unique amalgamation of Scott Joplin’s classical trained pianist background, the new waterfront rhythms infusing St. Louis as more and more musicians migrated here along the Mighty Mississippi and the almost social necessity at that time for carefree danceable music to offset the harsh rigors of daily life.

The up-tempo beat of Ragtime, coupled with the frequent arrival of the riverboats with their musicians, hustlers, drifters, pimps and prostitutes, created a perpetual transient energy that pushed social mores and interaction between the races. As a result, Black musicians on the Mississippi River could make a living playing before mostly white audiences. This atypical transient station in life gave them access to white lifestyles, money, cultural tastes and travel, making them celebrated ambassadors of sorts.

In St. Louis, in part because it was a larger commercial city than Memphis and could provide a wider range of land-based commercial venues for musicians. Scott Joplin and these other musicians found ready audiences in the saloons, theaters, restaurants and bordellos dotted around the Gateway City.

Joplin resided here for several years and became one of the city’s favorite sons, particularly after he composed The Cascades for the 1904 World’s Fair, which earned him a permanent place in music history and in the hearts of St. Louisians. His home has been restored and a Missouri State Historic Landmark.