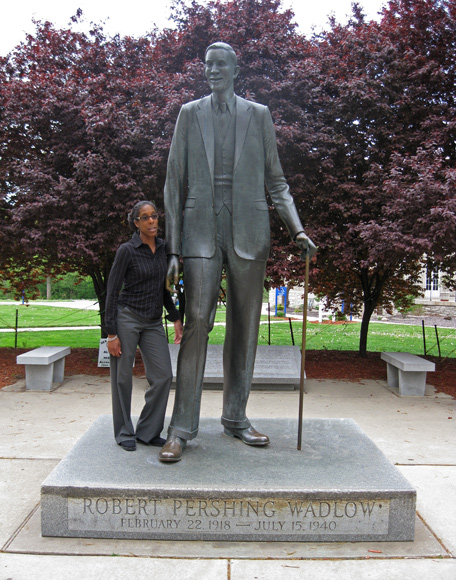 Located just 25 miles north of St. Louis on the banks of the Mississippi River, the city of Alton, Illinois is not only a family getaway destination, it is also a city steeped in a wealth of history. — Lysa Allman-Baldwin

From the stories of the first Native American tribes that settled here, to its historic districts, Confederate prisons, influence by Abraham Lincoln, the Underground Railroad and abolitionist activities, and more, Alton has it all! The history of Alton dates back to the mid-1600s when French explorers Marquette and Joliet navigated the Mississippi River in search of new colonial territory for France. Among their discoveries were numerous Native American tribes including the Illini (the tribe from which the state got its name), the Potawatami, Fox, Big and Little Osage and others.

Some 100 years later, slaves were brought to the area by the French to work the salt and mineral mines. By the early 1800s, Alton had become a hub of activity. At that time, St. Louis area was the furthest west to be discovered. Therefore, it took on its own “Wild Wild West” ambiance with the number of frontiersmen, explorers (including Lewis & Clark), traders, and so forth that came here.

The Civil War was a very tumultuous time in the Alton area, including the imprisonment of numerous Confederate soldiers and following small pox epidemic that threatened much of the town for several years. From about the 1830s to 1860’s, the Underground Railroad, extensive abolitionist attempts and the Lincoln Douglas debates became historical, political and cultural focal points in Alton, Wood River, Godfrey, Elsah, Grafton and Hartford.

Wood River holds the distinction as the home of Standard Oil Company’s newest refinery in 1906. The prospects of work in the refinery, as well as in the community to support those who came here catapulted the population. By 1920, it had become the fastest growing town in the country. To learn more about the town’s legacy and history, which includes the massacre of 1814, the Civil and Revolutionary Wars, the Flood of 1915 and more, be sure to check out the Wood River Museum and Visitor’s Center.

From its name to its attractions, Godfrey, settled in 1817, is a tribute to one of its most prominent citizens–Benjamin Godfrey–a sea captain, shipmaster and merchant trader from Massachusetts. The town was originally called Monticello, and that is what its namesake used when he founded the Monticello Seminary for Women. Today the seminary is called Lewis & Clark Community College, and it is here that you will find The Benjamin Godfrey Memorial Chapel. Listed on the National Register of Historic Places, the chapel is one of only six representing authentic copies of New England architecture outside of the northeastern U.S. Oodles of beautiful nature trails, expansive parkland and the 300-acre John M. Olin Nature Preserve are other town highlights.

The first village in its entirety to be placed on the National Register of Historic Places, Elsah is truly the “village where time stood still.” A boutique enclave that was once an important steamboat landing, Elsah is nestled in the bluffs of the Mississippi River. Strolling through Elsah feels like a true New England adventure with its bounty of multi-hued flora, charming stone cottages, inviting bed & breakfast inns and welcoming people.

Since the village of Grafton sits right at the junction of the Mississippi and Illinois Rivers, it is a true river town, experiencing numerous floods since its founding in 1832. Its position made it very attractive to those traveling along the river so it wasn’t long before loading docks, wharfs and manufacturing companies followed. Despite the floods and commercial entities over the decades, the town and its denizens have managed to survive, nurturing and transforming Grafton into a unique, down-to-earth destination chocked full of water recreational opportunities, boutique specialty shops, wineries, flea markets, antique stores, cafés and restaurants and tranquil lodging options.

Although not located along The Meeting of the Great Rivers National Scenic Byway, two other worthy stops are Jerseyville and Calhoun County.

Dating back to 1834, Jerseyville is a rural community teaming with historical sites and attractions including the Lone Star Schoolhouse, 1866 Fulkerson Mansion and Farm Museum, Cheney Mansion Museum and historic Courthouse Square. The latter features numerous unique Victorian and Gothic architectural style residences and structures, including the Courthouse highlighted by a towering 124-foot dome.

Calhoun County is home to a handful of rural villages, each possessing their own unique history and charm. To get to Calhoun County just hop on the Brussels Ferry and upon arrival, you can tour the villages of Kampsville, Brussels, Hardin, Batchtown, and Hamburg. Together they offer scenic drives, a myriad of plentiful orchards, archaeological digs, hiking trails, acres of prairie and woodlands, festivals and more.

Alton Museum of History and Art
DESCRIPTION: Founded in 1971 and located in Loomis Hall, built in 1832 and still standing as the oldest building in the state of Illinois continuously dedicated to education. It displays and extensive exhibits encompass photographs, clothing, shoes, archival documents, artifacts and other items relative to the history of African American Black pioneers, Lewis & Clark, The Lincoln & Shields Duel, Alton Confederate Prison and other historical events and information. The Wadlow Room is dedicated to the story of Robert Wadlow, the world’s tallest recorded man.
ADDRESS: 2809 College Avenue MAP
PHONE:  618-462-2763
WEBSITE: http://altonmuseum.com

Robert Wadlow Statue
DESCRIPTION: Located across the street from The Alton Museum of History and Art, Robert Wadlow was Alton’s “Gentle Giant” at 8 feet, 11 inches and 490 pounds by the time of his death at the age of 22. His real claim to fame was his friendly, soft-spoken, down-to-earth manner and work as a goodwill ambassador for International Shoe Company, the company that made his size 37 shoes. Next to the statue is a life-sized bronze state and bronze replica of the massive chair he sat in.
ADDRESS: 2800 block of College Avenue MAP

National Great Rivers Museum
DESCRIPTION: An interactive museum that presents the history of the Mississippi from prior to the arrival of settlers and towns until today. What Makes a Great River, Communities: Habitats of the Mississippi, Stairway for Boats, Surf the Watershed and an aquarium are among the numerous exhibits here.
ADDRESS: 2 Lock and Dam Way MAP
PHONE: 877-462-6979
WEBSITE: http://www.meetingoftherivers.org

Alton City Cemetery
DESCRIPTION: An impressive monument to famous abolitionist Elijah P. Lovejoy towers over the city here in full view of the Mississippi River where he, like so many slaves, escaped to freedom. Dedicated in 1897 on the 60th anniversary of his death, the monument is the tallest in Illinois with a spectacular 93-foot high granite column.
ADDRESS: 100A East Broadway MAP
PHONE: 618-462-1617

Enos Apartments
DESCRIPTION: Now privately owned, they are named after Dr. Enos who once had a sanatorium here. In the basement of the building are a series of now closed off Underground Railroad tunnels, which led not only into the building but also to other areas of town. In the open gathering room here, abolitionists met, fed, clothed and provided travel instructions for the slaves once they made it across the river.
ADDRESS: 325 East 3rd Street MAP

Hamilton School
DESCRIPTION: An integrated school founded by Dr. Silas Hamilton and named after a white man who adopted a black boy, naming him George Washington. Washington would later provide an endowment to build a monument to his father, and that monument is believed to be the first one in the country built as a tribute to a white person by a black person.
ADDRESS: 107 East Main Street MAP
PHONE: 618-447-4935
WEBSITE: http://www.HamiltonPrimarySchool.com

Lyman Trumbull House
DESCRIPTION: Built in the early 1800s and now listed on the National Historic Landmark, the home is named after Senator Lyman Trumbull who resided here from 1849 to 1863 (it is now a private home). Trumball chaired the Senate Judiciary Committee and authored or pushed through numerous pieces of legislation relative to race relations in the U.S., including the 13th Amendment to the Constitution and the Civil Rights Act of 1866 in which Congress legalized the abolition of slavery.
ADDRESS: 1105 Henry Street  MAP

New Bethel AME Church
DESCRIPTION: Founded in 1863, it is regarded by some as the oldest and largest Underground Railroad site in the state of Illinois. Founded by freed slaves, the church has survived racially motivated destruction by fire twice and still stands today as an active pillar in the Rock Fork community. Listed as a National Historic Site, it may become part of a proposed project to create Underground Railroad historic interpretive sites and centers.
SUNDAY WORSHIP: 11a
ADDRESS: 2400 Rocky Fork Road  MAP