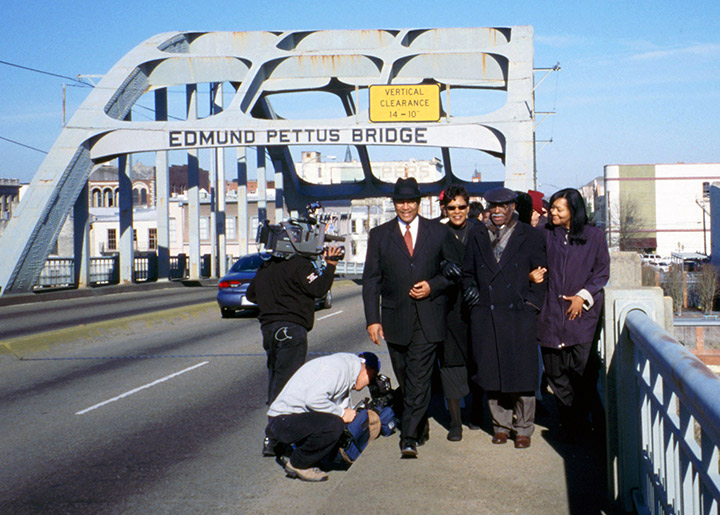 Selma is a day trip from Montgomery. It’s only a 65-mile drive on the Selma to Montgomery Civil Rights Trail.

Selma Attractions
National Voting Rights Museum & Institute
Near the foot of Edmund Pettus Bridge, the museum houses many exhibits about the people and events that brought about voting rights for all Americans, regardless of race, education, or income. It includes exhibits on “Bloody Sunday,” African-Americans in government, and memorials to those who died during the struggle. It hosts the annual Bridge Crossing Jubilee in March. See the historic civil rights sites of Selma and have lunch with a history-maker. The Bed & Breakfast Tour for $100 per night lets you spend the night in the home of a history-maker, then listen to their stories.
ADMISSION: $; Footprints to Freedom Tour costs slightly more but includes lunch
DAYS & HOURS: Tue–Fri 9a–5p; Sat 10a–4p
ADDRESS: 1012 Water Avenue, Selma, AL MAP
PHONE: 334-418-0800
WEBSITE: http://www.nvrmi.org

Brown Chapel AME Church & Martin Luther King, Jr. Memorial Statue
DESCRIPTION: Brown Chapel was organized by freedmen in 1866 after the Civil War. The current edifice by a Black architect A.J. Farley was built in 1908 and is noted for its imposing twin towers and Romanesque Revival exterior. With its proximity to downtown and Edmond Pettus Bridge, this church was the staging ground for the historic Selma to Montgomery Marches of the Civil Rights Movement. Despite a ban on protest marches by Governor George Wallace, the first march led by SCLC’s Hosea Williams and SNCC’s John Lewis took place on 7 March 1965, known as “Bloody Sunday” — 600 civil rights marchers were attacked by state and local police with billy clubs and tear gas 6 blocks away on Edmond Pettus Bridge. John Lewis’s skull was fractured in the melee as many white onlookers cheered. When national TV programming was interrupted that night to showcase the events, the nation’s disapproving eyes finally gazed upon the Selma and other civil rights marches. The second march took place on 9 March 1965 but was halted at the bridge for fear of death — even though national news cameras were there; on 21 March 1965, after Governor Wallace’s ban was overruled by Federal Judge Frank M. Johnson Jr., only the third march led by Dr. King, Ralph Abernathy, Hosea Williams, John Lewis, interfaith ministers and a host of celebrities and made it to Montgomery, 51 miles away 5 days later. As the meeting place and office of the Southern Christian Leadership Conference during the Selma Movement, the church played a major role in leading to the adoption of the Voting Rights Act of August 1965. A monument to Dr. Martin Luther King, Jr. was dedicated in front of the chapel in 1979.
DAYS & HOURS: tours by appt only.
ADDRESS: 410 Martin Luther King Street, Selma, AL MAP
PHONE: 334-874-7897

Tabernacle Baptist Church
DESCRIPTION: Established in 1894, this church was the site of the first mass meeting on voting rights in 1964 hosted by Rev. L. L. Anderson, when others were afraid to do so; prior to 1st mass meeting, this was the site of training for non-violent protests; Dr. Martin Luther King, Jr. and James Baldwin also spoke here
ADDRESS: 1431 Broad Street, Selma, AL MAP
PHONE: 334-874-5443

Edmund Pettus Bridge and Civil Rights Memorial Park
DESCRIPTION: Named after Edmund Winston Pettus, a Confederate general and U.S. senator from this city. The bridge is famous during the Voting Rights March from Selma to Montgomery where marchers were violently attacked by Alabama state troopers at the foot of the bridge on 7 March 1965. That day is known as “Bloody Sunday.” On Sunday 21 March 1965, Dr. Martin Luther King, Jr. led 600 marchers across this bridge, by the time it successfully concluded in Montgomery, the numbers swelled to 25,000, whom Dr. King addressed from the steps of the Alabama State Capitol. The memorial park includes murals, memorials, and a walking path to commemorate the struggle for voting and civil rights.
ADDRESS: Broad Street at Water Avenue, Selma, AL MAP

Old City Hall
DESCRIPTION: Served as a city and county jail in which Dr. Martin Luther King, Jr. and other protestors were jailed in 1965.
ADDRESS: 1300 Alabama Avenue, Selma, AL MAP

St. James Hotel
DESCRIPTION: From 1825 to 1893, this hotel was run by a slave, Benjamin S. Turner. He took over the hotel for his owner, who had gone to become a doctor in the Civil War. Benjamin Turner eventually became the county’s first African American tax collector, one of Selma’s first black city councilmen, and the first African American to represent Alabama in the U.S. Congress. Today, it is Selma’s only full-service hotel and has been restored to its former grandeur. It’s within walking distance of Selma’s historic sites.
ADDRESS: 1200 Water Avenue, Selma, AL MAP
PHONE: 334-872-3234
WEBSITE: http://www.stjameshotelselma.com
PHONE: 334-875-1850

Selma to Montgomery Voting Rights Trail
DESCRIPTION: On 12 November 1996, the US Congress established the Selma to Montgomery National Historic Trail to commemorate the 5-day, 54-mile march for voting rights. The trail starts at Brown Chapel AME Church in Selma and travels the route across Edmund Pettus Bridge, along Highway 80, and to the Alabama State Capitol in Montgomery. Jimmie Lee Jackson was shot while trying to protect his mother and grandfather from state troopers during a 1965 voting rights protest in Marion, Alabama. His death sparked the Selma to Montgomery Marches. Along the way, stop at the memorial to Viola Liuzzo, a white housewife from Michigan who was killed by Klansmen while transporting Selma to Montgomery voting rights marchers. At the steps of the Alabama State Capitol, where Dr. King delivered one of his greatest speeches, “How Long, Not Long.” The march attracted so much attention because many white Hollywood movie stars and entertainers participated in the concluding Stars for Freedom Rally.
WEBSITE: http://www.civilrightstrail.com