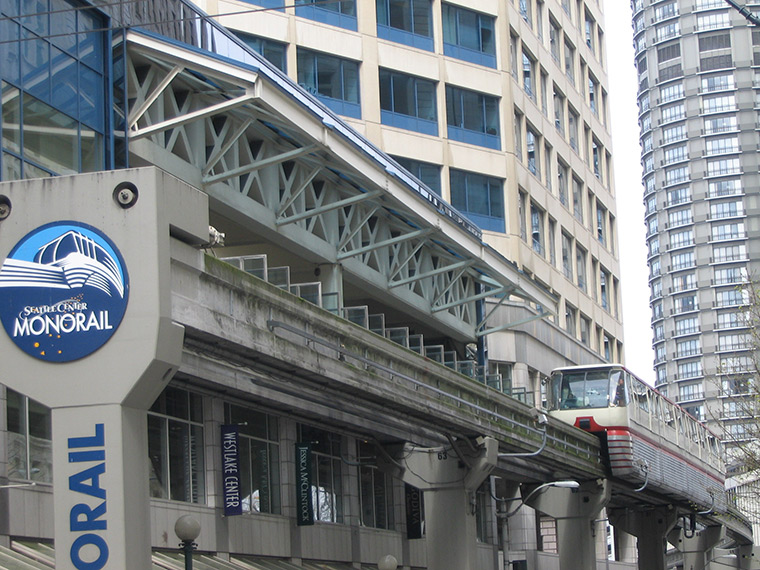 Seattle-Tacoma International Airport (SEA) is a large airport that boasts the longest non-stop in America, Seattle to Miami. After a confusing history of additions, SEA Airport (locals call it “Sea-Tac”) Master Plan finally makes sense for travelers. Runways have been tweaked to handle more flights across North America and to Asia, while mitigating noise over nearby homes. Over 3200 spaces in the parking garage became available when car rentals were moved north of the terminal. Passenger amenities are inviting in the airy Central Terminal anchoring 4 concourses, WiFi, dining, shops, a business conference center and a massively large window to view flights. The North and South Terminals, attached to Central Terminal, are smaller with fewer passenger amenities, but also have satellite gates. June-August is the busiest time for SEA Airport, with 100,000 passenger per day. SEA AIRPORT TERMINAL MAP

Central Link light rail travels from SEA Airport Station to Downtown Seattle and U. of Washington. Catch Shuttle Express in the parking garage to downtown for about $35 or Airport Express (800-544-0739) for $10 to downtown hotels. Both shuttles depart SEA Airport every 20 minutes from 4:30a-11:10p, reservations are not required.

All taxis must charge a Flat Rate for trips from the downtown Seattle Hotel District to SEA Airport. There is NO flat rate from SEA Airport to Downtown Seattle. Call Yellow Cab (206-622-6500), Orange Cab (206-522-8800) or Farwest Taxi (206-622-1717). Car Rentals: A shuttle bus transports you to the rental facility northwest of the terminal for Alamo, Avis, Budget, Hertz, Dollar, Enterprise and National pick-up centers. Though you are only 11 miles from downtown, trips there via I-5 Freeway take 25-50 minutes, depending on commute hour.

Vancouver-Seattle-Portland-Eugene is a 466-mile Canadian and U.S. High Speed Rail Corridor designated for federal funding. Each year, more miles of track are being upgraded and road seperations are being added for faster speed. For more context on this important subject, see Interstate High Speed Rail.

Seattle Central Link light rail runs north-south and operates every 7-15 minutes on Weekdays and 10-15 minutes on Weekends from 5a-Midnight. Central Link has a fair number of tunnels and aerials with road level sections for about 20 mph from SEA Airport to Downtown at Westlake Station. Central Link also goes north of downtown to U. of Washington. Day fares are available. There are reduced fares for youth and seniors, kids under 6 ride Free. The system is expanding further north and east by 2023. CENTRAL LINK SYSTEM MAP

Sounder commuter rail is a regional service operating from Everett to Seattle to Tacoma with several stops in between. Fares begin at $2 and vary depending on length of trip. Sounder trains feature WiFi service and run on track shared with Amtrak. SOUNDER SYSTEM MAP

Seattle Monorail
Like the monorail at Disneyland built on a long string of concrete posts, this ride is more efficient than beautiful over its 1.2-mile course; the 90-second ride has only two stops — north downtown and Seattle Center. You can count on long lines from Westlake Center to Seattle Center. Rides depart every 15 minutes MAP and Seattle Center MAP
ADMISSION: see pricing matrix on website
DAYS & HOURS: daily
WEBSITE: http://www.seattlemonorail.com

Seattle Streetcar
The Streetcar starter line connects to the region’s light rail system at Westlake Station and proceeds on a 1.5 mile route. The streetcar system is growing north, east and northwest.
WEBSITE: http://www.seattlestreetcar.org

Tacoma Link is a short light rail that provides a great way for tourists to get around downtown Tacoma — its Free. Daily service runs every 12-24 minutes, 5:30a-9a. TACOMA LINK ROUTE MAP 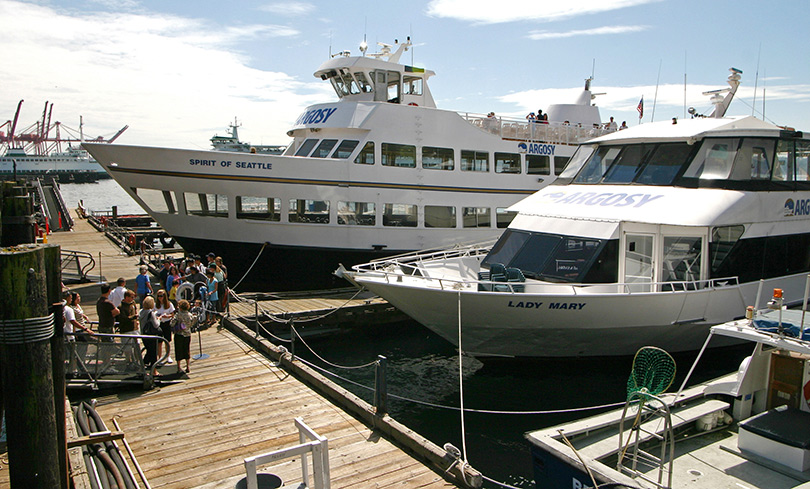 Seattle Waterfront
Seattle’s waterfront overlooks deep-water harbor, Elliott Bay. The bay teems with trade, ferry boats, cruise liners, sightseeing tour boats and pleasure craft – the views are astounding from all; you can overlook the harbor from the Pike Place Market. Bell Street Cruise Terminal at Pier 48 is homeport for luxury cruise liners bound for Alaska’s Inside Passage. Departing from Pier 55, Tillicum Village offers a scenic boat trip to nearby Blake Island for a Northwest Coast Native American stage show. The Seattle Waterfront also features souvenir and gift shops and an array of Northwest seafood.
ADDRESS: Alaskan Way from Pier 70 on the north and Pier 48 on the south

Elliott Bay Water Taxi
Along the trolley route in summer months you can catch a water taxi from Piers 54 and 66 to Seacrest Park; the ride gives a spectacular view of the downtown skyline and West Seattle; small fee. It runs daily in the warm months.
WEBSITE: transit.metrokc.gov/tops/oto/water_taxi.html

Washington State Ferry
The nation’s largest and finest ferry system is so well used, it is often overtaxed on weekends and fair-weather days. In addition to ferries running throughout Puget Sound, this ferry system is known for delightful and relatively inexpensive trips to Victoria and Vancouver, Canada. If you take a car with you, the wait to board may take longer to board the vessel than the trip time. Knowledgeable passengers remember their passport and board the ferry by foot. Use other ground transportation when you arrive in Vancouver. Schedules are less frequent in the winter and fees vary by distance – cash only.
ADDRESS: piers 52 and 48 adjacent to Downtown and Pioneer Square
PHONE: 800-843-3779
WEBSITE: Link

Seattle-Tacoma Freeway System serves every major community west of Puget Sound and it shows. I-5 Freeway from Sea-Tac Airport to U. of Washington is one of the nation’s most congested commutes. Car pool lanes, metered entrances have been added to help traffic flow in this growing region. State Route 520 bridge across Lake Washington features automated toll collection. Rental cars may be assessed a steep service fee by the rental company, in addition to the automated toll, so be sure to ask first or avoid this bridge.