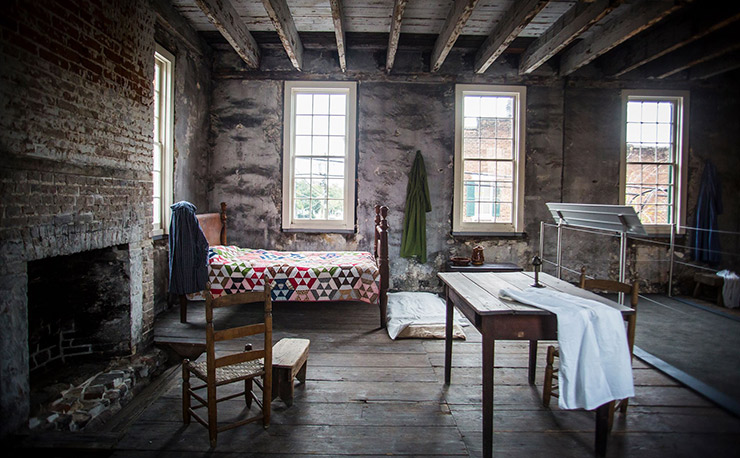 Founded in 1733 by British General James Oglethorpe, who landed on a bluff above the Savannah River, Savannah was the capital of the last British colony in North America, called “Georgia.” Savannah was considered a southern outpost by the British to protect their northern colony based in Charleston from Spanish intrusion upwards from Florida. Great Britain also hoped that Georgia would become a silk and wine export colony. Some Native Americans, namely the Yamacraw, were friendly towards the settlers. Others were mortal enemies. Either way they gradually relocated from settlement areas over several decades of peaceful trading, broken treaties and war defending their land against the Europeans.

What is most remarkable to African Americans is that Savannah was founded as a city where slavery was forbidden. That lasted until Georgia law changed in 1750 when the economic attractiveness of slavery became too much to resist. Savannah practiced modest forms of slavery until 1779, when Americans in the Revolutionary War captured it. Prior to that date, slave-owners gave nominal freedoms to their slaves, allowing many of them to live on their own, pay their owners a stipulated weekly fee and work for extra money of their own. These forms of slavery were more akin to indentured servitude. Author-historian, Whittington B. Johnson in his book Black Savannah called it “Nominal Slavery”.

While nominal slavery in the city varied by master, the economics and inter-relationships of plantation slavery went into overdrive after the invention of the cotton gin credited to Eli Whitney of Savannah in 1793. We say credited because some historians contend that one of his slaves invented the machine. It was common for slave-owners to claim the inventions of their slaves. With that invention, cotton became the primary industry of the Deep South and Savannah joined New Orleans, Mobile and Charleston as the nation’s biggest exporters of cotton. Slave-owners cracked down on plantation slaves to extract as much money from cotton, production as possible, though fortunes in rice and indigo production were made as well. African slaves who brought the difficult art of rice cultivation to these shores did not enjoy those fortunes.

Bowing to slave-owner interests, the Georgia Legislature enacted laws to crack down on slave rights, prohibit emancipation, and restrict the rights of free persons of color. All of those laws ensured the care and feeding of the cotton industry. Even newly freed slaves were subject to being resold into slavery. The rights of free persons of color were also trampled upon. Several black ministers, including Andrew Bryan, were humiliated with public whippings to ensure that they kept slaves in their congregations “in their place”. Savannah’s fine public works projects exploited the labor of slaves temporarily incarcerated by their owners, free persons of color and European Americans who had the misfortune of being incarcerated. The fruits of their work are readily visible downtown and on the cobblestone streets of the waterfront.

African Americans had much to fear in Savannah if they pursued an education. In 1817, the Savannah City Council passed an ordinance forbidding the teaching of free or enslaved African Americans. One African American, James Simms, was publicly whipped for operating a school. In a stunning triumph of the human spirit to overcome these obstacles, some people still managed to thrive. One of those persons was William J. Claghorn, a free black businessman who owned a popular bakery in 1855. African Americans would meet at his store, hold church and learn to read.

By 1860, African Americans in Savannah, New Orleans, Mobile and Charleston were overwhelmingly Mulatto. To be darker was to have a more difficult life. That fact plus mind manipulation practices by slave holders cultivated colorism to such an extent that it was more important in choosing whom to marry than whether a person was free or a slave, wealthy or poor. Savannah’s mixed bag of nearby plantation slavery, nominal slavery, African Americans owning slaves and property, colorism, faux aristocracy, and public exploit of jail labor led to complex, mixed feelings about the Civil War. Though the majority of black folk were happy about the war’s outcome, several prominent African Americans were not thrilled about Union forces occupying their property and freeing their slaves.

When the Civil War ended, there were only 700 free persons of color and 14,000 newly freed slaves in Savannah. General William T. Sherman of the Union army issued Special Field Order 15 to reserve the Sea Islands of coastal South Carolina, Florida, and Georgia for newly freed people of color to own. Most European Americans reluctantly accepted the abolition of slavery with some resistance. An example of resistance was demonstrated after Richard White, a Black Republican, was elected clerk of the Superior Court of Chatham County, which contains Savannah in 1868. Some European Americans brought false up charges of larceny against Richard White. Dr. J.J. Waring, a European American physician, bailed Mr. White out. For his kind act Dr. Waring was expelled from the Georgia Medical Society, which charged that he forfeited his position as a “Gentleman in the Society” by associating with a person of color.

Savannah was also the home of Bishop Henry McNeal Turner, the first Black Chaplain of the U.S. Army. He served as pastor of St. Phillips A.M.E. Church in Savannah (now known at St. Philip Monumental A.M.E. Church) from 1870-1874. And during the reconstruction era, there were many advances in the city. But then local and state Black Codes were introduced, creating the foundation for Jim Crow apartheid in the city and the nation. These laws did not stop all African Americans from progressing.

Black businesses could be seen all along West Broad Street, which contained banks, stores, restaurants, and nightclubs. This area of town was once referred to as another Black Wall Street in America because of the number of banks located on it. Like all other American cities the Civil Rights Movement touched Savannah for the better. African Americans in the city fought Jim Crow, as demonstrations were lead by the Southern Christian Leadership Conference. Today, Savannah has had a black mayor, you can live anywhere you can afford, and racial relations in this visual candy store of a city are mostly upbeat. Last and surprisingly, for such a small town you can still get your swerve on with the nightlife.