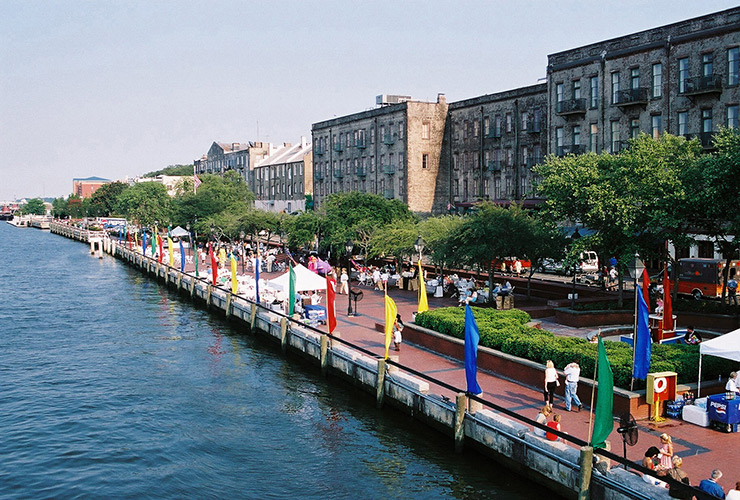 River Street
DESCRIPTION: Located in the nation’s largest Registered Urban Historic Landmark District, River Street next to the waterfront is the oldest destination and quite charming in its own right. Today it is home to restaurants, bars, gift shops, galleries and boutiques. A charming vintage street carruns its length next to the waterfront and it is accented with shade cover trees, benches and as you would expect, the best views of Savannah River. Its packed during the annual St. Patrick’s Day Festival.
ADMISSION: Free
DAYS & HOURS: daily
ADDRESS: River Street from MLK to Randolph Street, Savannah, GA MAP
PARKING: on street and nearby paid lots
PHONE: varies by merchant
WEBSITE: http://www.riverstreetsavannah.com

Squares of Savannah
DESCRIPTION: Designed at the founding of Savannah, the city was blessed with two dozen square-block photogenic parks, each over 260 years of age. All the National Landmark squares measure 200 feet from north to south, but they vary east to west from approximately 100 to 300 feet. Each square is intersected north-south and east-west by wide, two-way streets. They are bounded to the west and east by the south- and north-bound lanes of the intersecting north-south street, and to the north and south by smaller one-way streets running east-to-west and west-to-east, respectively. As a result, traffic flows counterclockwise around the squares like traffic circles. Most squares are named in honor or in memory of a person, persons or historical event, and many contain monuments, markers, memorials, statues, plaques, and other tributes. Favorite squares are along Bryan Street and State Street where you they are surrounded by historically restored mansions. Unfortunately 2 of the original squares have been lost to development.
ADDRESS: Bull Street, Bryan Street, Abercorn Street & State Street, Savannah, GA MAP

Forsyth Park
DESCRIPTION: Forsyth was the first large park created in Savannah and was influenced by the urban renewal of Paris in the nineteenth century, when broad boulevards and parks were created. The success of Forsyth Park greatly influenced city planning throughout the United States, as more cities sought to develop large parks by the 1850s. Today as the main park of Savannah, it frequently hosts concerts and festivals. Even without big events, the park is full of joggers, srtrollers, dramatic sculptures, a picturesque fountain and so many unique characters you could fill a book — actually, sometone already has. No wonder bed & breakfasts and boutique hotels love to circle around it.
ADDRESS: Drayton Street, Park Ave, Whitaker Street & Gaston Street, Savannah, GA MAP

Factors Walk
DESCRIPTION: Today it consists of shops, attractions, a museum, restaurants, a few bars and a hotel A network of buildings to the bluff connected by iron and concrete walkways. In 1817, it was the original site for the Cotton Exchange; the first two floors were for the cotton coming into port, the third floor was used for storage, and the fourth and fifth floors were offices. The alleys and walkways connecting these buildings were later called Factors Walk because the men who worked with the cotton exchange were called “factors” because they factored how much cotton was brought in to be sold in this center of commercial activity.
ADMISSION: Free
DAYS & HOURS: reopening soon to the public
ADDRESS: On the shore side of River Street, Savannah, GA MAP
PARKING: on street and paid lots
PHONE: varies by merchant

City Market
DESCRIPTION: One of the most colorful and historic fresh seafood and produce markets in the country. It is a mixed use rehabilitation of the four block historic area began in 1985. The result is an attraction that economically could not be replicated today, yet be a vibrant destination for entertainment, dining, and retailing place that attracts both tourists and residents. It includes the Art Center at City Market, which is 19,000 square feet of working studios for artists. As you would expect, its a frequent setting for events day or night.
ADMISSION: Free
DAYS & HOURS: dawn-night
ADDRESS: 219 West Bryan Street, Savannah, GA MAP
PARKING: on street
PHONE: 912-232-4903
WEBSITE: http://www.savannahcitymarket.com

Roundhouse Railroad Museum
DESCRIPTION: A delight for train lovers, the property for this museum was first constructed by the Central of Georgia Railway beginning in 1845; thirteen original structures still stand; included in these structures are the massive Roundhouse, the train turntable, and the 125-foot tall smokestack — a National Historic Landmark. By the 1960s, the building was nearly demolished, by the early 1960s; twelve heroic Savannahians saved the complex from demolition later that decade, enabling a series of restoration projects to follow.
ADMISSION: $5 adults
DAYS & HOURS: daily 9a-5p
ADDRESS: 601 West Harris Street&, Savannah, GA MAP
PARKING: on premises
PHONE: 912-651-6823
WEBSITE: http://www.chsgeorgia.org/roundhouse

Ships of the Sea Maritime Museum
DESCRIPTION: The museum was founded in 1966 to exhibit ship models, paintings and maritime antiques of Atlantic trade and travel between England and America during the 18th and 19th centuries; the collection is housed in the elegant home built for William Scarbrough, president of the Savannah Steamship Company and for nearly 90 years, it was the West Broad Street School, one of the first public schools for African American children in the city; the Museum Garden has become a delightful oasis to sit and meditate. The gift shop is sure to pique the interest of model lovers.
ADMISSION: $8 Adults, $6 Students and Age 65+, Age 5 and under enter Free
DAYS & HOURS: Tue-Sun 10a-5p
ADDRESS: 41 Martin Luther King, Jr. Blvd, Savannah, GA MAP
PARKING: on premises and street
PHONE: 912-232-1511
WEBSITE: http://www.shipsofthesea.org

Bull Street
DESCRIPTION: One of Savannah’s prime historic districts and a perfect piece of eye-candy filled with landmarks. City Hall (1901), which replaced a 1799 City Exchange building housing City government. U.S. Customs House (1852) on the site of the Georgia colony’s first public building. Christ Episcopal Church (1838) on the site of the colony’s first church built in 1733. The immaculate landscape architecture of the street ensures that you pass Johnson Square, the first square laid out in the new planned town, as well as Wright Square, Chippewa Square, Madison Square, Monterey Square, Savannah College of Art & Design, dozens of galleries and antique shops along the oak filled-moss covered way. This street appeared in the popular movies Forrest Gump and Midnight in the Garden of Good & Evil
ADMISSION: Free
DAYS & HOURS: daily
ADDRESS: Bull Street from Bay Street to Forsyth Park, Savannah, GA MAP
PARKING: on street

Fort Pulaski National Monument
DESCRIPTION: A Civil Way fort and site of many battles is now home to a National Monument that offers daily interpretive programs including guided tours and musket firings. Expanded living history programs, including hourly cannon demonstrations, are held each Saturday. 25 million bricks were used to construct Fort Pulaski. Many of the bricks, known as Savannah Gray, were handmade at the Hermitage Plantation on the Savannah River.
ADDRESS: Fort Pulaski, Savannah, GA MAP
WEBSITE: http://www.nps.gov/fopu