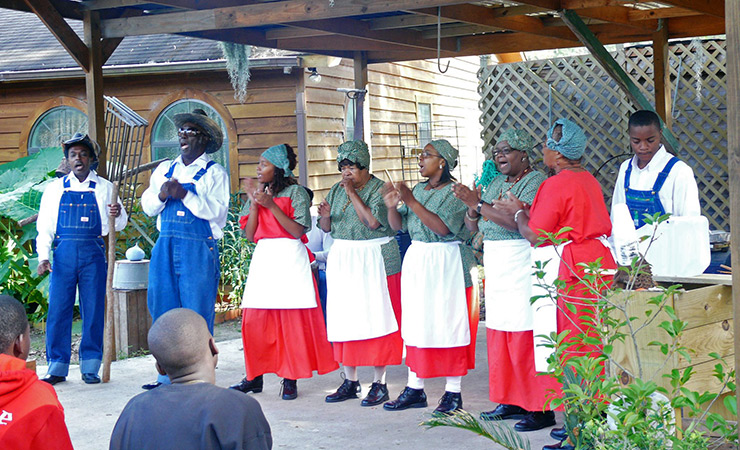 Ralph Mark Gilbert Civil Rights Museum
DESCRIPTION: Its mission is to educate the public on Savannah’s rich African-American heritage from the earliest years until today. Dr Ralph Mark Gilbert was a famous orator, pastor of First African Baptist Church, playwright of religious dramas and founded the local NAACP chapter to earn his stripes as a Civil rights Movement veteran. The papers and memorabilia of museum’s namesake, as well as a sequence of 15 areas that re-create the profound impact of the Civil Right Movement in Savannah are on display. The building was erected in 1914 as the Wage Earners Savings and Loan Bank for Black Savannahians – the largest Black bank in the country at the time.
ADMISSION: small fee
DAYS & HOURS: Mon-Sat 9a-5p
ADDRESS: 460 Martin Luther King, Jr. Blvd, Savannah, GA MAP
PHONE: 912-231-8900
WEBSITE: http://www.savcivilrights.com

African American Families Monument
DESCRIPTION: Inspired by the vision of Dr. Abigail Jordan and backed by the Consortium of Doctors (Black women physicians, college administrators, and PhDs) who contributed time and funds to this 11-year project. A larger-than-life bronze statue of a four-member nuclear family sits atop a granite base inscribed with the words of poet Maya Angelou. Sculpted by Savannah College of Art and Design professor Dorothy Spradley, the monument honors African American families and the strength that bore them through slavery to freedom.
ADDRESS: Hyatt Hotel on River Street, Savannah, GA MAP
WEBSITE: http://www.consortiumofdoctors.com/monument.html

Haitians Aiding U.S. Revolutionary War Monument
DESCRIPTION: In 2007, this monument was dedicated to unsung contributors to American independence, Haitian soldiers who fought in the Revolutionary War’s battle for Savannah. In 1779, 545 free Haitians volunteered to help American colonists and French troops in an unsuccessful battle to drive the British from coastal Georgia. More than 300 allied soldiers were gunned down charging British fortifications. This battle is a point of national pride for Haitians because solders like Henri Christophe, who later became King of Haiti, developed the confidence to fight for their own independence from France in 1804. The monument is located in Battlefield Park Heritage Center.
ADDRESS: 303 Martin Luther King Blvd, Savannah, GA MAP

Pin Point Heritage Museum
DESCRIPTION: In 1985, the A.S. Varn & Son oyster and crab factory in Pin Point closed, marking the end of an era for the tiny fishing community on the banks of the Moon River, south of Savannah. For nearly one hundred years, Pin Point was a Gullah/Geechee enclave founded by first-generation freedmen where family, religion and work were deeply connected to the water. Today, the factory has been reopened as a museum celebrating the life, work and history of this Gullah/Geechee community.
ADDRESS: call for directions
DAYS & HOURS: by group appointment
PHONE: Lisa Porte at 912-232-3945