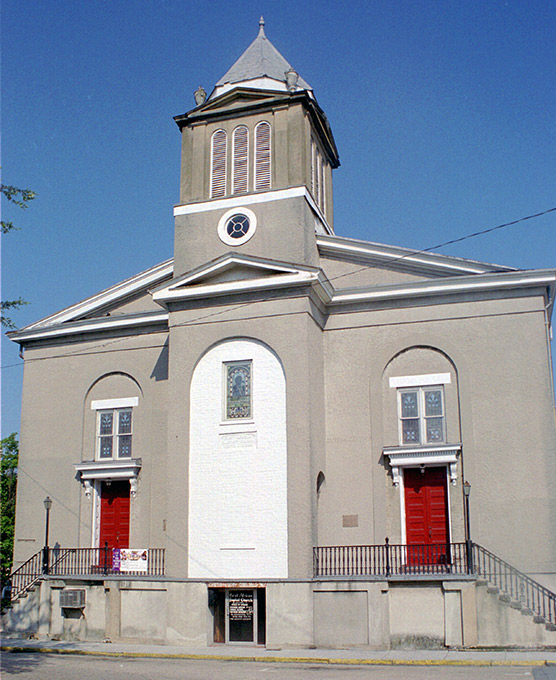 In 1773 Rev. George Liele, a Negro Missionary, was permitted to hold religious services on a church plantation in greater Savannah. Though informal and without a proper edifice at the time, it ultimately became first Baptist congregation where both enslaved and free persons of color attended. Traditional white Baptist ministers preached, but did not practice true Christianity with their fellow man, so integrating their church as an equal citizen was out of the question.

Savannah was controlled by the British when a little event called the Revolutionary War started in 1776. Thousands of escaped slaves joined the British, since only the British promised an end to slavery if they won and freedom to escaped slaves who fought with them, if they lost. Thus the Revolutionary War raised aspirations for Southern slaves because of the possibility of freedom AND the promise that many could have a church edifice of their own.

In 1783, as the war drew to an end in favor of Americans, Rev. Liele exited stage left, since he sided with the British. Hence, the congregation gravely doubted that Savannah would be able to form a Colored church. So before leaving, Rev. Liele baptized and trained one slave named Andrew Bryan to become a preacher.

His slave-owner, Johnathan Bryan, permitted Andrew Bryan to preach on his Brampton Plantation. To his credit Johnathan Bryan withstood criticism from other white slave-owners for doing so. Johnathan Bryan’s rational was that slaves more focused on the afterlife were happier in servitude during this life and that religious leadership by “friendly” Blacks was also a way to promote morality, sobriety and productivity. In time, most slave-owners came to accept this practice as safe in Savannah.

By 1788, Rev. Abraham Marshall (White) and Rev. Jesse Peter (Colored) baptized Andrew Bryan and certified the congregation at the Brampton barn as the Ethiopian Church of Jesus Christ. Without an edifice, Rev. Andrew Bryan moved his congregation from place to place in Savannah.

Secretly planned slave revolts in Virginia, New Orleans and Charleston between 1800-1811 held severe consequences for Rev. Bryan and anyone else who preached to slaves. Rev. Bryan was whipped and imprisoned by whites who feared his church gatherings could lead to slave revolts. Like the apostles of Christ, Rev. Bryan persevered. Before his death in 1812, Rev. Bryan bought freedom for himself and his family, built an edifice, and the congregation became known as the First Colored Church. In 1822, the name was changed to First African Baptist Church. Not only the oldest surviving Black Baptist congregation in America, the church also formed the first Black Sunday School in 1826.

First Bryan Baptist Church was founded in Savannah in 1794 on the oldest property owned by and used as a church by African Americans. Second African Baptist was founded in 1802 with Henry Cunningham as pastor. As the Black working poor and middleclass grew, their interest in religious service bifurcated. Some preferred attending mixed churches with European American pastors. Others came to prefer the Black pastors of First or Second African Baptist. These two foundational churches are historically important for trained more Black preachers than any other early churches.