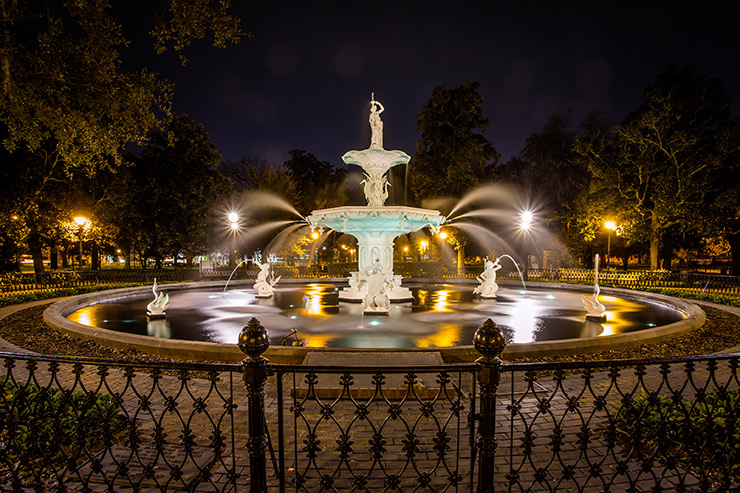 Unlike England, where so many of its city designs evolved from cow paths, Savannah was meticulously laid out as 60 feet by 90 feet square blocks in a repeating sequence extending from the Savannah River inland. Called the “Square Plan” in England, this landscape design included space for public buildings and square-like parks spaced two blocks apart. This Square Plan is something the British always wanted to do, but could never find the right place to execute, until Savannah. Not even Charleston follows such a plan.

Buildings did not exceed five stories in height and most were laid out in Victorian or Regency style and remain that way with one notable hotel exception. Thus, people-friendly urban form and exquisitely detailed architecture made Savannah a masterpiece of urban design. The next challenge — how to preserve it.

Given the legacy of the Square Plan, Savannah’s role in the Revolutionary War outpost, cotton export center, and as a Civil War outpost, historical preservation gained an early foothold here. And unlike rag-tag Atlanta, which the Union General Sherman burned to the ground during the Civil War, the general saved Savannah to offer as a gift to President Lincoln. Thus, General Sherman was the first preservationist of Savannah. Another unintentional preservationist was the economy. It tanked after the Civil War and pretty much got by on life support until the 1940’s. Had Savannah’s economy grown like the old waterfront cities of Norfolk and Baltimore, there would have been pressure to tear down smaller masonry buildings. The many squares like Forsyth Park also played a preservation role.

In the latter half of the 20th century, civic leaders ensured that the waterfront promenade was carefully built to blend in with the cobblestone entrance of riverfront buildings. There are a some tall buildings today, but only a handful. Through superb urban planning, avoidance of a massive hurricane, fortune and misfortune, Savannah is widely renowned for its role in American history. This little city raised urban landscape design and historic renovation to a fine art.