Soul Of America > US Cities > Savannah 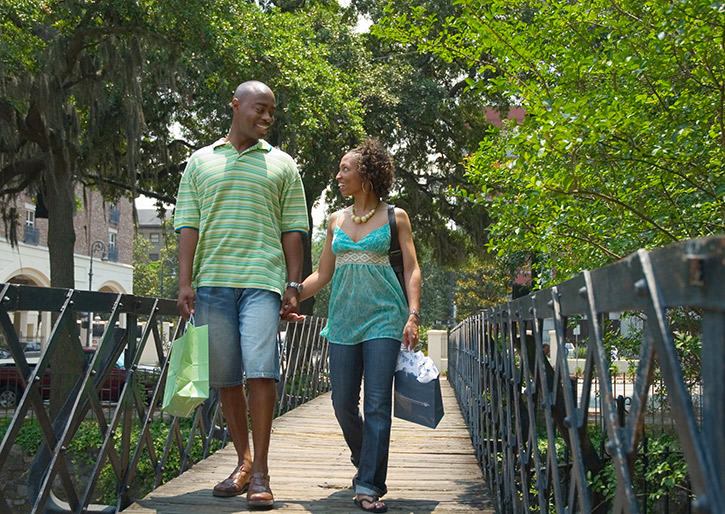 History
Remarkably, it was founded in 1733 as a city where slavery was forbidden. That however, only lasted until Georgia law changed in 1750 as the sinful attractiveness of slavery became irresistable to … More

Restaurants
Savannah is a Soul Food and Barbeque town where most of the good dining is had by personal invite to people’s homes. But it also has a few Low Country and Creole restaurants … More

The First Black Baptist Church
In 1773, Rev. George Liele, was permitted to hold a religious services on a church plantation. It became First African Baptist congregation, though it did not have a proper edifice. Enslaved and Free persons of color attended … More

A Unique Landscape Design
Unlike England, where so many of its city designs evolved from cow paths, Savannah was meticulously laid out as 60 feet by 90 feet square blocks in a repeating sequence extending from the Savannah River inland. It makes liberal use of gates designed by black craftsmen too … More

General Attractions
In the nation’s largest Registered Urban Historic Landmark District, River Street next to the waterfront is the oldest; today it is home to restaurants, bars, gift shops, galleries and boutiques … More

Arts
Savannah History Museum housed in the Central of Georgia Railway terminal, built in the 1850s and in use until 1972, today serves as Savannah Visitors Center … More

Trivia and Famous Residents
Savannah has a historical cast of characters that could fill a novel. Some of them, at least composites of them, has filled a Hollywood movie … More