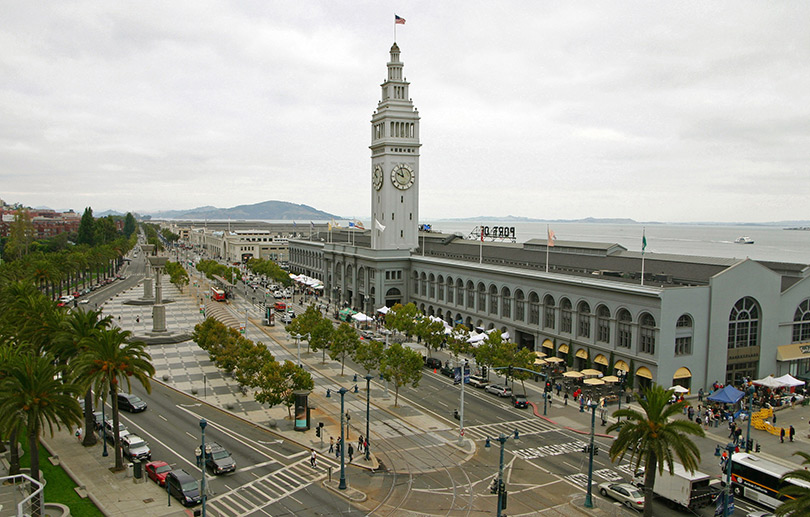 The Embarcadero, Spanish for “The place to embark”, is the waterfront and main transportation corridor on the northeast coast of San Francisco. This marvelous attraction beginning at Fisherman’s Wharf, rivals the Champs Elysees of Paris in popularity. Things were not always peachy. At times it was scary for a single woman to be on parts of The Embarcadero. This Jekyll & Hyde legacy stems from changing public values towards different transportation modes, causing The Embarcadero to peak in popularity, race to obscurity and then Phoenix-like, rise again over 160 years.

When the city was young, many sections of today’s Embarcadero were under water. During the 1849 Gold Rush, fortune seekers sailed around the tip of South America, then up the Pacific Coast to San Francisco. Some crews were so excited, they stranded ships to rot on the irregular-shaped, mudflat shoreline. Fortune-seekers stocked up on local supplies, then boarded ferries or trains traveling to Sacramento — closer to Gold Country. By the 1860s, people figured out that only suppliers, ferries, railroads and their bankers were getting rich. Newcomer traffic slowed. Amidst the devil-may care attitude, San Francisco became a big city with a bawdy reputation. Gun and knife fights were common.

One way San Francisco helped curb its red-light Barbary Coast reputation, was public works projects, including the funding of a seawall to infill the mudflats with a road and railway that became The Embarcadero. In that manner, San Francisco’s shipping and freight business could prosper in an orderly manner, next to the growing Financial District. 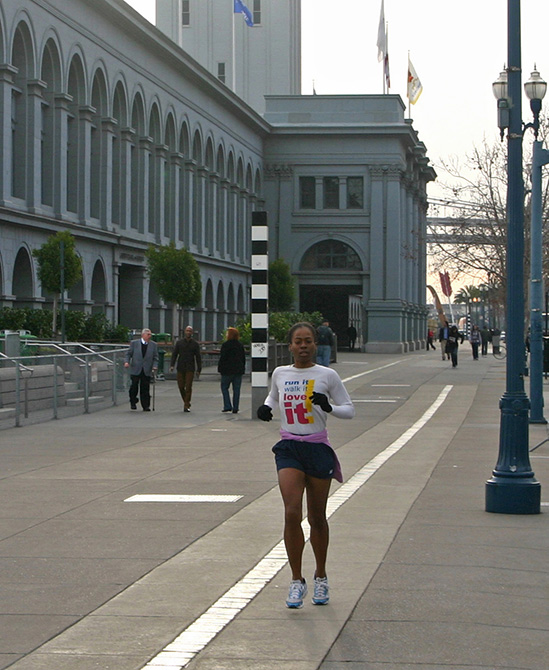 Jogging on The Embarcadero, San Francisco

It took over fifty years to complete the the curvy-shaped Embarcadero, and each year was complimented by the growth of freight and passenger rail southbound towards the San Francisco Peninsula. Though populations grew in the East Bay, North Bay and Sacramento, most jobs and entertainment remained in San Francisco. So demand grew to better organize passenger transportation between San Francisco and those communities. Initially, passenger ships docked at Pier 1, 1 1/2, 3 and 5, where the Delta Queen riverboat and others ferried passengers between San Francisco, Oakland, Sausalito, Tiburon, Petaluma, Hayward and Sacramento.

Even the great 1906 Earthquake could not diminish Ferry Building, San Francisco Municipal Railway (“Muni”) or Key System popularity. As late as 1935, the streetcar loop in front of the Ferry Building was one of the busiest commuter areas in the world. Few realized the consequences of big transportation changes next year.

When San Francisco-Oakland Bridge opened in 1936, it carried autos on its upper deck, plus trucks and Key System streetcars on its lower deck. Given the speed advantage of autos and streetcars, ferry ridership quickly declined. And from 1941-45 during World War II, The Embarcadero became a military logistics center for troops, equipment and supplies fighting in the Pacific. Naval vessels tied up all but the shallow waters of Fisherman’s Wharf on the Embarcadero, wiping out most other business activity and nearly the Ferry Building. Though freight rail made a comeback after the war, its revival was short for the Embarcadero. Most of San Francisco’s ship-to-freight rail business transitioned to container shipping at the larger, modern Port of Oakland. 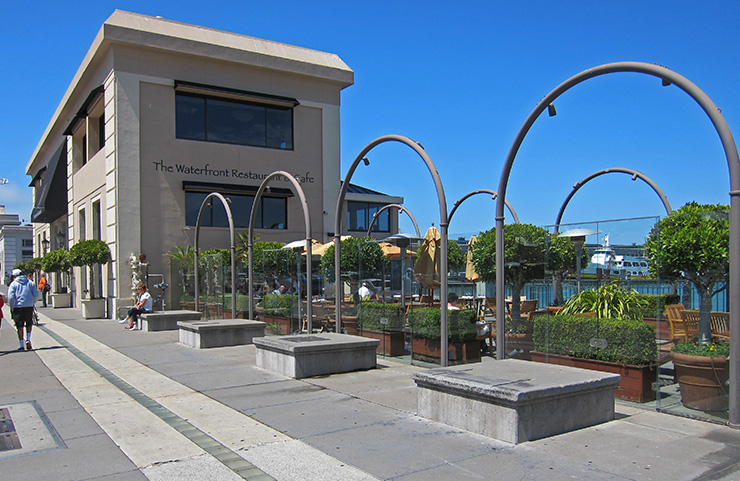 Waterfront Restaurant on The Embarcadero

The war also triggered one good thing for San Francisco and Oakland. The shortage of manpower opened streetcar and bus driver jobs to African Americans, Asian Americans and Latino-Americans. Nevertheless, the Key System and San Francisco Muni streetcars were the next victims of transportation mode change.

The 1950s conspiracy between auto, oil and tire companies bought out streetcar lines nationwide. Their hand was strengthened by the 1955 decision to build an Interstate Highway System. Taxpayer funding went to more freeways, extending the advantage of autos over ferries, streetcars and passenger railroads. In 1958, the Embarcadero Freeway began construction based on a plan that would ultimately extend it to the Golden Gate Bridge.

In between the bad news for transit, there was a bit of good news for The Embarcadero. In 1957, Muni reconfigured two cable car lines to extend from the downtown hotel and retail district to Fisherman’s Wharf. The arrival of more tourists not only saved the cable cars, they prompted redevelopment of the Ghiardelli Square, The Cannery and the rest of Fisherman’s Wharf into major tourist attractions.

By the 1960s, the elevated Embarcadero Freeway improved auto access from downtown to the Bay Bridge, but its hideous pylons divided many piers and the Ferry Building from downtown. As highway expansion drained San Francisco and Oakland streetcar ridership, lines to the Ferry Building gradually died. By 1982, the last streetcar service in San Francisco ended — many thought forever. Then providence played a hand.

Troubled by the tragic collapse of the double-decker Freeway in Oakland during the 1989 Earthquake, many believe that only a miracle spared the severely damaged double-decker Embarcadero Freeway from a similar fate. After the elevated freeway was torn down in 1991, a palm-lined boulevard with inviting plazas emerged by the late 1990s. Muni light rail service ran south on The Embarcadero to the Caltrain station and businesses large and small opened along the way.

When the Muni F-line Streetcar opened in 2000, it re-introduced vintage streetcars linking downtown, the Ferry Building, Piers 1-39 and Fisherman’s Wharf. The F-line streetcar was an immediate hit and today carries far more people on the northern Embarcadero than the Powell-Mason and Powell-Hyde cable cars combined. 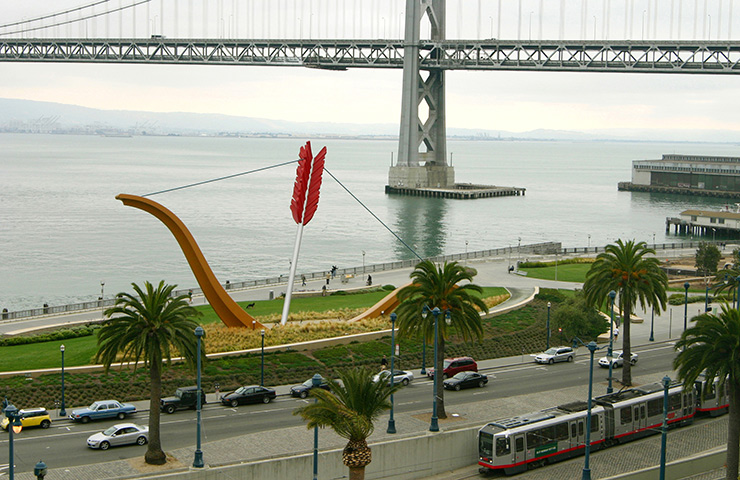 Cupids Bow on the Embarcadero

The southern Embarcadero was not forgotten. Most derelict piers were removed unveiling ground-level vistas of the bay and bridge that hadn’t been seen in over 100 years. San Francisco’s famed baseball park (now called “AT&T Park”) and upscale condos opened in 2000-02 along the southern Embaracadero. Cupid’s Bow sculpture was built in the Rincon Park area in 2003. Resembling Cupid’s bow and arrow with the arrow implanted in the ground, the statue was inspired by San Francisco’s reputation as the home port of Eros, hence the bow and arrow of Cupid.

Before the 1989 Earthquake, it was inconceivable that Embarcadero restaurants would attract magnificent public artwork and celebrity chefs. Today, The Embarcadero stands as a monument to public planning. It has an aesthetically cohesive feel from AT&T Park to the Ferry Building to Fisherman’s Wharf. Now dining on gourmet Peruvean cuisine at La Mar Restaurant on Pier 1 1/2 is as common as a sumptuous meeting with crustaceans at The Crab House on Pier 39.

More goodness is coming. The Exploratorium science museum moved to The Embarcadero in 2013. The new cruise ship terminal took its bow in 2014. Another landscaped park is in advanced planning. Stay tuned.