San Francisco International Airport (SFO) is a busy international airport. If you have a 1+ hour layover before boarding, consider visiting art galleries between each terminal and the architecturally bold International Terminal. Like every world-class airport, SFO features an array of restaurants, cafes, lounges, coffeehouses, gift shops, restrooms, wifi, business services, and nearby hotels. Navigating the circular 4-terminal airport is easy using this SFO TERMINAL MAP.

AirTrain Automated People Mover circulates outside all terminals and stops at BART-SFO Transit Station and SFO Rental Car Center. Travelers commuting to San Francisco or Oakland should exit AirTrain at BART SFO Station, then walk down one level to catch the BART Dublin-Pleasanton Train. Travelers commuting southbound should pay $4 to ride a different BART SFO Station train to BART-Caltrain Millbrae Station. Upon arrival at Millbrae Station, locate the vending machine and purchase a Caltrain ticket headed to a southbound destination on San Francisco Peninsula.

Located 1 block from BART and Muni Metro rail systems and 3 blocks from the Ferry Building, Amtrak shuttle bus runs from San Francisco’s Salesforce Transit Center across the bay to Oakland Amtrak Station at 245 2nd Street in Jack London Square. From there you can board these Amtrak routes:

Bicycles are permitted on BART during the mid-day, night-time, and weekends. Since station floors are even with train floors and each station has elevators, BART is wheelchair accessible. BART LED displays and audible messaging tell you when the next train arrives. All BART trains run through Oakland. The BART Berryessa/North San Jose-Richmond line does NOT go to San Francisco. Notice that BART SYSTEM MAP uses endpoint line names:

If you are familiar with Metro system ticket dispensers in NYC, LA, Chicago, Washington, Philadelphia, Boston, Baltimore, Atlanta, or Miami, you’ll easily grasp the same approach for BART ticket dispensers. Otherwise, you’ll spend a couple of minutes figuring it out with cash, debit card, or credit card. Fares are distance-based.

Since BART commuters may travel up to 40 miles in one direction, the highest one-way fares reach $8. Better yet, purchase a discounted Clipper Card to interchangeably travel on all transit modes in the San Francisco Bay Area. BART hours of operation are:

Transfer underground from BART to Muni Metro at any of four (Embarcadero, Montgomery, Powell, Civic Center) downtown BART-Muni Metro stations. Transfer from BART to ferries by deboarding at Embarcadero Station, then walk 2 blocks east to the Ferry Building.

Think you’ll feel queasy riding BART 7 miles under the San Francisco Bay? History suggests there is little reason to worry. When the 1989 Earthquake disabled San Francisco-Oakland Bay Bridge, the well-engineered BART system continued running. Like other aging Metro systems, however, it can be delayed by occasional mechanical/electrical failures. To the relief of commuters, BART is currently upgrading electrical systems, replacing worn tracks and old transit trains. 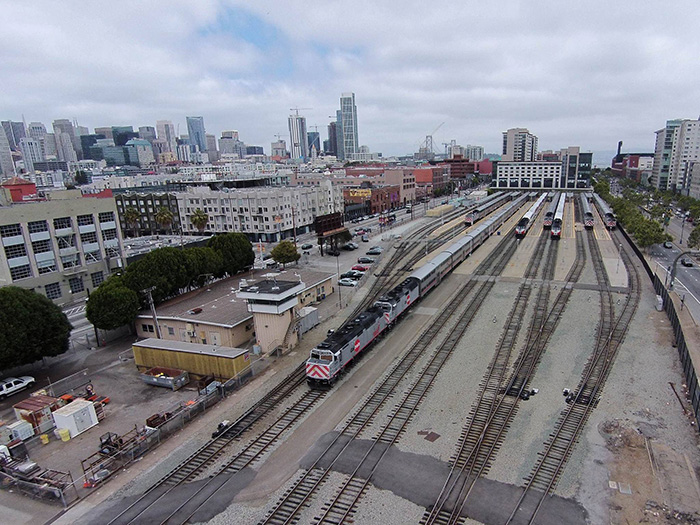 Caltrain commuter rail has a spartan 4th & King Station near AT&T Baseball Park, but 1.3 miles south of downtown. Service runs every 20 minutes during commute hours in its 47-mile journey down the San Francisco Peninsula. Caltrain has overhead passenger luggage racks and runs up to 79 mph between San Francisco and San Jose. It also has a few limited-stop express trains during commute hours. When you look at this CALTRAIN SYSTEM MAP, consider that Millbrae, Burlingame, San Mateo, Redwood City, Palo Alto, Mountain View, Sunnyvale, Santa Clara, and San Jose Diridon are popular stations with nearby amenities and/or major transit connections.

Millbrae Station allows Caltrain commuters to transfer to a BART train that goes to SFO Airport for $4. You can also transfer (with a different pre-paid ticket) to Amtrak trains at Santa Clara and San Jose Diridon Stations. In 2024, Caltrain transitions from diesel to electric power for faster speeds and more frequent trains.

When riding Muni Metro, you experience its evolution from streetcar to light rail system. MUNI METRO SYSTEM MAP indicates six Muni Metro lines that run from 5a-12p Sunday-Thursday and until 1a on Friday-Saturday:

Automatic ticket dispensers are on each underground station and surface station platform. If you board from a surface station, remember that you must be prepared to present a ticket when asked by Muni attendants who check trains.

Muni Vintage Streetcars are fully restored moving cabins from Italy, England, Russia, Australia, Japan, Germany, Portugal, and nearly a dozen domestic cities. These hand-crafted conveyances travel at 9-10 mph, which is perfect for casually observing attractions along the way. The price is $2.50 per ride with free transfers that last 90 minutes from purchase.

Vintage Streetcar patronage in San Francisco has become as popular as Cable Cars. We highly recommend taking Muni E Line Streetcar runs from anywhere on Market Street to the Embarcadero and Fishermans Wharf, where it circles back.

Opened in 1873, Muni Cable Cars are one of the few moving National Historic Landmarks in America. Even at $5 per ride, these treasured relics are worth it for exhilarating views of steep San Francisco hills. When you board, watch drivers get a workout applying the heavy grip on the underground cable moving at 9 mph. Before you exit the vehicle, wait until the driver ungrips the cable, sets the brake to a full stop, and rings the bell. Watch for autos and only use the designated crosswalk at street intersections. The Green X sidewalk signal is “Go” for cable cars, not pedestrians.

The Cable Car Museum at 1201 Mason Street, shows the powerful cable gears at work. Though not indicated on the CABLE CAR MAP, all three routes provide awesome vistas, entertaining bell-ringers and come within 1-3 blocks of the Cable Car Museum:

The combination of BART, Muni Metro, Vintage Streetcars, and Cable Cars travel within 3 blocks of most city attractions. Also, Clipper Card is a reloadable smart card for electronic transit fare payment on all San Francisco Bay Area modes of transit, including ferries.

San Francisco Cruise Port at Pier 27 and 35
DESCRIPTION: Prior to 1991, major cruise lines rarely docked at San Francisco’s port that was blighted by a doubled-deck freeway. Then demolition of Embarcadero Freeway followed by The Embarcadero Roadway and Pier Facade beautification projects led to a modest clean-up of Pier 35. Today it hosts ~80 cruise ship calls annually by Carnival, Royal Caribbean, Princess, Celebrity, NCL, Holland America, Cunard and Silversea. They utilize San Francisco as a Port of Call for routes to Alaska, Vancouver, Seattle, Los Angeles, San Diego, Mexico Riviera and Hawaii. Since the cruise industry is upgrading to larger (3000-4000) passenger ships on the Pacific Coast, San Francisco upgraded Pier 27 to host with an attractive terminal with public plaza passenger amenities that open to The Embarcadero for ground-to-ship vistas. Pier 35 is now a supplemental port to dock large cruise ships simultaneously with large cruise ships docked at Pier 27.
ADDRESS: Pier 35 and Pier 27 on The Embarcadero.
TRANSIT: Muni Metro F-Line stop at The Embarcadero & Greenwich Street
PARKING: City Park garage at 80 Francisco Street and Ace Parking at 55 Francisco Street & The Anchorage Center
PHONE: Contact the cruises lines for their respective ship info
WEBSITE: Link

Victorian Home Walk Tour
DESCRIPTION: Experienced tour guides have shown visitors to SF’s world-famous architecture for over 14 years. For 2.5 hours, they go where tour buses are not allowed, without hills. They hold a yellow sign that says “Victorian Home Walk”; arrange a private tour for 10 or more. They include transportation to Pacific Heights, a stroll through the best Victorian neighborhoods, and a visit inside a Queen Anne Victorian house.
PRICING: $25 per person, no credit cards; fee collected at end of the tour
ADDRESS: San Francisco; departs 11a daily from Union Square; no reservations required
PHONE: 415-252-9485
WEBSITE: http://www.victorianwalk.com

GoCar
DESCRIPTION: A clever storytelling GPS-guided mini-car that gives you an open-air touring experience unlike any other. Select from 5 languages that guide you to the major attractions of San Francisco. The two-seated, three-wheel vehicles fit in the tightest places that a bus tour can not touch. It’s eco-friendly too.
PRICING: 1st hour $49, 2nd hour $39, each additional hour $29, No further charge after 5 hours
ADDRESS: San Francisco; pick-up/drop-off at 2715 Hyde Street or 321 Mason Street
PHONE: 415-441-5695
WEBSITE: http://www.GoCarSF.com

Bike and Roll San Francisco
DESCRIPTION: Take a beautiful bicycle ride on the Bay Trail over the Golden Gate Bridge to Sausalito with a return trip to San Francisco by ferryboat! The tour is an easy 9-mile adventure as most of the ride is flat and the last 3 miles are downhill. Sights of interest include Fisherman’s Wharf, Aquatic Park, Ghirardelli Square, Fort Mason, Palace of Fine Arts, the Presidio, Fort Point, the Golden Gate Bridge, Sausalito shops, Alcatraz and Angel Island.
PRICING: Begins at $10 per day
ADDRESS: 899 Columbus Avenue, San Francisco
PHONE: 415-229-2000
WEBSITE: http://www.bikeandroll.com

San Francisco Freeway Network is well developed in terms of traffic status signs, carpool lanes and metered entrance ramps. Traveling westbound on San Francisco-Oakland Bay Bridge (locally called “Bay Bridge”) remains crowded during commuter hours. When traveling westbound on the Bay Bridge, you pay a toll. Traveling eastbound is FREE. Avoid traffic tickets, DO NOT USE Bay Bridge Fastrak lanes without a pre-paid toll transponder on your vehicle. Some car rental agencies include them for a fee.