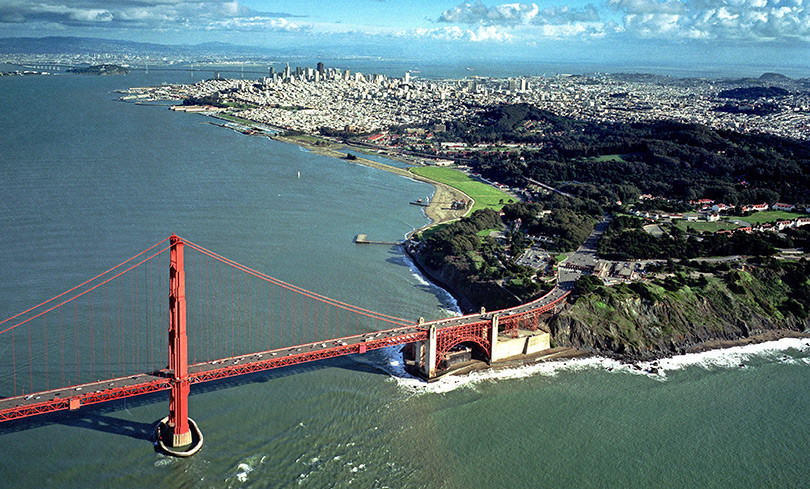 Its easy to think of the Golden Gate Bridge, Golden Gate Park, Cliff House and Ocean Beach as attractions on the other side of San Francisco. For savvy travelers, San Francisco Presidio makes it on the same itinerary — if only for a drive-through. The Presidio was a military reservation for 200 years until closing in 1994. Then it became a 1491-acre national park. This dual nature makes it historically rich, stunningly beautiful and politically contentious.

George Lucas of Star Wars fame opened a branch of his Lucasfilm movie production empire in the new Letterman Digital Arts Center, an area once occupied by out-dated military housing. As with many things in San Francisco, Lucasfilm arrival in the Presidio was fought by others who wanted the Presidio completely converted to a national park. We are happy to report that their housing-to-office conversion blends nicely in the old forest setting of the Presidio. The Lucasfilm lease and other leases subsidize improvements to many of the 800 buildings. Among the 470 on the National Registry of Historic Places, the Presidio Officers Club features a large calendar of public programs, including live music, dance, speeches, films and family craft days. The Presidio Bowling Center includes a bar and grill that offers burgers, sandwiches, fries and more.

The Presidio hosts a military museum and Walt Disney Family Museum. The latter museum opened in 2009 as a 40,000 square foot venue honoring the creator of global symbols, icons and characters that are mainstays of pop culture. The stories of Walt Disney’s life, creativity, family, and innovations he brought to life are told through state-of-the-art exhibits in ten interactive galleries. The Walt Disney Family Museum contains original drawings that Walt Disney made in his youth, cartoons from Laugh-O-gram Films, Disney’s first company and the earliest known drawings of Mickey Mouse.

Many visitors who sight-see through voluminous Monterey Pines along Lincoln Blvd, Washington Blvd and Arguello Blvd, cast a glance at dangerous ocean riptides off Bakers Beach or view the latest sports match at Crissy Field. There’s a march field next to Crissy Field, which is superb forbid-watching. Park your car near the city side of Golden Gate Bridge and follow the signs to Fort Point under the bridge for the world’s greatest view of man-made bridge meets ocean. Better yet, enjoy a Sunday afternoon picnic in the green area of Main Post. Rob Hill Campground welcomes 16,000 overnight campers annually. A free frequent shuttle, PresidiGo, has many hop-on-hop-off sites within the park. That comes in happy when exploring 24 miles of hiking trails, 15 miles of biking trails and 8 scenic overlooks in the park.

The Presidio also has a nationally-recognized 18-hole golf course, driving range and practices area. It has a full service restaurant, Arguello, and a new visitor center to plan your itinerary. Inn at the Presidio and soon, Lodge at the Presidio, provide character-filled historic hotel lodging in this natural park with views of the forest and Golden Gate Bridge.

The most historic part of the Presidio is Fort Point Museum which anchors the southern end of Golden Gate Bridge. Fort construction began in 1853 by the U.S. Army Corps of Engineers. The lowest tier of artillery is located close water level, so cannonballs could ricochet across the water’s surface to hit enemy ships at the water-line. Workers blasted the 90-foot cliff down to 15 feet above sea level. The structure featured seven-foot-thick walls and multi-tiered casemated construction typical of forts in that era. Among military exhibits in the museum, the Buffalo Soldiers gallery is captivating.